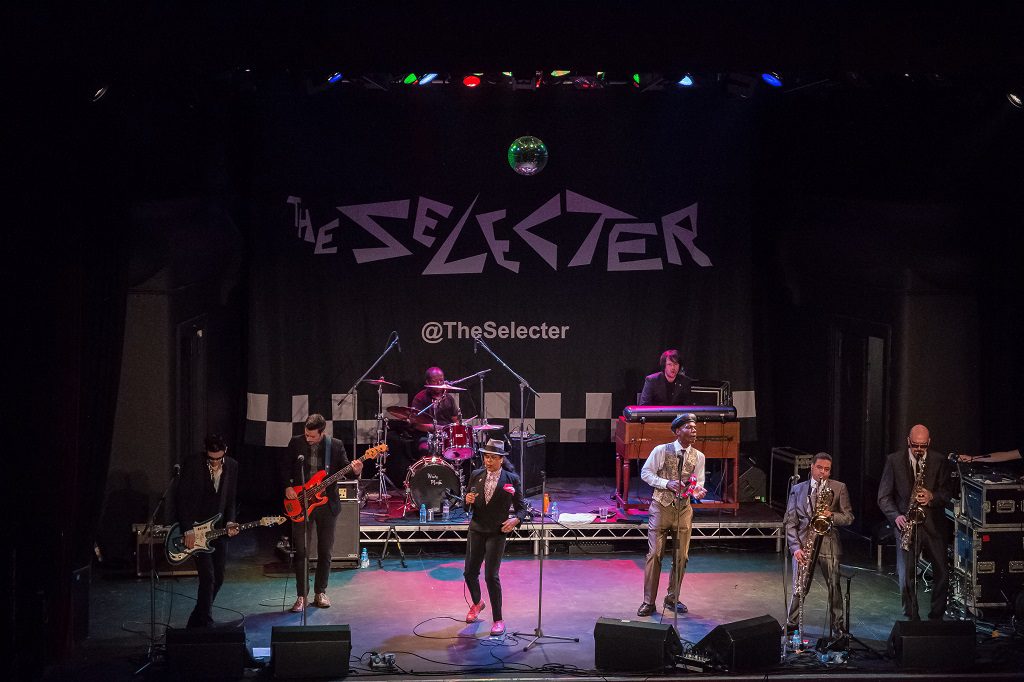 Paisley gig-goers gave a rapturous reception to a trailblazing musical export of one of the town’s UK City of Culture bid rivals. The Selecter – who emerged from Coventry to be one of the most successful ska bands from the two-tone era in the 1970s – played a packed-out Paisley Town Hall at the weekend.

Paisley and Coventry are both bidding for UK City of Culture 2021, and are united through their musical roots.

In the 70s both Paisley and Coventry provided the backdrop to two of the UK’s most noted youth subcultures, which influenced music, fashion and politics. Paisley became a centre for the west of Scotland punk scene following a ban on punk bands playing in Glasgow, while Coventry was noted for the ska revival movement and The Selecter’s politically-themed lyrics and diverse line-up.

The Selecter were supported by local band Dogtooth and DJ Kurtis Whitelock as part of organiser’s LNP Promotions’ commitment to providing young people with opportunities to play with bigger bands when they come to town.

The UK Government’s Department of Culture, Media and Sport started the UK City of Culture competition to build on the success of Liverpool’s year as European Capital of Culture 2008, which had significant social and economic benefits.

Paisley’s bid aims to transform the town – Scotland’s largest – by using its unique cultural and heritage offering as the home of the Paisley Pattern and one-time centre of the global textile industry.

Last month, communities in Ferguslie Park were once again listed as the most deprived in Scotland following release of the Scottish Index of Multiple Deprivation 2016 statistics, reinforcing the drive for the UK City of Culture title in 2021.

Coventry is also looking to change perceptions of a city that has had to reinvent itself and is now one of the most diverse cities in modern Britain. Its first radical was Lady Godiva while the city gave birth to 2-Tone movement and Theatre in Education.

The Selecter is fronted by the iconic Pauline Black and recently headlined three UK tours and recorded three studio albums – with the latest album Subculture receiving critical acclaim. After playing in Paisley, The Selecter will head to America before finishing the tour in their home city.

Jean Cameron, Paisley 2021 Bid Director, said: “Paisley is a town of music and musical talent – Paolo Nutini, Gerry Rafferty among others – so it was no wonder that the town hall was packed for this fantastic gig.

“The Selecter’s home city is Coventry and it was brilliant that they talked openly about both bids, showing that while this is a competition, there is also friendship.

“I wish The Selecter all the very best on their American tour before hosting the last gig of that tour in Coventry.”

Gary Kerr of LNP Promotions said: “Friday was an amazing day. We are so fortunate to spend time with wonderful people and top class performers.

“When artists of the calibre of The Selecter come to Paisley, the people come out to support them. We are building on recent success and hope to attract even more bands and performers to Paisley. When we are able to, we’ll give young people an opportunity to share the stage.

“We were delighted that The Selecter agreed that Kurtis and Dogtooth supported them. Pauline and all the band were really supportive on the night, going out of their way to offer advice and encouragement. Most encouraging thing for us is the impact our events are having on the people and local economy, Paisley was alive and vibrant.

“It just highlights the impact arts and culture can have on people. On Friday, Paisley was full of happy people, a busy and vibrant town, fantastic. Both myself and Tommy are very grateful for everyone’s support.”

Laura McMillan, manager of the Coventry City of Culture Trust, said: “Coventry is looking forward to working with other bidding cities to share our culture and showcase all of our destinations. Our recent event, Atomic at Coventry Cathedral, featured Scottish band Mogwai along with Coventry born film-maker Mark Cousins.

“Pauline Black and The Selecter are a wonderful example of Coventry’s diversity and its role in bringing elements of sub-culture into the mainstream.”

UK City of Culture bids are expected to be lodged with the Department for Culture, Media and Sport in spring 2017.

Anti-poverty programmes save £3m for Renfrewshire residents
Scroll to top