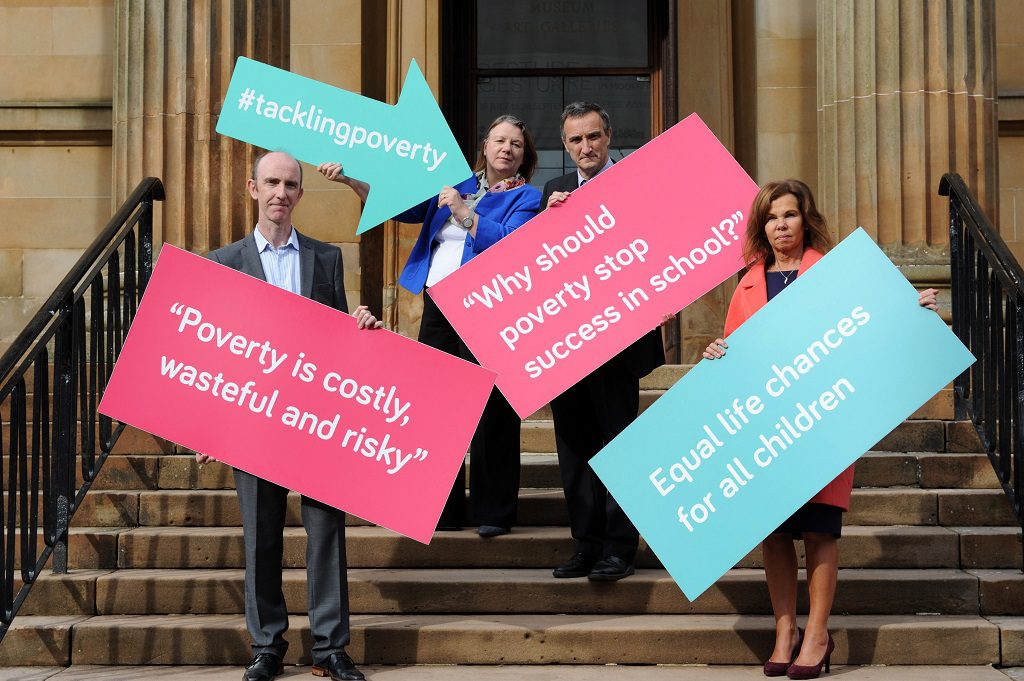 Innovative anti-poverty programmes have put more than £3m into the pockets of Renfrewshire’s hardest-pressed families. Renfrewshire Council’s Tackling Poverty programme was the first of its kind in Scotland – and members of the commission whose report preceded it today returned to Paisley to see how their recommendations are being brought to life.

The programme is made up of more than 50 individual projects covering education, health, income support, employability, and digital and cultural inclusion. Since the programme started in summer 2015 it has:
– allowed almost 1,000 home visits by energy advocates, cutting almost £270,000 from residents’ household bills;
– created 600 new credit unions members across Renfrewshire, saving them £85k in interest payments compared to high-street rates;
– put £84k into year one of a cost-of-the-school day fund – the first of its kind in Scotland – breaking down the barriers for less-affluent pupils;

That work complements the council’s existing Families First early-years scheme, which has helped residents claim £2.7m in benefits they didn’t know they were entitled to.

The Tackling Poverty programme has funded three new Families First locations from earlier this year, to add to the two which had been running in Ferguslie and Linwood since 2013.

Other achievements since the Tackling Poverty programme started include:
– more than 750 primary school teachers trained in literacy coaching through a programme unique to Renfrewshire;
– a 72% reduction in sanctions on Jobseekers Allowance claimants in the area;

The original commissioners included a range of local and national experts from the fields of education, health, housing, industrial relations, social affairs and more.

They and other guests were invited to Paisley Museum for an interactive showcase of some of the key Tackling Poverty Programme projects by the staff running them.

That included a unique scheme to increase literacy skills in partnership with the University of Strathclyde, the award-winning youth diversionary Street Stuff scheme, and a Making Futures project to engage young people in culture.

He said: “Renfrewshire is a diverse area but deep-seated pockets of deprivation remain in some of our communities – as was shown this summer when government stats showed Scotland’s most deprived area was in Ferguslie Park in Paisley.

“These are long-term problems to which there are no easy fixes – and only a long-term solution will suffice.

“But this council was determined to take a fresh approach, which is why we pulled together a group of national experts and prioritised a £6m investment.

“I am pleased to say the work we are doing has attracted widespread attention and Renfrewshire is now recognised as leading the way in taking on poverty – several other Scottish councils have now followed our model.

“Today’s event was a way to thank our commisioners for their input and show them the steps we have made to act on their recommendations.

“I am immensely proud of the work the programme has done over the past 18 months – and would like to thank all the staff from the council and our partners across all 50 projects for everything they are doing.”

He said: “Renfrewshire has been one of the first areas to take such a comprehensive view of mapping out the causes of poverty – and across partners, not just the council.

“I see a big focus on removing cost barriers on families. There is reason to be optimistic about the long-term prospects for the area.”