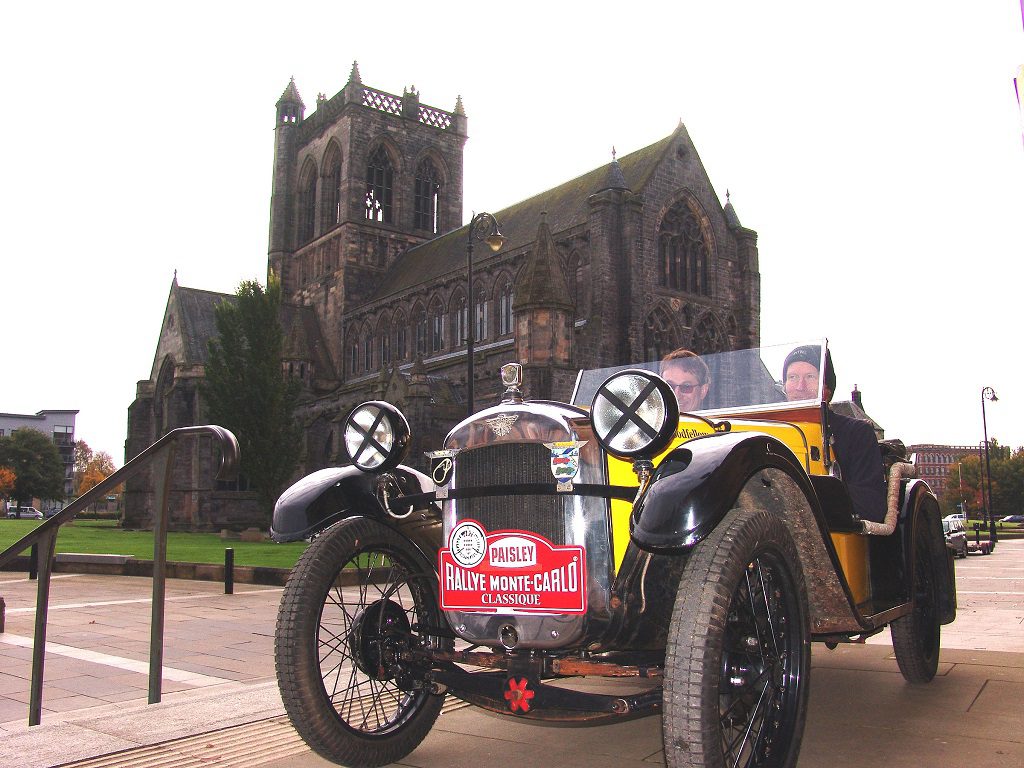 The town of Paisley has once again been confirmed as the sole UK start point for the 2017 historic rally run to Monte Carlo. It’ll be the fourth time the town – which is bidding to be the 2021 UK City of Culture – will be the only British start point out of seven European cities for a range of historic cars to make the 1300 mile trip to the South of France. Close to a hundred cars are expected to leave the start ramp outside Paisley Abbey at 6pm on Wednesday January 25th in three separate categories.

The Historique class is being run for the 20th year and is restricted to car models which competed in the Monte Carlo Rallies between 1955 and 1980. It will run over eight days on open public roads with the cars and crews having undertaken a series of fourteen demanding test stages in the mountains of southern France. The Classique event is for older cars from as early as 1911 to 1980 and follows the same route to Monte Carlo but does not include any test stages, the goal simply being to finish in Monte Carlo after checking in at a series of control points on the way.

Once again the event will feature the popular Monte Heritage Runs which will follow on from the full-scale events and will take in a series of short classic routes in Scotland.

In January this year a crowd of more than 10,000 gathered in the centre of Paisley with the magnificent backdrop of the Abbey to wave off the crews in a party atmosphere with lights, music, street food and fireworks…..and working with staff from Renfrewshire Council and volunteers from many motorsport clubs in Scotland the organisers are confident of making the start even bigger and better next year.

The event was officially launched this morning by Douglas Anderson, the UK co-ordinator and the man responsible for bringing the Monte back to Scotland in 2011.

He believes the 2017 start will be the best yet.

He said: “The Paisley Abbey Start will flash round the world on the evening of 25th January 2017.  It is universally acknowledged as the best start in Europe and with the help of the good folk of Paisley who come out in their thousands to cheer the competitors on their way, we will keep it that way.”

Also there was one of the entrants in the 2017 event, Andrew Goodfellow from Dundee and co-driver, his brother-in-law Derek Coghill and their 1930 Austin 7 Ulster 2-seater sports which will – hopefully – complete the drive to Monte Carlo.

Said Andrew: “What a fantastic opportunity this is to take part in this historic event and were both totally confident that we and the car will make the 1300 miles. We’ve been prepping the car over the past month with still lots more to do to it to ensure everything is in top condition before we set off. The only concern is the very strong likelihood of snow while driving through the Alps.”

Their drive will also raise funds for SAMH, the Scottish Association of Mental Health.

The event is being supported by Renfrewshire Council. Leader Mark Macmillan said: “We are delighted to be hosting the only UK start leg of the Monte Carlo Classic Rally here in Paisley again in 2017, for the fourth year in row.

“Next year we will be submitting the town’s bid for UK City of Culture 2021, and to have this prestigious and truly international event  in the town centre just helps cement Paisley’s status as a key destination on Scotland’s map of major events.

“The people of Renfrewshire and beyond have always turned out in huge numbers to wave the cars off against the striking historic backdrop of Paisley Town Hall and Abbey, and I am sure they will be as excited as we are to welcome the event back.”

Giving his backing to the event is Scotland’s latest motorsport champion, Gordon Shedden, who won the British Touring Car Championship for the third time earlier this month.

He said: “Scotland has such a proud history in motorsport and it’s great to see Paisley as the only UK start point for this classic event. The Honda Civic Type R in which I compete is the latest example of car technology but I love getting behind the wheel of something from the past. I wish everyone taking part the very best of success…..and an enjoyable and safe drive to Monte Carlo.”

More information can be found at  www.monte.scot