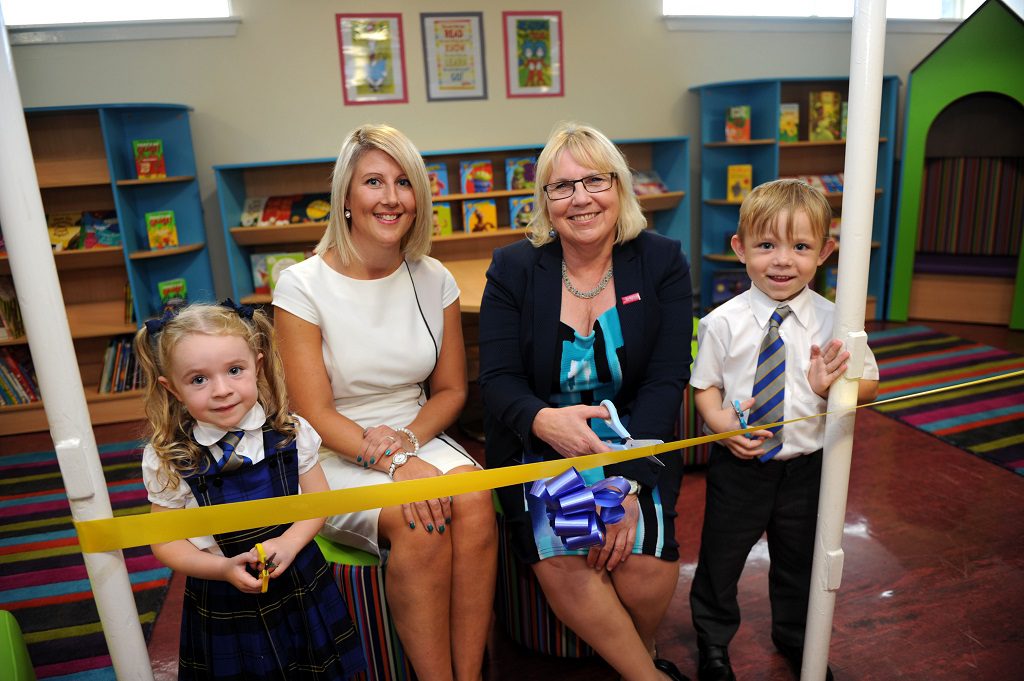 Pupils at a Renfrewshire school have swapped boxes for books after staff turned a school storage area into a new early-years library. Hilary Paterson and Cllr Jacqueline Henry with pupils at the school

And the new facility has been a hit with youngsters at Heriot Primary in Foxbar – some of whom have said they like the library so much they don’t like to leave.

The new facility was officially opened when Renfrewshire’s education convener Jacqueline Henry popped by for a visit. Head teacher Hilary Paterson said: “It was an area of the school we were using for storage, but it has now been transformed into an early-years library.

“What we want is for each child to pick up a book and to experience the joy and the escapism you can get from doing that.

“One pupil was in there last week and turned around to his teacher and said he couldn’t believe it would be a whole week until they could go back!

“We’ve been using it since the start of term and it’s for the nursery up to Primary 4 – each class is given a time slot to go there.

“It’s also being used for reading buddy scheme, which pairs up one of the older children with one of younger ones.”

Heriot Primary is also home to the Foxbar branch of the council’s Families First programme – an innovative early-years project designed to help parents give their children the best start in life.

Councillor Henry added: “I was delighted to be invited to Heriot Primary to open the school’s new early-years library – it looked like a great facility and you could see the pupils loved it.

“One of the big priorities of this council is to raise attainment in schools – and we have identified early-years literacy as one of the key ways to do that.

“Our innovative literacy programme, run alongside the University of Strathclyde, is training our teachers to help their pupils improve their reading skills.

“And it’s also lovely to know the facility could be used to help the Families First team continue the great work they do with local parents.”