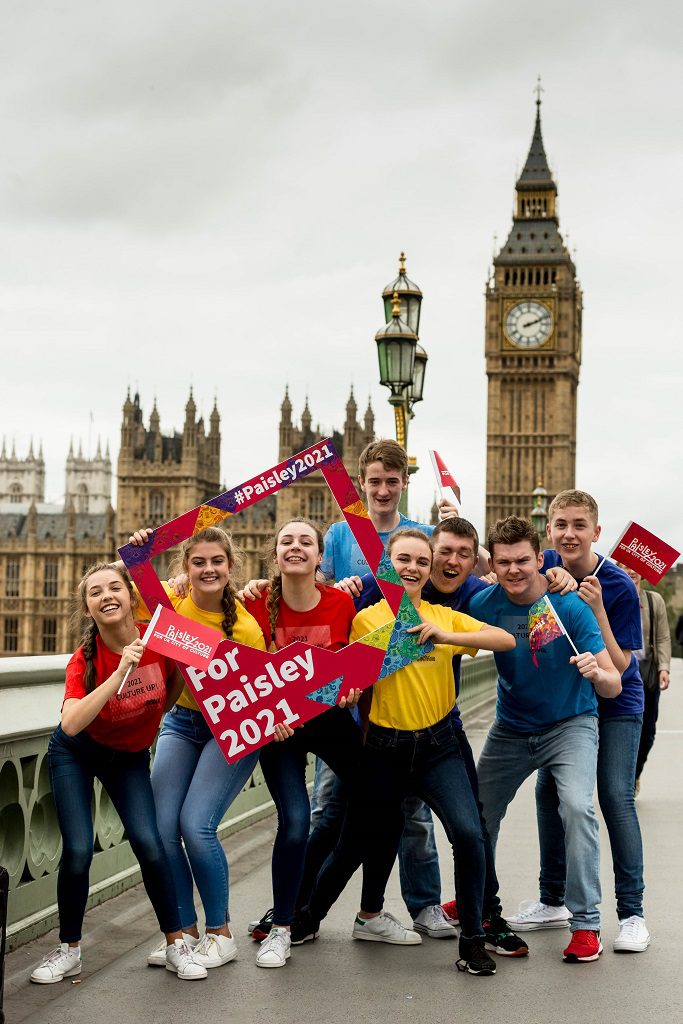 A delegation representing Paisley’s bid for UK City of Culture 2021 met with an audience of parliamentarians, business leaders, media and key cultural figures in the House of Commons today (Tuesday  6 September). Members of the Paisley 2021 bid team, accompanied by a group from PACE Youth Theatre, joined Renfrewshire MPs, Mhairi Black and Gavin Newlands, in hosting a celebration of Paisley – Scotland’s largest town, at Westminster.

A large audience were treated to a performance from PACE and listened to speakers detail the strength of Paisley’s bid and the town’s drive for UK City of Culture 2021. The group, led by Renfrewshire Council Leader and Chair of the Paisley 2021 Partnership Board, Mark Macmillan, and Paisley 2021 Bid Director, Jean Cameron, are the first delegation representing any of the locations bidding for the UK City of Culture accolade – run by the UK Government’s Department of Culture, Media and Sport, to hold such an event at the House of Commons.

Town leaders believe that the bid for UK City of Culture 2021 will help to transform Paisley future by using its unique cultural heritage as the home of the Paisley Pattern and one-time centre of the global textile industry, to attract tourism investment as well as promote further job growth and economic stability across all of Renfrewshire.

The bid will harness the power of culture to tackle deep-rooted poverty in communities identified as the most deprived in Scotland, and will place the artistic community at the heart of the town’s cultural, social and economic transformation. There is already widespread grass roots support for the bid.

The bid is just one part of Renfrewshire Council’s plans for the wider regeneration of Paisley and Renfrewshire, including the £56.7m refurbishment of Paisley Museum and a number of projects being delivered as part of the Glasgow City Region City Deal – worth £274m to Renfrewshire.

Jean Cameron, Bid Director for Paisley 2021, said: “The opportunity to bid for the UK City of Culture title in 2021 has ignited a new conversation about Paisley and we are seeing a real surge in support for our bid, highlighted by the level of interest shown in our story in London.

“Culture means different things to different people but the role it has to play in our lives is profound and important to everyone – helping us to reach our fullest potential while finding joy in the experience. Paisley has a proud heritage and a vibrant cultural scene, which will be boosted further by the international spotlight which would accompany being UK City of Culture in 2021.”

Councillor Mark Macmillan, Leader of Renfrewshire Council, said: “Paisley and its surrounding areas, like many towns and cities, has challenges to face but we are confident that we can tackle those head on. The Department for Culture, Media and Sport has tended to award UK City of Culture status to a place which has a clear plan to use the title to transform its fortunes – there is a proven link between culture and well-being and we want to use the power of that to make people’s lives better.

“Paisley has much to offer and there are few places of similar size with the same depth of tradition, heritage, talent and passion for improvement.

“We are committed to building a better future for all of Renfrewshire and there is a great sense of positivity across the region that we can achieve that goal. The presentation delivered in London underlines the pedigree of Paisley’s bid for UK City of Culture 2021 and the feedback we received gives us confidence going into the next stage of the bid process.”

Renfrewshire MPs Mhairi Black and Gavin Newlands were joint hosts of the event which took place in the Strangers’ Dining Room in the House of Commons.

Mhairi Black MP, said: “I’m immensely proud to represent Paisley and Renfrewshire South in Parliament and never more so than today as the Paisley 2021 team and PACE did a fantastic job of showcasing what my home town has to offer. We have shown that Paisley’s bid is a serious and more than worthy contender to win the right to become UK City of Culture 2021.”

Gavin Newlands MP, added: “Being born in Paisley, it’s easy for me to feel a strong connection to the town. Today’s event has shown people here in London the extent of Paisley’s ambitions and strength to be able to deliver those aims, and change the future for some of the country’s most deprived children. Paisley is the home of the world renowned Paisley Pattern and it deserves to be as equally well known for nurturing the talent and passion of all its young people, some of whom did their town proud today.”

Bids are expected to be lodged with the UK Government’s Department for Culture, Media and Sport in Spring 2017, with the winner announced in Autumn 2017.