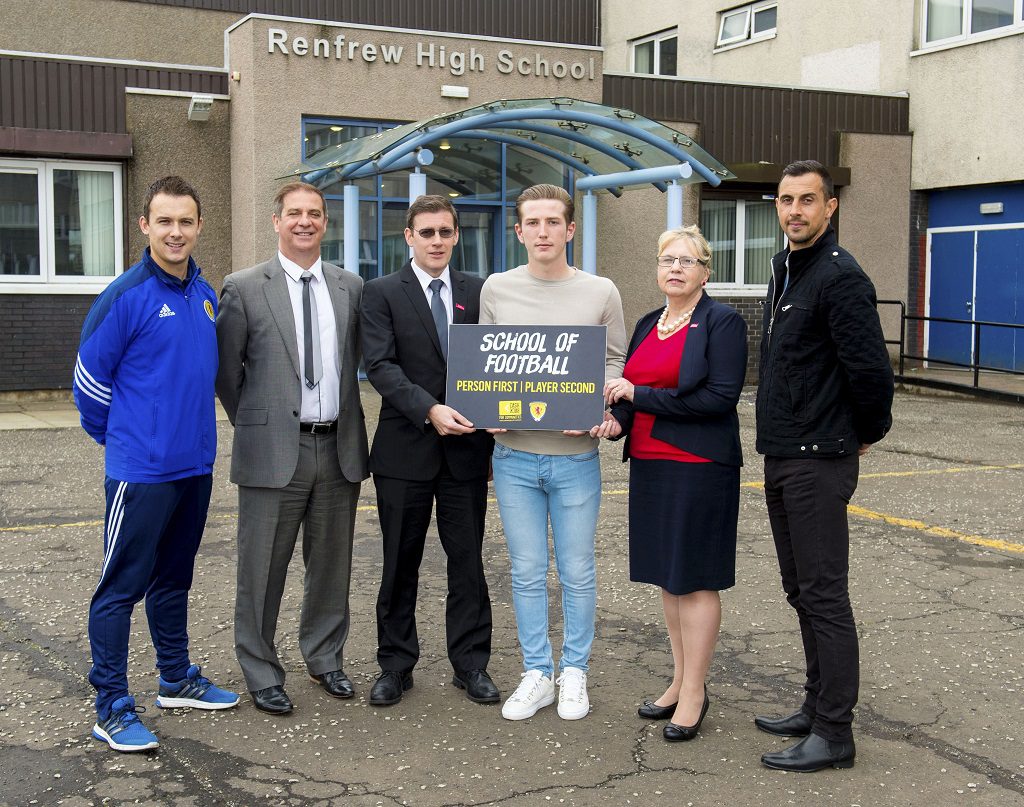 A St Mirren player who has been tipped for footballing stardom went back to his old school – to tell current pupils how his time there helped kickstart his career. Kyle McAllister, 17, was among the first pupils to benefit from Renfrew High’s School of Football status – an innovative link-up with the Scottish Football Association which aims to use the power of sport to help develop pupils.

Since leaving school in 2015, Kyle has signed a full-time contract, made his Saints first-team debut, and starred for Scotland under-17s.

The SFA Schools of Football are about more than just playing ability, they aim to mould better citizens and develop social and academic abilities through football. The programme sees S1 and 2 pupils follow an enhanced timetable which includes a period of football activity run by SFA coaches every day.

Kyle met the 30-strong current School of Football class for a Q&A session, during which he covered topics as diverse as the best players he has played with and against, and whether he gets nervous before games.

He also revealed his favourite subject at school was PE and the club he would most like to play for is Real Madrid.

He advised the pupils to ‘work hard and try to do extra training if you can’ but added that his time at the School of Football gave him the chance to do that.

Renfrew High is one of two Schools of Football in Renfrewshire – Castlehead High being the other.

Councillor Jacqueline Henry, convener of Renfrewshire Council’s Education and Children Policy Board, said: “We want our schools to be among the best in Scotland, and are delighted to have been working with the SFA on two schools of football here in Renfrewshire over the past few years.

“The first group of pupils to pass through the scheme in S1 and 2 a few years back have now left school and it was great to see the unique opportunities Kyle and others received have served them so well.”

Billy Burke, head teacher of Renfrew High added: “We feel privileged to be part of this scheme – not many in Scotland get the opportunity.

“A full range of footballing abilities take part and it has really helped develop every young person in terms of confidence, leadership and teamwork.

Paul McNeill, SFA West regional manager, said: “The School of Football is one of our best achievements in the past eight years in helping to develop young people.

“We are delighted Kyle came back to school to show the current crop of young people they can achieve anything they wish – whether it’s the ultimate goal of becoming a professional footballer or just gaining the confidence and skills to succeed at whatever they choose.”

More information about the School of Football programme is available at  www.scottishfa.co.uk