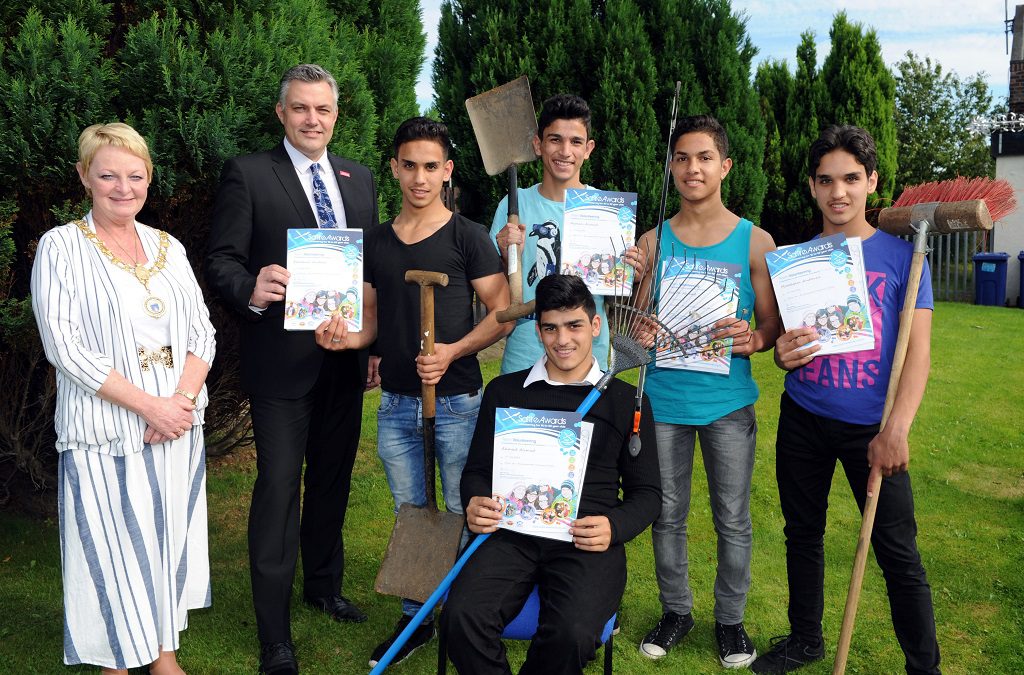 Five teenage Syrian refugees who arrived in Renfrewshire last year have been praised for their volunteering work with an environmental charity.

The boys are part of a small community of families welcomed to Paisley last November after fleeing the civil war in their homeland.

Renfrewshire welcomed 81 refugees from Syria under the Government’s vulnerable persons resettlement scheme – the third-highest of any area in the UK.

The boys, aged between 15 and 17, were presented with Saltire Awards for their work with the Environmental Training Team (ETT), which organises community clean-ups and not-for-profit enterprise including garden maintenance.

The boys – brothers Ahmad and Ayman Ahmad, Moatasem and Ebrahim Andoura and Issa Al Ahmad – are all pupils of Paisley Grammar and have been volunteering with the charity since June.

Renfrewshire Council staff arranged the opportunity for the boys through local volunteer co-ordinators Engage Renfrewshire, and paid for their travel costs.

And council leader Mark Macmillan was on hand to present the boys with their certificates at a small ceremony at ETT’s base in the town’s Ferguslie Park area.

He said: “We believe everybody has a moral duty to help those who are fleeing persecution and oppression.

“That’s why we are proud Renfrewshire was able to lead the way in Scotland by welcoming a community of Syrian refugees to the area last year.

“Council staff have worked hard to help the group settle in here – and it’s great to see the boys and their families integrating into the local community like this.

“I was delighted to be able to present these certificates to the boys and wish to thank them for their efforts.”

Alan McNiven, chief executive of local third-sector body Engage Renfrewshire, added: “This award is designed to encourage young people to develop their skills within a team and we were thrilled to be able to honour the boys for their efforts.

“People have many reasons to volunteer – it’s not just the opportunity itself, they want to know they are giving something back and growing themselves too.

“The boys have made a really positive contribution to the Renfrewshire community and we would love to continue to work with them on any of the many other volunteering opportunities we have available.”

One of Renfrewshire’s Syrian refugees has thanked the people of the area for welcoming them to their new life in Scotland.

Mohamad Andoura arrived in Paisley last November along with his wife and four children – and says his family love their new home…even though they had to get used to the Scottish weather.

Speaking through an interpreter, he said: “When I was back in Syria I always wanted to travel to the UK and now it is my home. Scotland is a great country and the people are amazing.

“I want to thank the people for receiving us – it was a great way we were received. I want to thank Renfrewshire Council – thanks to them my kids are going to school and studying.

“The main difference here is the weather. But I like Scottish people – they are always smiling and we have not experienced any racism.

“We feel at home here but we miss our family back home in Syria. They are not secure there – but there is nothing we can do for them.

“There is just one thing we are missing – I am looking for work and hope to find a job. In Syria I was an accountant and had experience of running a coffee shop. Having a job is very important to Middle Eastern men.”

His son, Ebrahim, aged 17, is one of the boys who volunteered with the charity. He added: “Paisley is a nice area. The people in Scotland are very nice and they smile all the time.

“To be working as a volunteer is very good for me and has given me confidence.

“There were different things we did here and I learned new things, such as how to mow the lawn.

“I am learning English although in school I do not understand everything. But my teachers in school are trying to come up with different ways to teach us and they do their best.

“My favourite subjects are maths and woodwork. When I leave school I want to go to university to study mechanical engineering.”

Paisley landmarks get a woolly good Make over
Scroll to top