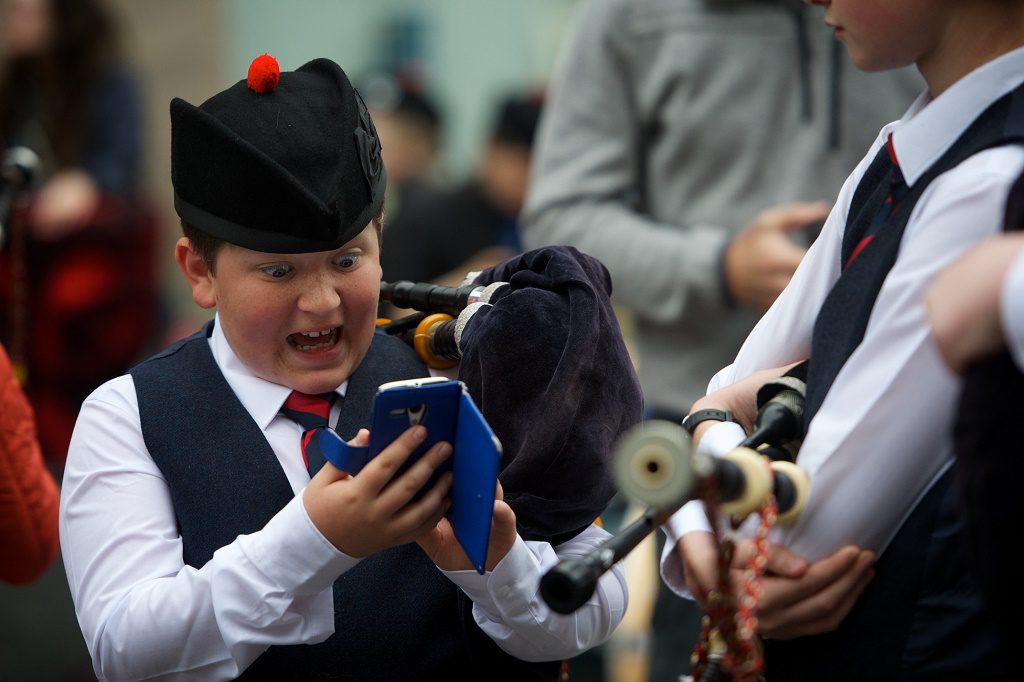 Paisley was alive with the sound of pipes and drums on Saturday (23 July) as the town hosted its seventh annual Pipe Band Championships. Paisley Piper catches a Pokomon.
Ruari Buchan a young piper withe the Johnstone Pipe Band got lucky in Paisley just before performing for the judges at the Paisley Pipe Band Championship. While the others were getting their pipes tuned Ruari had a quick check and bagged himself a Pokomon.
Pic by Kieran Chambers

Bumper crowds lined the High Street and County Square to watch pipers and drummers from across Renfrewshire, Scotland and further afield compete to be named champions. More than 20 bands put on more than 40 performances for thousands of spectators.

The successful event forms part of the exciting and expanding calendar of cultural events across Renfrewshire which form part of Paisley’s bid to be named UK City of Culture in 2021.

Each band marched from High Street, to the final tuning area at the Cenotaph, before making their way to the main arena in County Square. Here, they performed to a panel of judges from the Royal Scottish Pipe Band Association.

The standard of competition was extremely high, with the winners in each category shown here

The winning bands were presented with their trophies by chieftain of the event, Renfrewshire’s Depute Provost John Caldwell. He said: “It was an honour to be able to present the bands with their recognition for a great day’s entertainment.

“Once again, Paisley town centre provided a fantastic backdrop for the pipers, drummers and large crowds who came to experience the sounds and spectacle of the Paisley Pipe Band Championships. This is an ever popular event which attracts people from all over the UK to the town, bringing great benefits to our communities and businesses.”

During the event, people were able to submit their stories on what makes Paisley and Renfrewshire great as part of the What’s Our Story? consultation. The campaign aims to capture the everyday moments and tales that make the area one of Britain’s most exciting and diverse to live in.

People can also submit their stories online using #MyStoryMyTown or at  www.whatsourstory.co.uk.