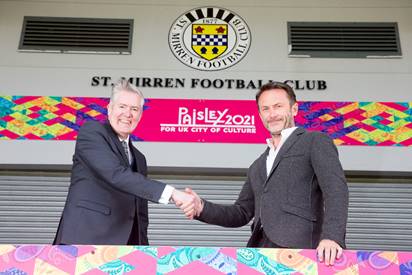 St Mirren are set for a new era after the bid to take the club towards fan ownership smashed through its 1,000-member target on Thursday evening. The St Mirren Independent Supporters Association has teamed up with ex-club director Gordon Scott on a joint offer for the majority shareholding already accepted by the selling consortium.

But the deal depended on SMISA having 1,000 fans signed up to pay a £12 per month membership by this weekend – and the trust last night burst through the milestone with days to spare after just two months of fundraising.

The plans will see Gordon become chairman and majority shareholder and the trust receive a 20% stake and a place on the board – with an exclusive option to buy Gordon’s shares within ten years and achieve majority fan ownership.

Gordon and SMISA will now lodge a £100k deposit with the selling consortium to secure exclusivity while due diligence is carried out.

The hope is the sale will be finalised and a new five-man board in place at the Paisley 2021 Stadium for the start of the new season in mid-July, bringing to an end the 18-year reign of the current board led by chairman Stewart Gilmour.

SMISA chairman George Adam said: “Today has been a momentous day in the long history of our club. It means the people who care about St Mirren most will be able to help shape its future.

“In doing so they can make sure it stays exactly where it belongs – at the heart of the Paisley and Renfrewshire community – forever.

“I would also like to pay tribute to the current board – who have put so much into the club over the past two decades and can be proud of all they have achieved.

But 1,000 members is just the start – there is no upper limit on how many members we can have, so people can still sign up any time at smisa.net and have their say in this new era for their club.

“The more members we have the better – it means less financial risk on the trust, a greater pool of talent to draw on, and the more money available to spend on club and community, while we work towards the long-term goal of majority fan ownership.”

Construction boss Gordon – who project managed the building of the Paisley 2021 Stadium during his previous stint on the board – added: “I would like to thank everybody who has signed up to make this possible and hope many more will join up in the days and weeks to come.

“There remain a few legalities to be concluded but all being well I hope to be assembling a new board for the new season and the start of a new era for St Mirren.

“That will mean the best of both worlds – I hope myself and the others will bring the expertise and ideas to take the club forward, while working with the fans to give them a greater say in the running of their club than ever before.”

Mall launches Battle of the Buskers
Scroll to top