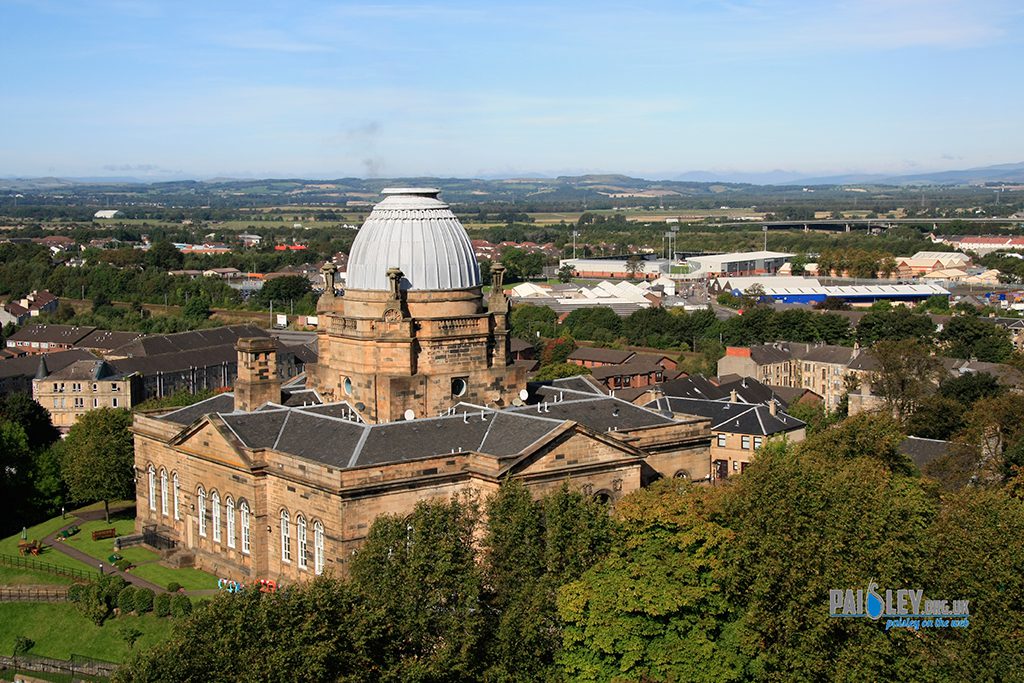 John Neilson of Nethercommon (1778 – 1839) had been a successful grocer in Paisley.  He purchased Nethercommon Estate and retired to live in its large mansion.  He died there in 1839, aged 61, and was buried at Paisley Abbey. Three months before he died, he set up a trust deed to build and endow a school. By 1852 the John Neilson Institution had been built on the site of a bowling green, to the design of Charles Wilson. To gain entry boy pupils had to have lived in Paisley for three years and their parents had to either be poor or dead.

The new school opened its doors on 5th April 1852.

In 1968, the John Neilson Institution, known locally as the “Porridge Bowl”, closed its doors for the last time and moved to new premises.  The old building was converted to flats and the former assembly hall is graced by a statue of the Greek philosopher Diogenes which was made by local sculptor Sandy Stoddart. Beneath the serene surroundings of the John Neilson Institution lies a mysterious murder case involving 2 lovers.

It was known to be the site of a foul murder in 1780. William Waterston a respected house painter began to pay attentions to a Miss Stewart.  Unfortunately, she was already betrothed to Archibald Paisley, a wealthy merchant. One evening Paisley’s drinking friends James Orr and Walter Corse confronted William and persuaded him to take a walk to the bowling green. A fight broke out when William refused to stop seeing Miss Stewart. Corse hit him on the head with a rock, a blow which fractured his skull and from which he died.

When Orr and Corse heard that William had died they fled the area, however, they were later summoned to court on the charge of murder.  There was an outcry from the “working classes” within the town as both men were acquitted of murder. Ironically Orr later became the sheriff of the county and was esteemed as an ‘upright judge’.

In 1780 the year that Waterston was murdered, a stone was carved with the initials ‘WW’, and placed on the edge of the bowling green to mark the spot where William Waterston was attacked.  When the John Neilson Institution was built in 1852 the bowling green was removed but the stone was rebuilt into the new school wall.  The wall forms part of the approach to ‘the cage’.  The stone can still be seen to this date. Next time you walk past the “cage” look out for William Waterston’s stone and remember the story of romance, scandal, murder and injustice.