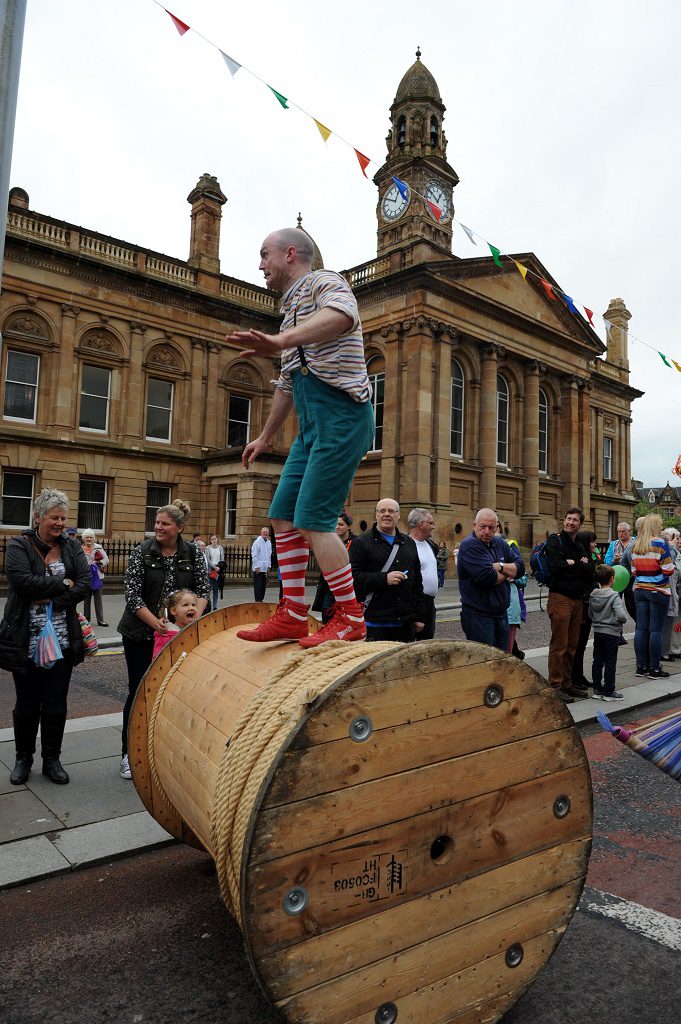 Paisley is getting ready for one of the oldest workers’ festivals in the world – Sma’ Shot Day – with a bigger and better programme for the town. The festival began in 1856 after the Paisley weavers’ won their dispute with the manufacturers to be paid for the Sma’ Shot – a hidden cotton thread that held the Paisley Pattern shawls together.

On Saturday 2 July, the festival kicks-off with the annual parade through the town at 12pm – from Brodie Park to Abbey Close.

An afternoon-long party then starts in Abbey Close from 1pm with live music and entertainment on the main stage – with Pulse FM and performances by PACE youth theatre and Renfrewshire Witch Hunt 1697.

The event also features kids’ entertainment, craft market and the popular tea dance, ending with the traditional Burning of the Cork at 5pm.

In the evening, the return of the popular Sma’ Shot Poetry Slam starts at 7pm in Paisley Town Hall and the first of two radical plays – From the Calton to Catalonia – begins at 7.30pm in Paisley Arts Centre.

Tickets for both performances are on sale at  boxoffice.renfrewshire.gov.uk.

Renfrewshire’s Provost Anne Hall, who will lead the parade alongside the Charleston Drum, said: “Sma’ Shot Day is a popular event for the town and it’s great to see the event grow this year – with two fantastic plays celebrating Paisley’s radical past.

“The Paisley weavers’ struggle with the manufacturers over the Sma’ Shot is the story behind Silver Threads and it’s great to see this new comedy bring an important part of the town’s heritage to life. It features alongside radical play From the Calton to Catalonia, which looks at Scotland’s part in the Spanish Civil War.

“The Sma’ Shot parade is always a brilliant event for the town and this year will see moths and caterpillars process through the streets – linking back to the origins of thread and Paisley’s textile industry.

“The event is always a great afternoon and we expect thousands of people to come into Paisley for the festival. It’s a great way to showcase Paisley’s cultural offering and a huge boost as momentum builds on our bid for UK City of Culture 2021.”

Roads on the parade route will be close to all traffic between 11.30am and 1.30pm. McGills and First Glasgow bus services affected will be diverted during the parade, with normal service recommencing thereafter.

Sma’ Shot Day is part of an exciting calendar of events for Renfrewshire that supports Paisley’s bid to be UK City of Culture 2021.

The bid is taking place as part of a wider push to transform the town’s future using its unique cultural and heritage offering as the home of the Paisley Pattern and the one-time centre of the global textile industry.