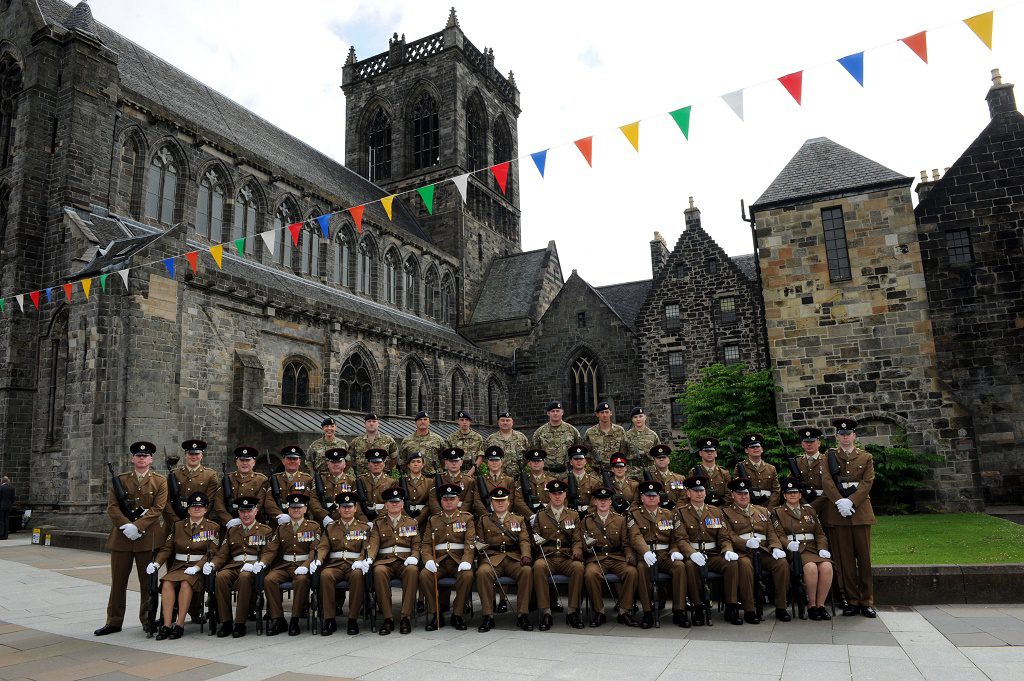 Residents from Renfrewshire and Inverclyde gathered to celebrate Armed Forces Day with a special service at Paisley Abbey. Before the service, and to mark the 100th anniversary of the Battle of the Somme, wreaths were laid at the Cenotaph in Paisley by Provost Hall, the Royal British Legion Scotland (RBLS)- Paisley Comrades Branch, Argyll Association and 102 Field Company Royal Engineers.

The Inverclyde Schools Wind Ensemble performed inside Paisley Abbey as members of the congregation arrived for the service- which was led by Reverend Alan Birss, Minister of Paisley Abbey, and Father Stephen Baillie, St Charles’ Church.

The Lord-Lieutenant of Renfrewshire, Guy Clark, completed the first reading of the service, and was followed by Inverclyde’s Depute Provost, David Wilson.

Renfrewshire’s Provost Anne Hall led a prayer of intercession which preceded a moving performance by the Gryffe High School Choir.

Provost Hall said: “Our Armed Forces are vitally important and it is imperative that we take this opportunity to recognise the work they do.

“I am proud to be a part of this service which gives both the Renfrewshire and Inverclyde communities the chance to show their appreciation for the sacrifices the Armed Forces make.”

The service took place in advance of the national Armed Forces Day which takes place on Saturday 25 June- in order to allow the attendance of serving men and women in both authority areas.

In addition to the service, and in recognition of their 300th anniversary, 102 Field Company Royal Engineers paraded through Paisley town centre.

The RBLS- Paisley Comrades branch also marched from their base in Renfrew Road to the Abbey.

President of the Paisley Comrades branch, George Gaughan had raised the Armed Forces Day flag at a ceremony on Friday outside Renfrewshire House.

The flag will fly for nine days in recognition of the sacrifices made by servicemen and women to protect the country.

MyAccount proving a hit with Renfrewshire residents
Scroll to top