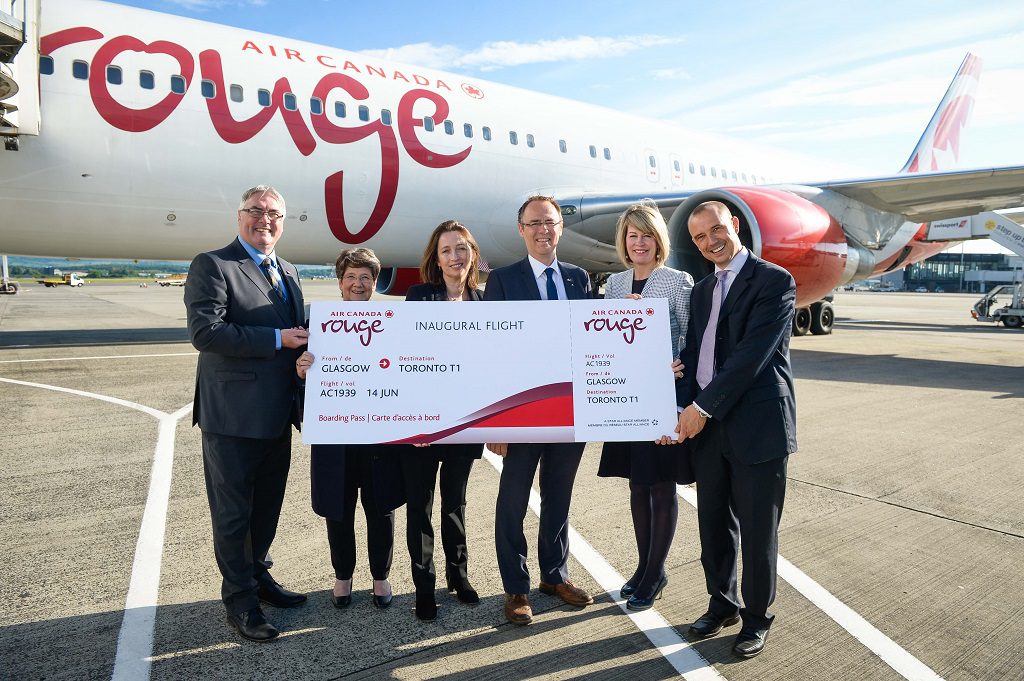 “Air Canada has a long history in Scotland, with our first flight arriving in Prestwick in 1943. We are proud to serve the Scottish market and excited to launch this new service from Glasgow to Toronto today,”
said Margaret Skinner, Air Canada’s Director Sales Europe. “This new route will offer our customers in the west of Scotland increased travel options, providing not only non-stop access to Toronto, but also convenient connections through our Air Canada Toronto hub to our extensive network in Canada, the USA, Latin America & the Caribbean.”

The Minister for International Development and Europe, Dr Alasdair Allan, said: “The launch of this service between Glasgow and Toronto is fantastic news and I’m delighted to see it get off the ground today. It will benefit both business travellers and tourists, bringing improved access to international markets making Scotland even more attractive as a tourist destination. I hope this service will help build on the historic and cultural bonds between our two countries. I wish Glasgow Airport and Air Canada Rouge every success with this route.”

Amanda McMillan, CEO of AGS Airports and managing director of Glasgow Airport, said: “Canada has always been a hugely important market for Scotland and the introduction of this new service will provide passengers with access to Air Canada’s extensive route network throughout the Americas. The service will also enhance our links with what is the world’s largest group of airlines, Star Alliance, and we’re delighted to welcome on board such a major player in global aviation during what is our 50th anniversary year.”

Councillor Frank McAveety, Leader of Glasgow City Council and Chair of Glasgow City Marketing Bureau, said: “The arrival of Air Canada Rouge’s inaugural Toronto flight and the introduction of three services every week across the peak summer season is a significant boost for Glasgow, one which will further strengthen cultural and business links between our two great cities in the coming weeks.

“More than 40,000 Canadian tourists already visit Glasgow every year, boosting our economy by some £14 million. Canada is our fifth largest international market and there will undoubtedly be strong demand for this service, which has the potential to deliver considerable inbound leisure and business tourism. This is another great example of Glasgow’s efforts to continually grow its air links and connect the city to the global marketplace.”

Malcolm Roughead, Chief Executive of VisitScotland, said: “We are delighted to welcome this fantastic new air service from Air Canada Rouge connecting Toronto with Glasgow, further strengthening our international connectivity and putting Scotland on the world stage. VisitScotland is playing a major role in bringing new air routes to Scotland through innovative marketing partnerships, and we will work with Air Canada Rouge to drive tourism growth for the Scottish economy. “Canada is a major inbound tourism market for Scotland driven by strong ancestral links – our ties stretch back to the founding of the Canadian confederation which celebrates its 150th anniversary next year – while the immensely popular television series, Outlander, has ignited a further desire in viewers across the Atlantic to explore our history and landscapes. We hope this new service will encourage even more Canadians to make the journey to discover the Spirit of Scotland for themselves.”

Air Canada Rouge also operates an Edinburgh-Toronto service with up to four flights per week throughout the summer period.

The route will be operated by 282-seat wide-body Boeing 767-300ER aircraft. The aircraft interior features a two-cabin configuration with 24 Premium Rouge seats offering both additional legroom and enhanced service in the front cabin, and 258 Economy seats – including 35 Preferred seats with additional legroom – in the rear cabin.

For more information and to book flights visit  www.aircanada.com or call Reservations on 0871 220 1111.