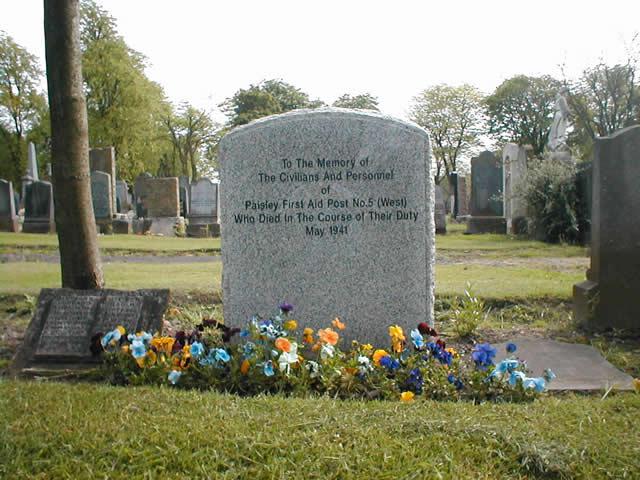 Paisley’s worst wartime disaster will be commemorated with a special service of remembrance as it reaches its 75th anniversary. Nearly 100 first aid volunteers died when a German parachute bomb hit First Aid Post #5 in Woodside, Paisley, at 2am on 6 May 1941.

It was a last minute gust of wind that blew the bomb away from residential closes on King Street towards the first aid post.

Jenny Enterkin (aged 102), the oldest survivor of the blast that killed 92 of her fellow volunteers working that night, will attend a special memorial service at Woodside Cemetery on Sunday 8 May, 2pm – lead by Reverend George Prentice.

Joining Jenny at the service is James Ferguson, whose father Peter went to help emergency services on the scene after the bomb hit. Peter was so shocked by the events of that day he took a piece of the parachute cord as a memento so he would never forget.

Three wreaths will be laid – one by Renfrewshire’s Provost Anne Hall on behalf of the people of Renfrewshire. Mrs Enterkin and Dr Stella Gibson (whose father was killed at the post) will also lay wreaths.

The names of those lost in the disaster will be read out by Council Leader Mark Macmillan, members of the Board of Woodside Cemetery and community representatives during the service.

After the service, people are invited to share memories over tea and sandwiches at Martyr’s Sandyford Church on King Street (from 2.45pm)

A special WWII 1940’s theme tea dance to celebrate the lives of those lost will also take place at the church – alongside speeches by local historians and live music of the era.

Provost Anne Hall said: “The Woodside bombings were Paisley’s worst disaster and it is important that we always remember the sacrifice these people made for the freedom we all enjoy today. Their lives, hopes and dreams were taken from them in a single moment – and we should never forget that.

“Anniversaries are always poignant moments of reflection for the community. In honouring the lives of all those who perished that day we keep their memory alive in our hearts.

“After the service, people are invited to join to share their memories in Martyrs’ Sandyford Church and I hope to see many come along to this part of the memorial event between 2.45pm and 5pm.”

The Woodside First Aid Post memorial service has been organised by the Renfrewshire Family History Society, the Board of Woodside Cemetery and Renfrewshire Council.