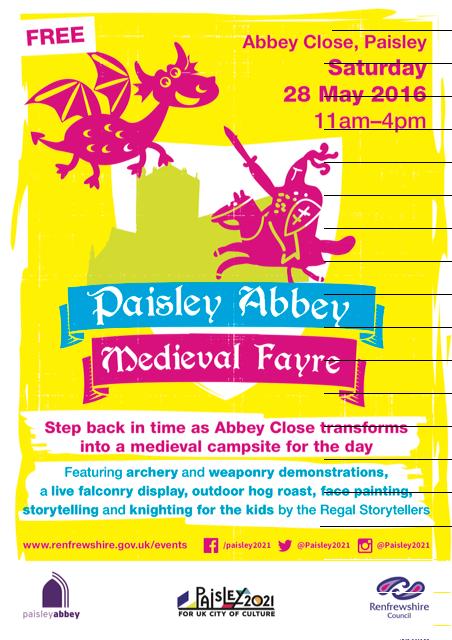 Paisley is gearing up to experience the sights and sounds of medieval life as Abbey Close turns back time to the year 1316 for the day. As the birthplace of the first Stewart monarch – King Robert II of Scotland – Paisley Abbey is celebrating this 700th anniversary with a special medieval fayre on Saturday 28 May, 11am to 4pm.

The story of Majorie Bruce – Robert’s mother – and her death following a tragic horse riding accident will be told alongside wandering minstrels, puppets and storytelling knights.

On Abbey Close, a medieval campsite and kitchen will be set up for the day – including falconry, an outdoor hog roast and medieval arts and crafts.

Custom-made weapons will be available to handle, with demonstrations throughout the day and a display on the evolution of the weapons.

Kids and adults alike can also dress up as knights by donning helmets and chain mail with the stocks a great picture opportunity.

On top of that, there will be face painting, a picnic area and medieval-style games.

Renfrewshire’s Provost Anne Hall, who will be at the event on Saturday, said: “The medieval fayre will be a feast of family fun that is rooted in the unique history of Paisley Abbey.

“This year marks 700 years since King Robert II of Scotland was born at Paisley Abbey – a day that also marks the death of his mother Marjorie Bruce.

“There will be something for everyone on Saturday – with storytelling, arts and crafts, medieval food and a fantastic atmosphere.”

The Medieval Fayre is part of an exciting calendar of events for Renfrewshire that is expanding as momentum builds for Paisley’s bid to be UK City of Culture 2021.

Paisley’s culture bid is due to be lodged with the UK Government’s Department of Culture, Media and Sport in early 2017.