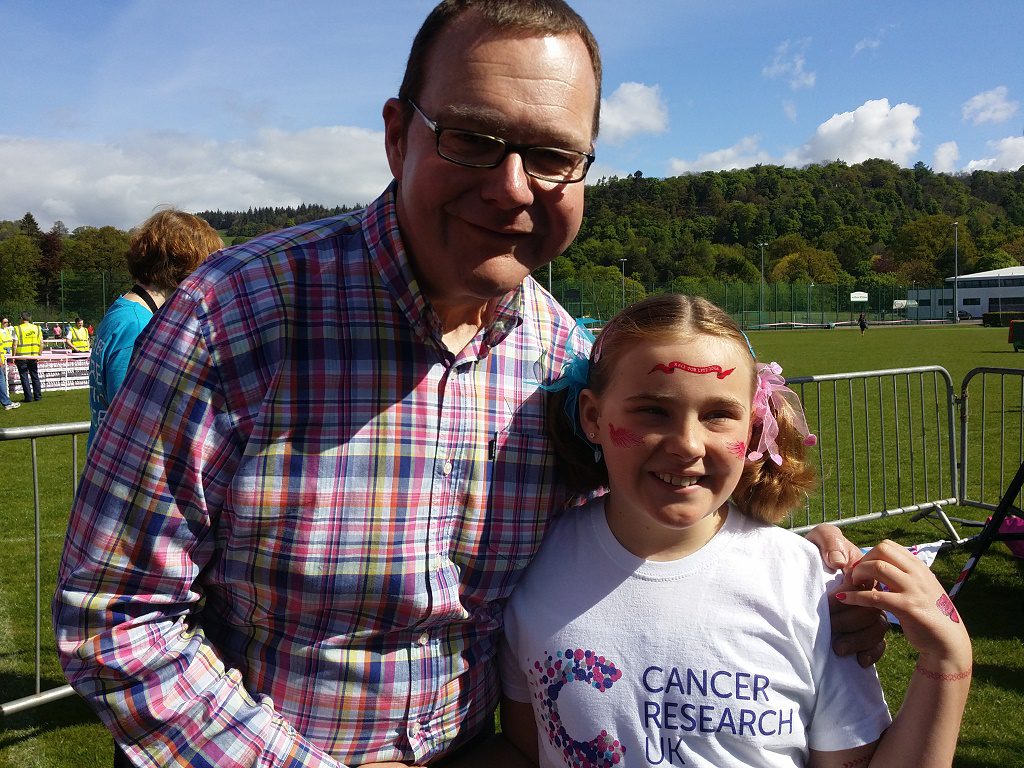 BRAVE schoolgirl Lucy Robertson kicked off Scotland’s 2016 Race for Life season today- after major surgery to cut her risk of developing the same cancer her dad is fighting. Nine-year-old Lucy who is a primary five pupil at Doune Primary was chosen as VIP to sound the airhorn and set off more than 1,100 pink ladies on the 5K course at Cancer Research UK’s Race for Life in the picturesque grounds of the University of Stirling. Lucy stood on stage shoulder to shoulder with her mum Andrea, 44, and dad Gordon, 41, united by a determination to beat cancer sooner. The family chatted with Heart Scotland breakfast presenters Adele Cunningham and Robin Galloway who rallied the crowd in blazing sunshine.

Lucy said: “It feels great to be chosen as VIP today and I’m really proud to be at Race for Life with my Dad.

When I first found out my dad was ill I was upset. I cried when I was told I had the same faulty gene as my dad and I needed the same operation he’d had. I felt really nervous the night before the surgery. After my operation I couldn’t talk at first but after five minutes I was so hungry I had two packed lunches. I remember I was given a Princess Merida dress from the film Brave and I wore it on the hospital ward. I was off school for about three weeks but got lots of get well soon cards from my class.

“I feel so much better now and only go to hospital for check ups. I love gymnastics, horse-riding and swimming. I’m proud to be at the frontline in the fight against cancer and I want to be a nurse when I grow up. I hope by then there will be even more amazing research in the laboratories so families in the future don’t have to go through this.”

Ciorstaidh Ainsworth, 13, of Wallace High school was first home in the 5K crossing the line in an impressive time of 18 minutes and 35 seconds. More than 130 youngsters from Stirling High School also took part in Race for Life Stirling, led by PE teacher Louise Kennedy. The school aims to raise more than £1,000 for Cancer Research UK-vital cash which will fund research in to more than 200 cancers.

It’s been a tough few years for Race for Life Stirling VIP Lucy Robertson. Lucy’s dad Gordon was diagnosed with medullary thyroid cancer in January 2012. It meant a seven-hour operation at the Beatson West of Scotland Cancer Centre, Glasgow to have his thyroid removed then six weeks of radiotherapy every day. But while recovering from his own treatment, it was a hammerblow when tests revealed the cancer he was fighting was genetic and that his daughter Lucy carried the faulty gene thought to trigger it. In October 2012, at Ninewells hospital, Lucy had her thyroid removed to help prevent her from developing cancer.

Dad Gordon said: “I cannot begin to describe the agony of discovering that I had unknowingly passed this gene on to my wee princess.

“But in true Lucy style, she tackled the operation with a determined smile and is now fighting fit. Around the time I was diagnosed with cancer I went through every emotion but I don’t think it helps to think, why me? That just gets you down. I had to buck up and get on with it.I had to do that for Lucy’s sake and for my wife’s sake. There are so many people going through cancer. When I was getting radiotherapy there was an appointment every 15 minutes and 12 radiotherapy rooms.The volume of people going through cancer is just staggering but we’re lucky in Scotland to have some of the best care in the world. I’ve got to know the medical staff well over the years and I owe a lot to those extraordinary doctors and scientists.”

Gordon who is chief driving consultant at the Porsche Experience Centre at Silverstone endured a second operation in 2013 where glands in his neck were removed. Now he visits the Beatson once a month to receive a chemotherapy drug called Vandetnib and has fundraised tirelessly to raise more funds for life-saving research. He has raised more than £23,500 so far with events including an amazing 1,400 mile, five-day drive in a classic 1965 Porsche 911 from Stirlingshire to Goodwood in Sussex which he completed with Lucy by his side.

Gordon said: “Thankfully because of everything that’s happened to me, doctors know how to look after Lucy.

“Lucy is my priority. Keeping Lucy involved and interested is great as Lucy has a lifetime of this. I’m exceptionally proud of Lucy and how she’s coped with everything. She does so much for charity. She is so resilient.”

Cancer Research UK’s Race for Life, in partnership with Tesco, is an inspiring women-only series of 5k, 10k, Pretty Muddy and marathonevents which raises millions of pounds every year to help fund life-saving research. Last year, women at Race for Life in Stirling raised £73,315, part of a fantastic £2.3 million raised across Scotland at Race for Life events. Organisers are now urging women to return their sponsorship money to help pioneering research. Every hour, around three people are diagnosed with cancer in Scotland* and the number of people being diagnosed with cancer has now reached 30,200 cases each year.**

Race for Life event manager for Stirling said: “The support people across Stirlingshire have shown is absolutely tremendous and we are thrilled so many women took part in Race for Life.

“We want to say a heart-felt thanks to everyone who took part or supported our participants, as well as the wonderful volunteers who helped to make it happen. Sadly, most of us know someone whose life has been touched by cancer. But thanks to the huge progress that has been made in the fight against the disease, more people in Scotland are surviving cancer than ever before.

“Our aim is that one day everyone will beat cancer. The more research we can fund, the sooner that day will come. Now the big day is over, we are asking our supporters to take one last step-by returning the money they have raised so that we can go on funding much needed research.”

Money raised through Race for Life allows Cancer Research UK’s doctors, nurses and scientists to advance research which is helping to save the lives of men, women and children across Scotland.