Lochwinnoch musician and TikTok star, archie, 18, sets out to follow in the footsteps of musicians like Paulo Nutini and Oasis as he headlines the main stage at King Tut’s in Glasgow on Sunday 7th August. The gig will also launch his debut solo single, “Everything She Does Is Beautiful” which will be released on Friday 5th August on all major streaming platforms. 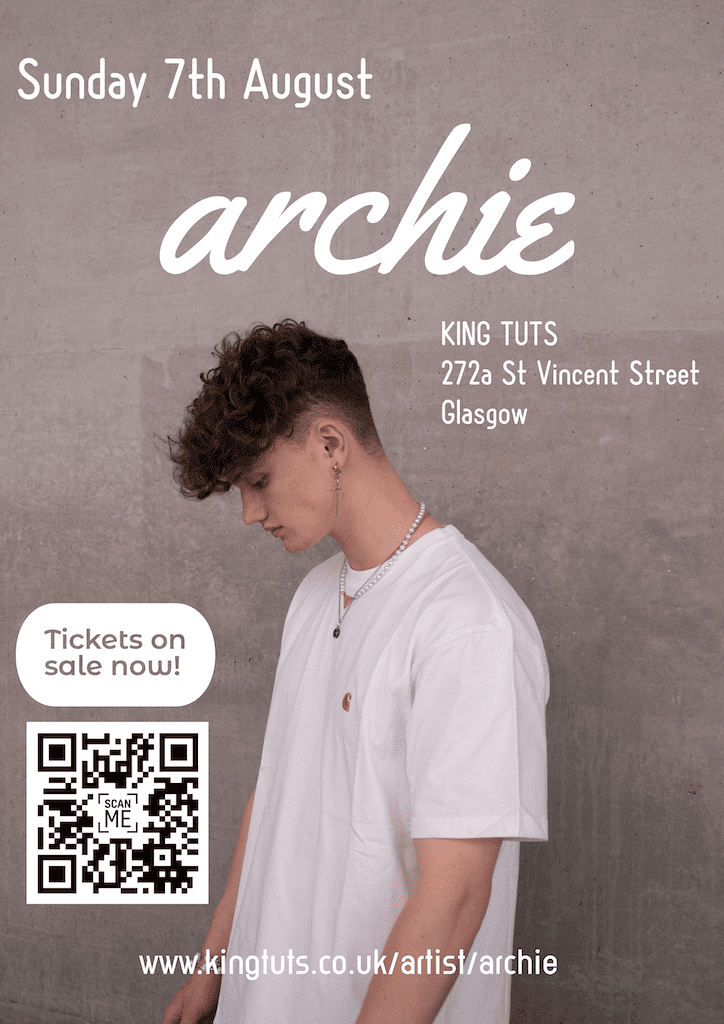 Super-talented archie, who sings and plays 11 different instruments, has already performed at iconic venues such as the Barrowlands and the Glasgow Green main stage for the 2018 European Championships. His first major hit, “Nicotine” – which he wrote and sang for Drum and Bass DJ/Producer Goddard – made the top 10 on the iTunes dance charts with nearly 5 million streams – winning archie the honour of closing out London’s Tobacco Docks music festival to a sell-out crowd of over 2,000 people. His new song is the first release from a forthcoming EP showcasing two years of solo writing and recording with top Scottish and London producers, with much of his inspiration coming from walks in the Renfrewshire countryside.

Ahead of his gig, archie will be supporting the Summer Jam 2022 fundraiser for the Teenage Cancer Trust at the Three Churches in Lochwinnoch on Sunday 31st July and he’s also performing at the Cycle Arts Festival at Castle Semple Visitor Centre at 3:45pm on Thursday 4th August.

“I’ve always had amazing support from my local community, helping me grow in confidence and improve, and it’s a real privilege to give something back by supporting local charities such as the Teenage Cancer Trust and St Vincent’s Hospice.

“My debut single had its very first airing in the cancer ward in Paisley’s Royal Alexandra Hospital when I sent it to a friend who was having treatment there. She said it made her cry – hopefully because she loved it!”

“I’ve been writing and recording for over two years and I’m looking forward to finally starting to share my music with a wider audience.  It’s always great to see local faces in the crowd at a gig and I hope to see lots of friends at my King Tut’s debut.”

Tickets for the King Tut’s gig are available at  www.kingtuts.co.uk/artist/archie.

Glasgow News? Daily Updates part of our network
Can Morgan make a name for himself in the MLS?

Engagement period set to close on regeneration plans for Causeyside Street in...
Scroll to top
Go to mobile version