HEADS will certainly be turning when shoppers see Darth Vader and some of his cohorts strolling around the Braehead Centre tomorrow. (Wednesday, May 4) 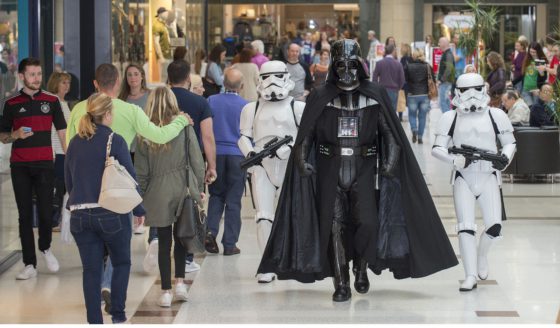 Looks like Darth and a couple of Stormtroopers are on a recce at Braehead shopping centre before their fundraising efforts for the Glasgow Children’s Hospital Charity.

Although he’s from the Dark Side, Darth – escorted by a Stormtrooper along with a Biker Scout and TIE Pilot – will be doing good deeds by collecting donations for the Glasgow Children’s Hospital Charity.

Tomorrow/today is Star Wars Day (May the fourth be with you) and lots of fans are expected to turn up at the Braehead Centre to get a selfie with the Star Wars characters in return for a donation to the charity.

Darth and Co. – who are from the Imperial Scottish Garrison 501st Legion – will be in the upper mall, near the HMV store between 3pm and 6pm, on Wednesday, May 4.

Braehead’s community development manager, Lydia Brown said: “This is a fabulous opportunity for Star Wars fans of all ages to meet and have their photo taken with such legendary characters from a galaxy far, far away.

“As well as being lots of fun, it will be helping a very good cause as the Glasgow Children’s Hospital Charity raises money to make sure every baby, child and young person treated at Scotland’s largest children’s hospital receives the extra special care they deserve.”

Jet2.com and Jet2holidays take off to Kos for the first time from Glasgow A...
Scroll to top