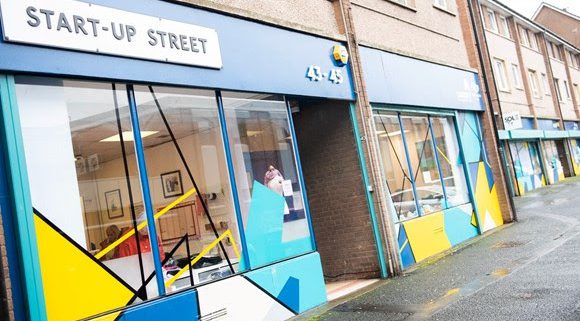 An innovative enterprise centre helping start-ups is part of a fantastic package of support for Renfrewshire businesses.

Created by Renfrewshire Council in partnership with youth enterprise charity Launch It, the centre on Paisley’s George Street lets businesses rent commercial space for up to two years, with lease costs incrementally increased until they are ready to move to an alternative commercial space in Renfrewshire.

It’s the latest council initiative to support local firms alongside everything from grants and loans to retail shopfront improvement funds, a renowned programme for creative entrepreneurs and a dedicated Business Gateway team.

For Troon-born artist Indie McCue, Renfrewshire is now his adopted home, with Indie leasing workspace at Start-Up Street as he looks to establish his community interest company Bide.

The 26-year-old previously worked with charities and organisations, carrying out roles in creative organising, assisting and community outreach.

Since going freelance two years ago, Indie has been drawn to the creative scene in Renfrewshire and earlier this year ran the community art project Scope, showcasing the work of his and 20 local artists at a pop-up gallery within a vacant retail space in Paisley town centre.

He said: “Start-Up Street has been phenomenal at connecting me with resources, directing me into business finances and funding and it’s given me the opportunity to meet with people that have become very influential and vital to the success of Bide.”

He is now running a monthly meet-up for creative-minded people in Renfrewshire to support the community ethos of local artists while dedicating his efforts to secure funding and support for Bide, a company he hopes will have a positive, long lasting influence.

Indie adds: “As a creative with a varying background in community arts and arts-organising, I think that it is vital to creating and sustaining a place of lasting culture in Paisley and wider Renfrewshire to have a space that nurtures and supports local creativity in a well-developed, well-managed and genuine way.”

Supporting start-ups and growing the local economy is a key focus of the Council, with the latest figures showing the progress being made.

Official figures from earlier this month show there are 3,200 fewer people claiming unemployment benefits than during the pandemic peak of August 2020, while focused work to provide 250 paid placements and apprenticeships has seen the number of young people claiming now lower than pre-pandemic levels.

Renfrewshire Council Leader Iain Nicolson said: “It’s pleasing to hear how Indie and many other talented business owners and entrepreneurs are benefitting from the centre at Start-Up Street in Paisley and I know our economic development teams are working hard to progress plans for further centres in Johnstone and Renfrew.

“The ongoing impact of the pandemic has been keenly felt by Renfrewshire’s business community and we are doing everything we can to assist them at this hugely difficult time. We’ve approved and awarded more than £53million in lifeline funding and at the same time have put in place a recovery plan in partnership with our business community that takes every available action which can make the biggest difference locally and speed up recovery.”