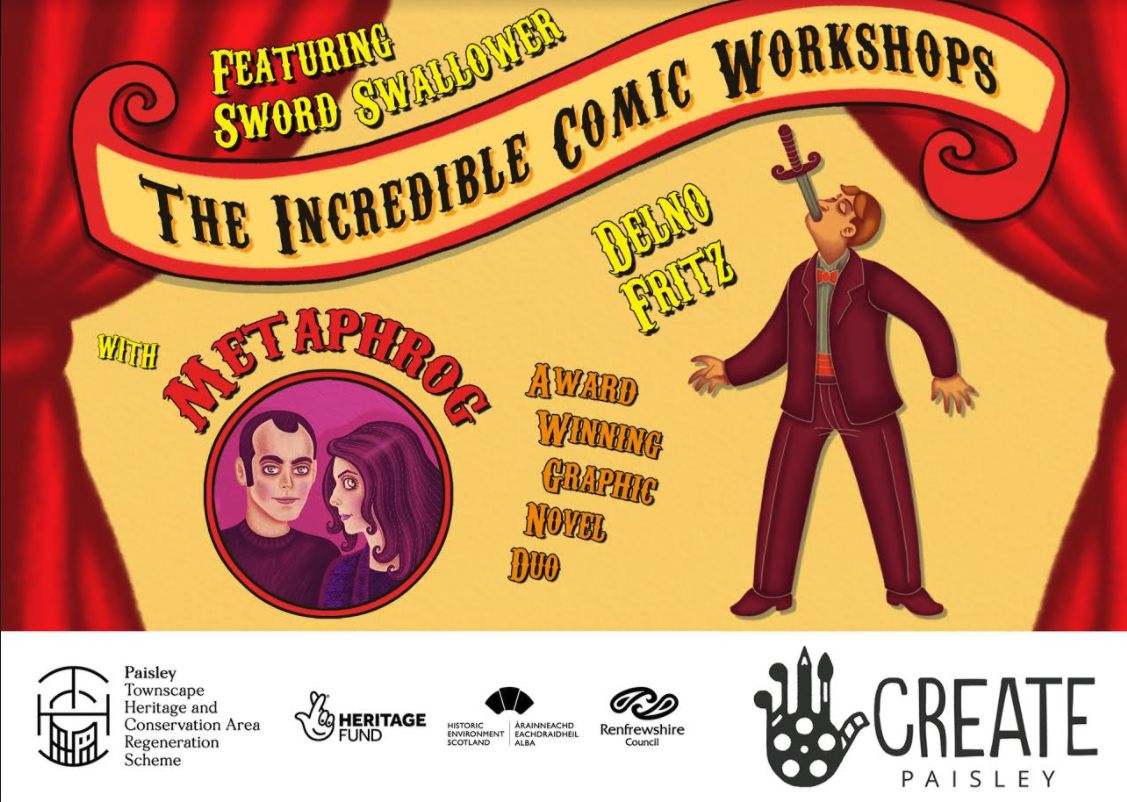 This Wednesday, and every Wednesday through to the 30th of September, Create Paisley will be running online graphic novel workshops about a sword-swallowing theatre magnate. John Chalmers and Sandra Marrs will be your hosts, a writer and artist team who work under the name Metaphrog.

Metaphrog have been nominated for, and won, several awards, and currently have an acclaimed graphic novel called Bluebeard on release. They’ve also done workshops in Paisley before. “We were at the central library for Will Eisner week and we also did several school visits” John tells me. “They went very, very well.”

As for this event, John tells me, ““We loved doing this research. There are some great sideshow posters and some colourful characters.” Delno Fritz is certainly a character. This man, almost forgotten now, was a big draw in his day and a leading international circus performer – as a sword swallower. “He was a friend to Harry Houdini” John says “and a world famous figure”. Colin Begg from Paisley Heritage dug up his story. “Colin came across Fritz and his Paisley connection in David Rowand’s book Silver Threads” John says. “It’s an interesting and very fertile area. The project was to encourage interest in the past, history and local heritage through the story of this man”.

He’s quite a man. Delno Fritz, born 1871, was one of 17 children, who ran away to join the circus. Several times. He eventually succeeded in joining with a friend. The friend went on to become a doctor. Delno became a sword swallower, and people went crazy for his act – he even performed for Queen Victoria. “His date of birth is unsure, and his IMDb entry is a bit loose too” John says. “It’s unlikely he is in the 1931 film Freaks for example, since he died in 1925”. The man had become a myth. 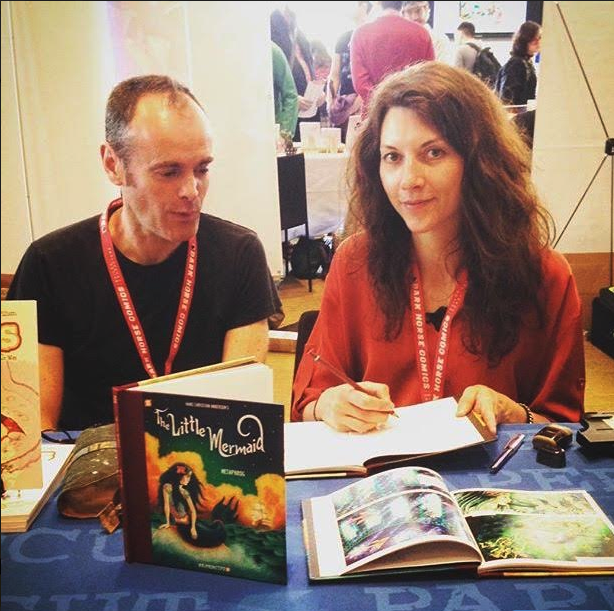 The workshops around this myth will run over 6 weeks. “We’ll talk about how comics work” John explains. “We show character design and world building all using the life of Delno as a springboard or inspiration. That life includes his involvement with the Empire Music Hall, and hence life in Paisley in the early 1900s”. You knew there had to be a Paisley connection – “So there will be six modules with a different focus – including cover design and discussion of changing attitudes” It should be an involving 6 modules.

When I ask John if it’s weird to be doing a workshop in Paisley from home, he laughs. “Everything is weird right now!” adding, “It was very hard to research especially now with archives closed and facts distant. We’re embracing the weird!” Sometimes weird times can be fun, and it’s always good to have something to occupy you. if you’re looking for that over the next six weeks, you’re welcome to tune in to Metaphrog’s Zoom workshops.

You can see more details and a trailer about this event at the following link, with the registration form included too: https://www.createpaisley.org.uk/news/delno-fritz/

Article by one of our new Journalist’s Keir Hind, lookout for more of Keir in the coming weeks.