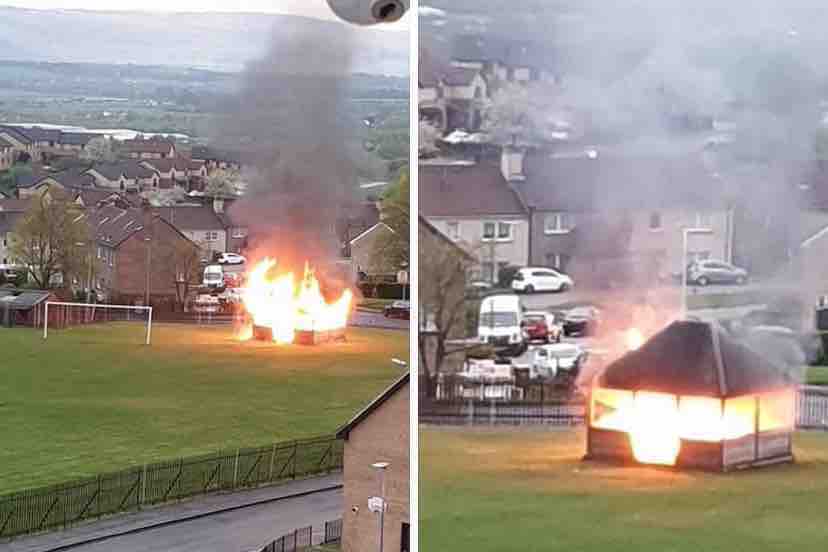 There has been outrage about the fire in the Outdoor Classroom fire which was started last night (Thursday 25th April) There has been a gofundme page setup by one of the parents, first of all here is some info from the bbc news, The photos were courtesy of Elaine Adams who witnessed the sickening act.

Vandals have torched an outdoor primary classroom in Renfrewshire, prompting outrage in the local community.

Firefighters were called to the grounds of Heriot Primary in Foxbar, Paisley at about 20:20 on Thursday.

No one was injured and the crew left the scene by 21:40. Police are treating the incident as wilful.

Local residents have since expressed frustration over the loss of the wooden gazebo online.

One parent, who has since set up a crowd funder to restore the structure, called it a “valuable resource that we cannot do without”.

While staff at the school tweeted: “We are absolutely devastated at losing such a well used outdoor classroom.

“We have been so overwhelmed with the support we’ve had from our local community. Thank you everyone!”

A spokeswoman for Police Scotland said inquiries were continuing.

Thousands turn out to enjoy feast of fun at Paisley Food and Drink Festival...
Scroll to top
Go to mobile version