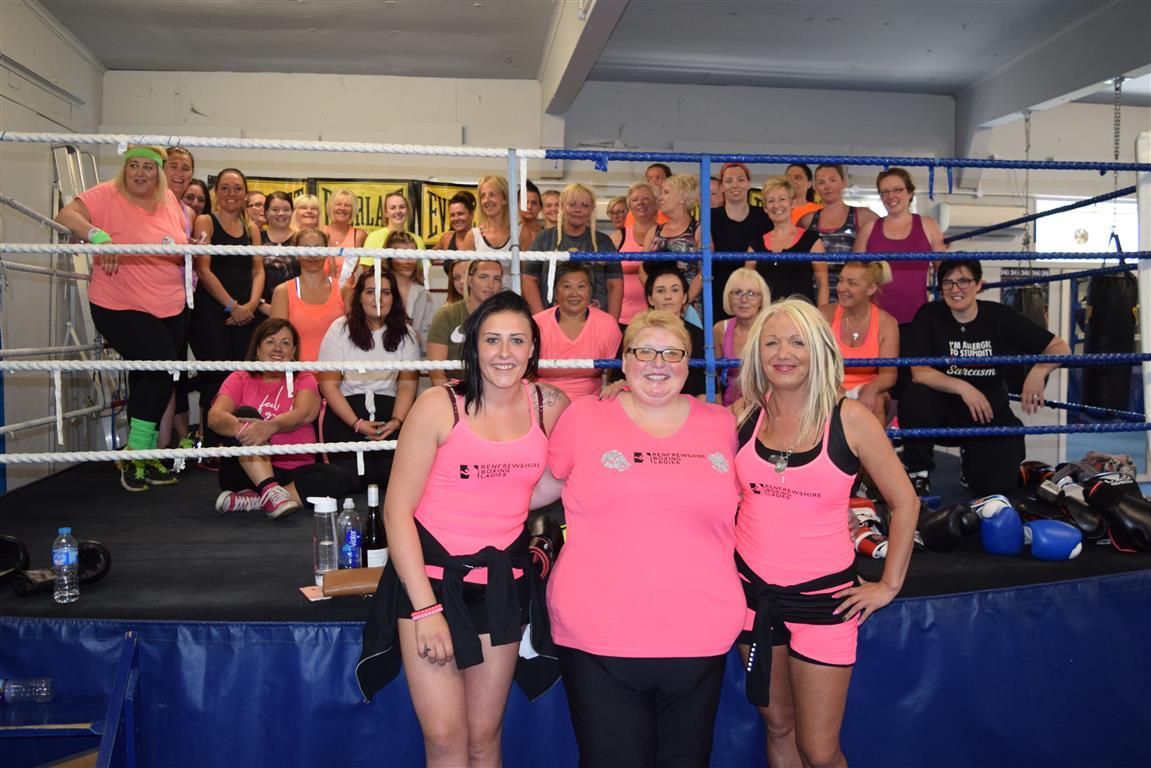 A ladies boxing class from Johnstone have raised £1,000 for a national charity during a funday to celebrate 100 years of Woman’s suffrage.

Supported by regular gym members, the class was able to raise nearly £1,000 by selling bonus ball numbers to win a bike, having a raffle and the ticket sales on the day.

The target was £1,000 and to push them over that amount, the Boxing Ladies will be taking part in the Paisley 10k Fun Run.

Paula Adleigh, said:  “We are celebrating 100 years since the suffragettes won the right to vote but for some women, like ourselves, what better way is there to celebrate that than in a boxing gym.

“As well as boxing and fitness, we teach self-defence in our women-only classes. Tia and myself were taught by Pat Sheridan who has been instrumental in the Paige’s Promise charity in Glasgow and surrounding areas.

“We would like to thank all the regular members of the gym, everyone who has donated raffles prizes and bought tickets and those who have shown their support for today. 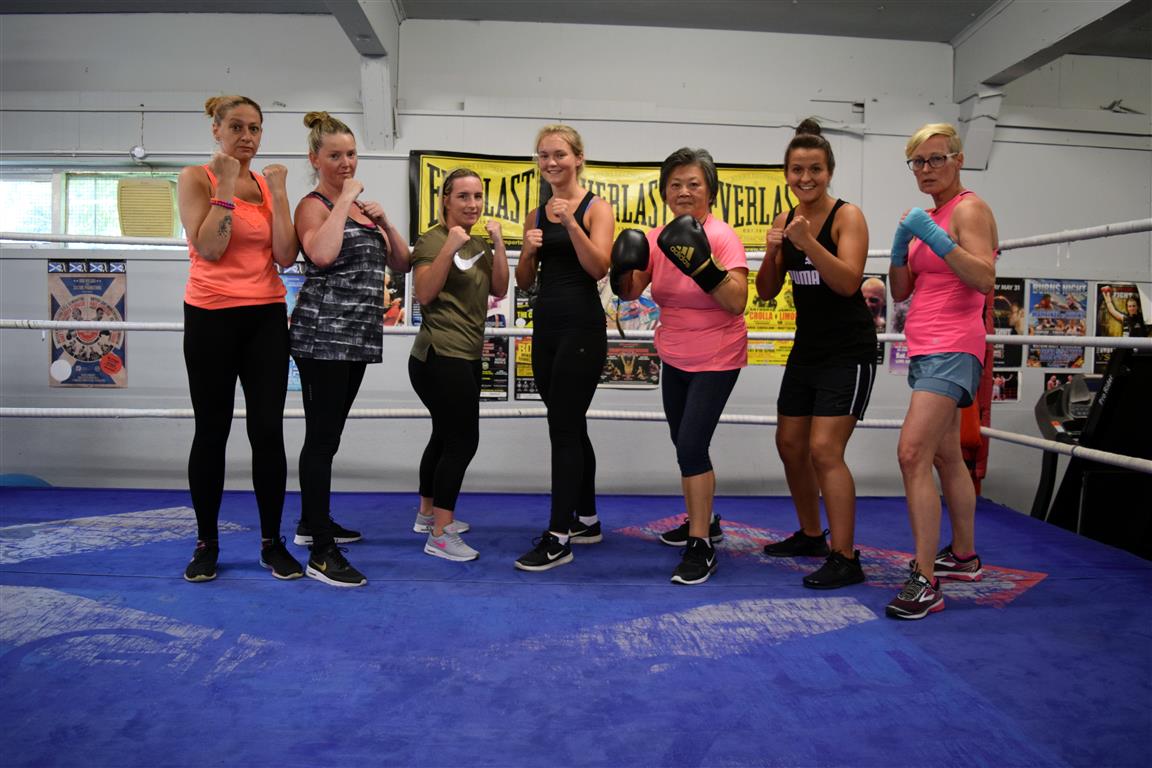 “We’d especially like to thank Colin Bellshaw, owner of Saltire Boxing Gym for allowing us to take over the gym and provided the advertising and promotion for the event. We would also like to thank Pam Bellshaw who was the heart and soul of today. Pam has been up to the wee small hours and today would not have been possible without her.” 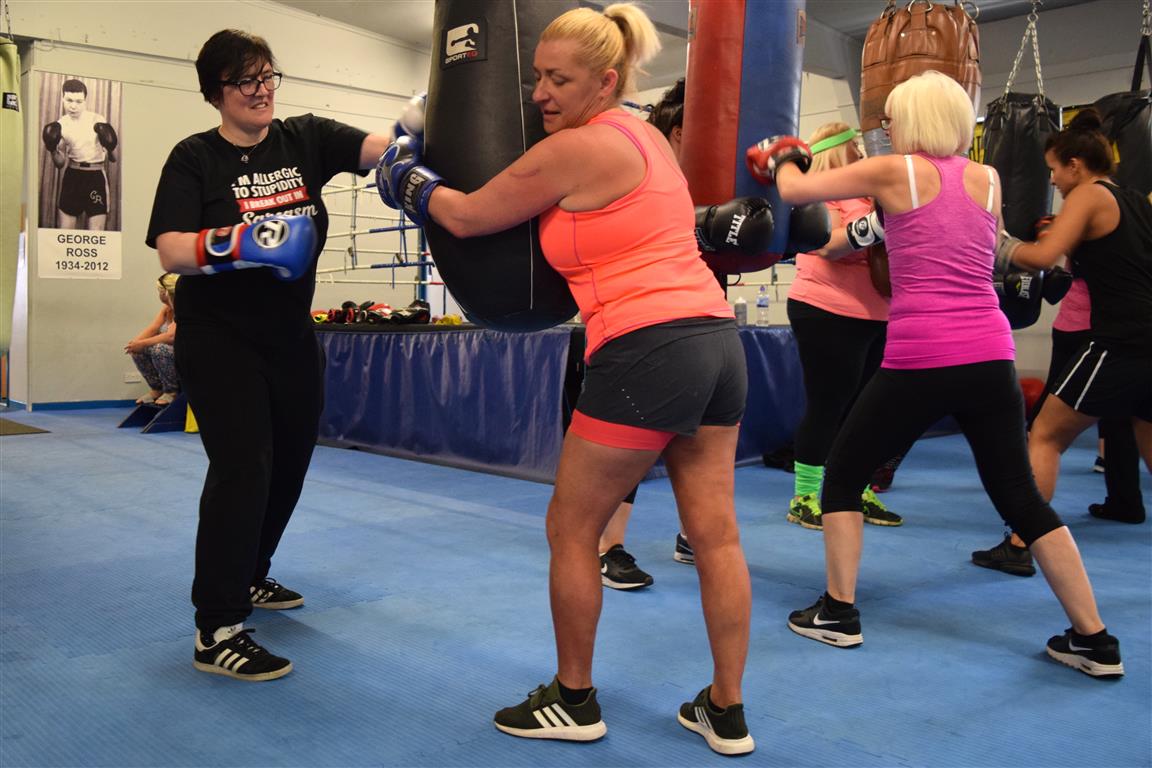 The funday was organised at Saltire Gym in Johnstone to raise money for the charity Rape Crisis Scotland where Paula works on the charity’s telephone helpline, she explained: “Rape Crisis Scotland is a feminist organisation that campaigns to raise awareness of the extent of sexual violence in Scotland and to reduce the negative impact of sexual violence on survivors and others affected by sexual violence by advocating for better service responses from the government and the public sector including the justice system.

“Some of the work that Rape Crisis Scotland has carried out in the past decade has included setting up the National Advocacy Project. A national prevention project delivered through local rape crisis centres across Scotland.

“The Rape Crisis National Helpline, where I work, supports anyone who is affected by sexual violence. This includes survivors, their family, friends and anyone who works with survivors. We work with survivors of all genders.”

Paula gave some examples of what she might face during a phone call on a typical day on the Rape Crisis Helpline, she said: “A worker like me will support someone who is dealing with the trauma of rape and other forms of sexual violence. Sexual violence can include childhood sexual abuse, sexual assault, flashing, inappropriate touching or stalking.”

Paula added: “The impact of this abuse can be experienced as flashbacks, self-harm, suicidal thoughts, depression as well as isolation and rejection from family and friends.

“I applied last year to Rape Crisis Scotland to do my counsellor training with them. I was advised when I did my first ever counselling course by my tutor that this would be the hardest training to get into and if I was successful I’d have to bring my best self to the course as the training would be hard and is the gold standard in its field.

“The advisor wasn’t lying – it is the most thorough, hardest training I have done, but it is for me the most important thing I have ever had the privilege to be part of.”

Male and female Boxfit class for all levels are held every Monday to Thursday at 9.30am & 7.30pm, Friday at 9.30am, Saturday and Sunday mornings at 10am at Saltire Boxing & Bootcamp, 26 Macdowall St, Johnstone.

Woman only Boxfit classes are held on Friday’s at 7.30pm. Children’s boxing classes are also available. To find out more information please contact the gym via or visit their Facebook Page here: https://www.facebook.com/RenfrewshireBoxing. Entry is £5 per session on a pay as you go basis. A monthly plan is also available.

Astrological Forecast for Casino Players For 2018
Scroll to top