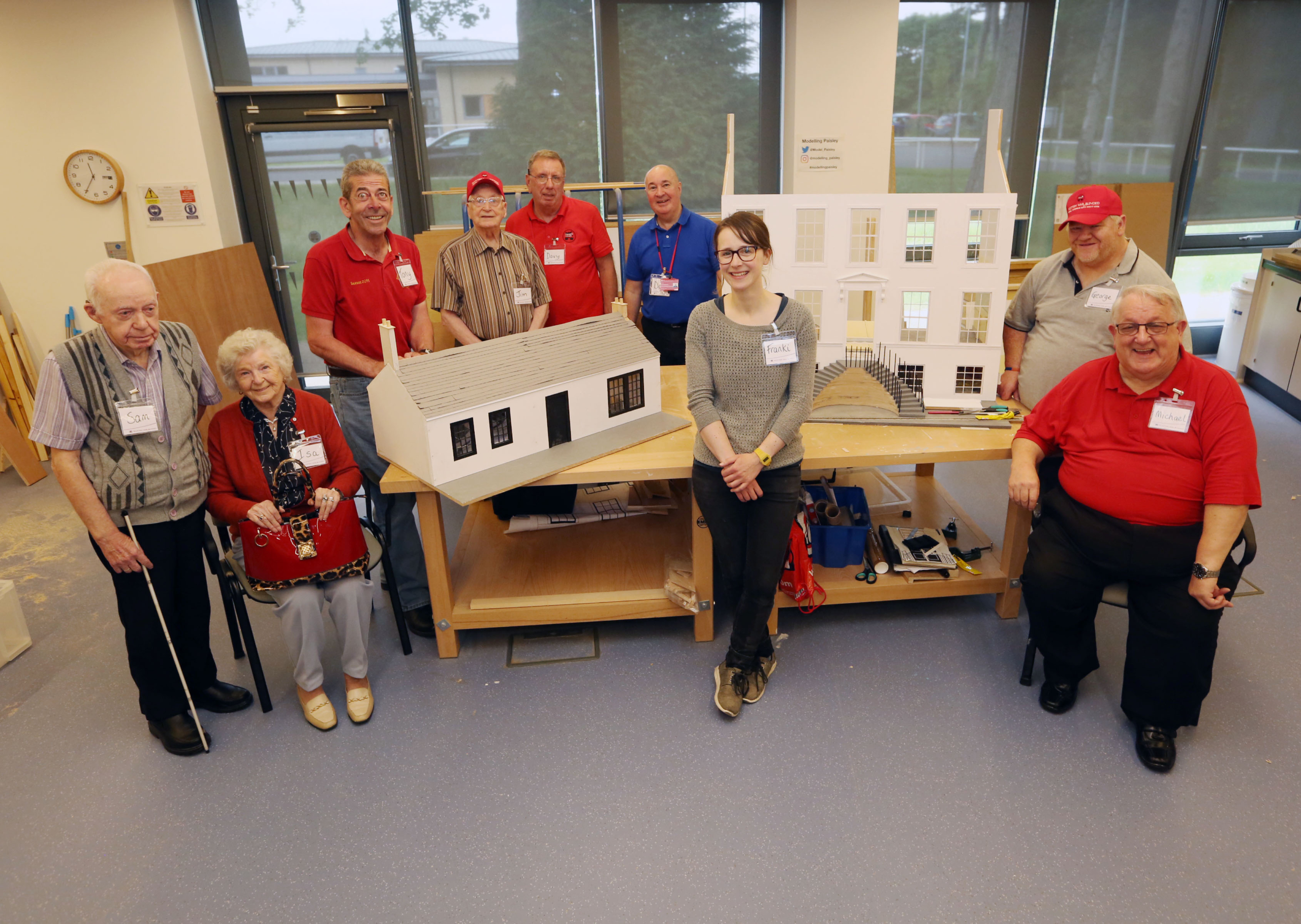 Visually impaired veterans have been busy building scale dolls houses of some of Paisley’s most recognisable buildings as part of a project aimed at engaging communities with the town’s heritage. 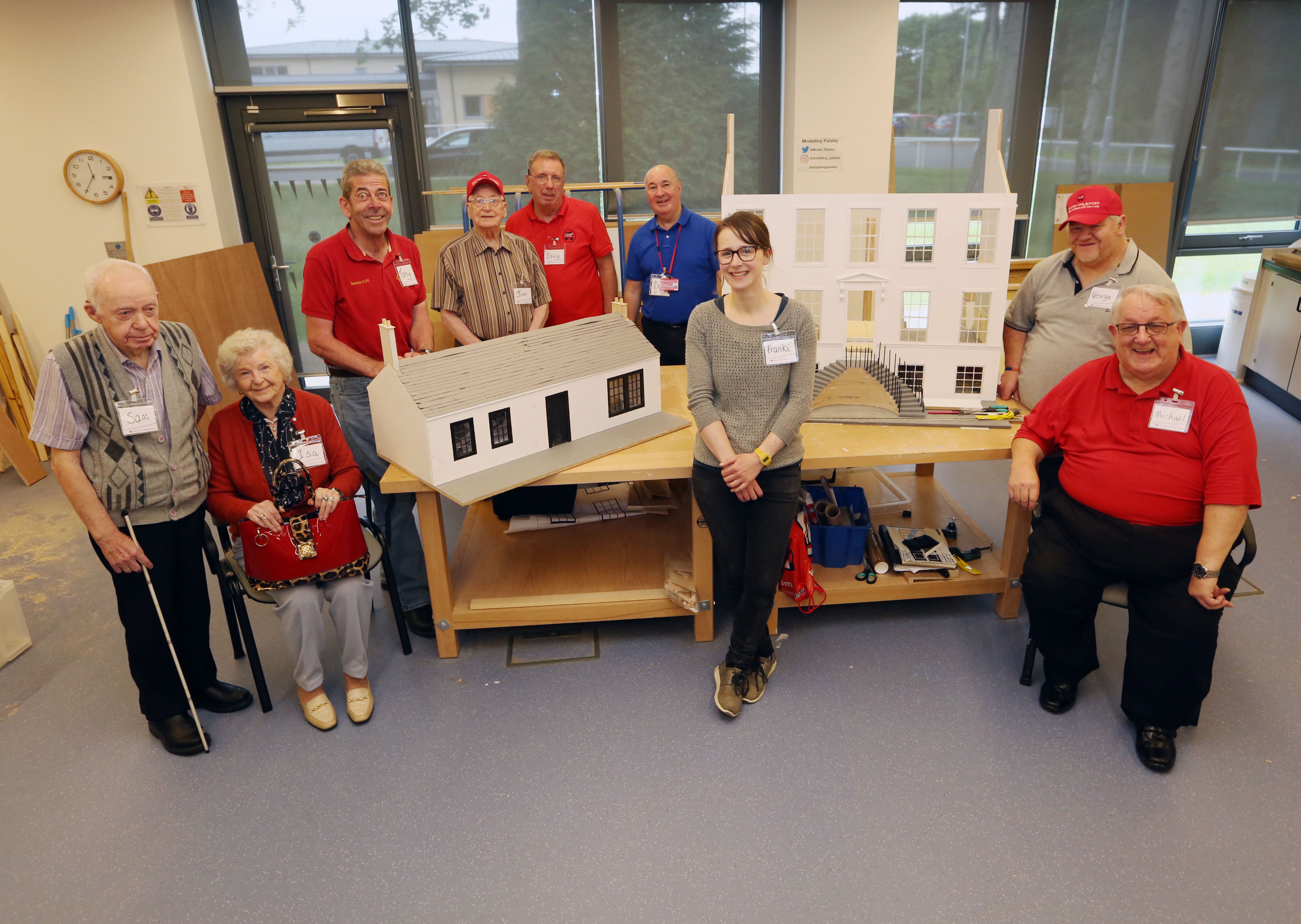 The group from The Scottish War Blinded Hawkhead Centre have been taking part in the Modelling Paisley project which is part of Renfrewshire Council’s £4.5 million Townscape Heritage Conservation Area Regeneration Scheme 2 (TH.CARS2) which is funded by the Heritage Lottery Fund, Historic Environment Scotland and Renfrewshire Council. 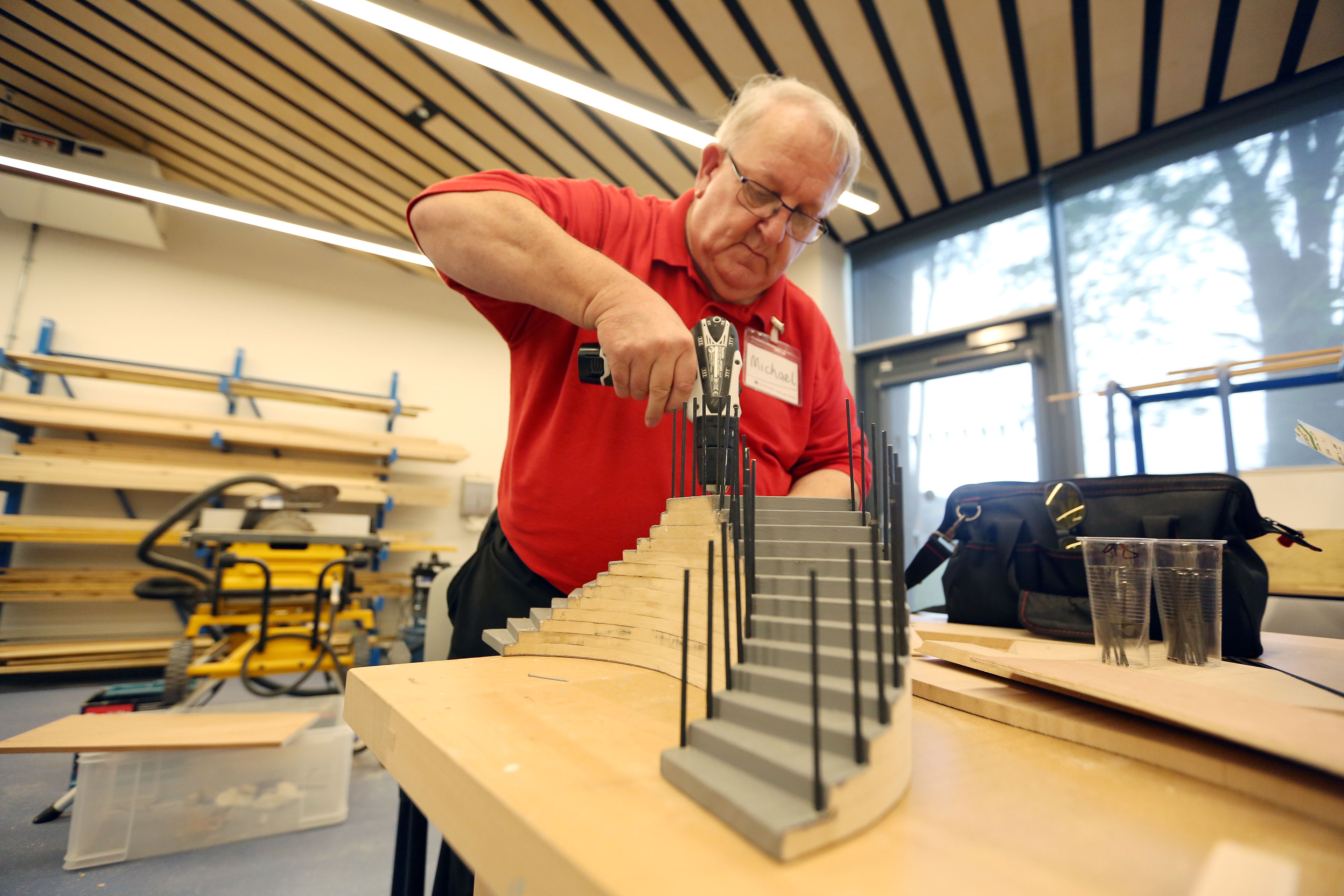 TH.CARS2 aims to make the area around the High Street a more attractive place to visit and invest as well as engage a diverse range of audiences with the heritage and culture of Paisley through learning and making. 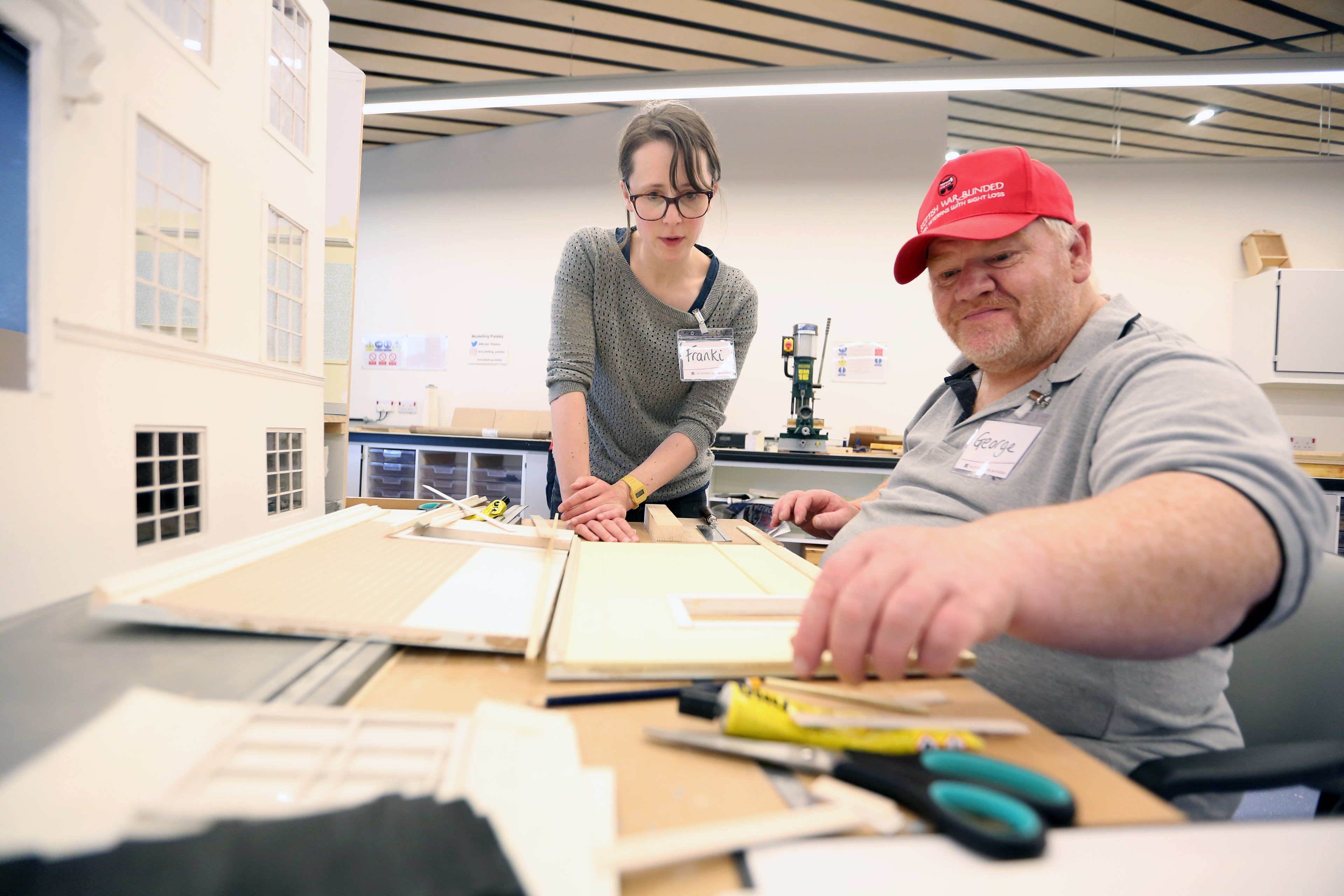 The Hawkhead Centre in Paisley is for veterans with sight loss. It is an activity hub for men and women of all ages and abilities – and is free of any costs, with local transport provided.  A range of activities and support assist with improving independence and mobility while one-to-one guidance helps veterans regain or maintain their confidence after sight loss. 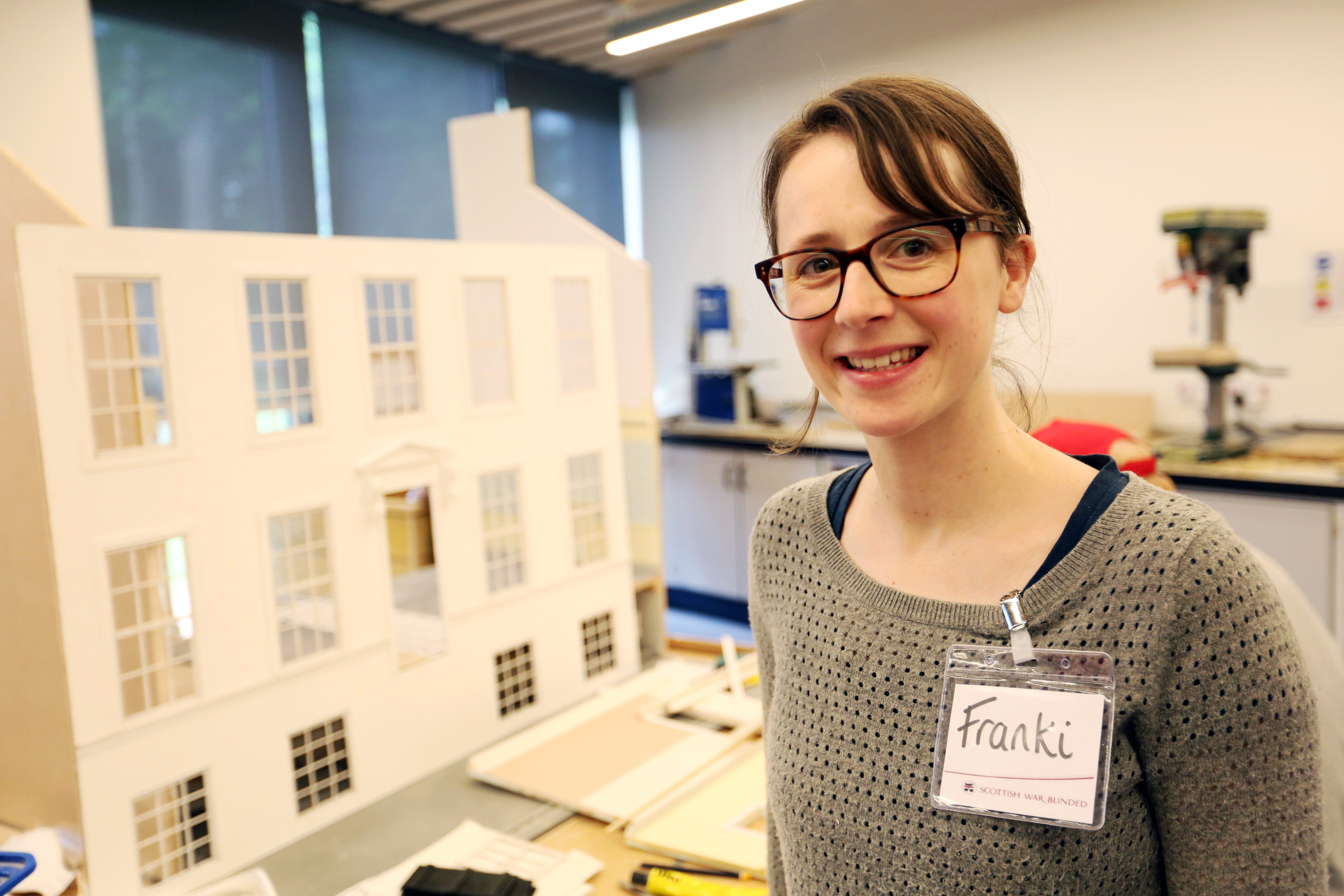 The Modelling Paisley project is being co-led by The Scottish War Blinded wood technician, David Stewart and modelmaker Franki Finch of Finch & Fouracre who are helping the group of ten veterans create four dolls houses. The group are currently working on models of the Sma’ Shot Cottages and 5 George Place and there will be another two models created before they go on display in time for Doors Open Day on 8 and 9 September.

Franki said: “It’s a brilliant project to be part of – both in terms of the historical aspect of learning more about these lovely buildings and the opportunity to work with other people teaching them new skills.

Michael Gray (67) is one of the veterans who has been involved in the project. He said: “I hadn’t done any woodwork since I was in school and I’ve spent the last 40 years working in IT – I really missed being creative. It’s great making something and seeing it develop. As well as working on the staircase for 5 George Place I’ve also bought a clock that I want to build a case for. I wouldn’t have been able to do that without the skills I’ve learned here.

“I’m hopefully going to build a workshop in my garden so I can do more woodwork projects. The key thing for me is being able to be creative and overcome problems – I’m testing myself and seeing what I can and can’t do and finding a way to work around it – I’ve really enjoyed working on this project.”

Leader of Renfrewshire Council, Councillor Iain Nicolson, said: “It’s wonderful to see our veterans learning new skills by celebrating Paisley’s stunning architecture and recreating some of our most well-known landmarks.

“I look forward to seeing the completed models when they are displayed at this year’s Doors Open Days which will give even more people the opportunity to enjoy their work.”

Sally Ross, centre manager said: “The project has been great for the members. It’s allowed them to work as a group and build friendships as well as help them develop skills they didn’t know they had. There’s a great sense of support in the group which has been lovely to see.

“We welcome enquiries from veterans, and anyone interested in referring a veteran to the centre.  With the number of people living with sight loss in Scotland expected to double by 2050 in line with population ageing, the Hawkhead Centre provides a vital service for veterans with sight loss here in Renfrewshire.”

The models will be displayed in Paisley town centre as part of Renfrewshire’s Doors Open Days on 8 and 9 September – the exact venue will be announced nearer the time.

For more information on the TH.CARS2 project please visit: www.renfrewshire.gov.uk/THCars2.

To find out more about The Scottish War Blinded Hawkhead Centre call 0800 035 6409 or visit: www.royalblind.org/scottish-war-blinded.