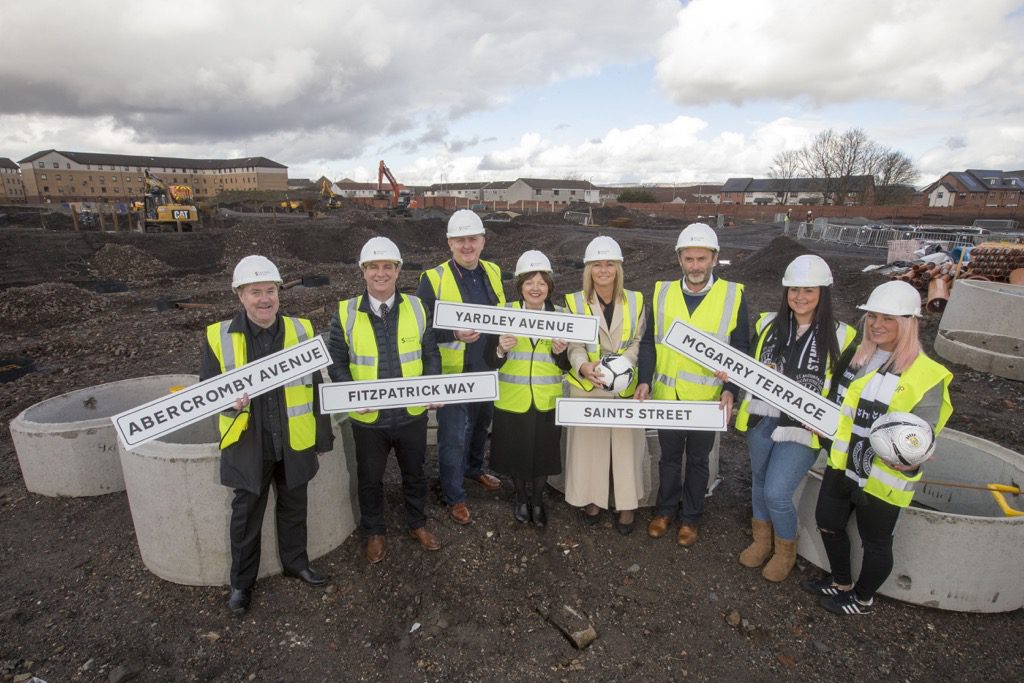 The names have been revealed of the former St Mirren stars to have a street named in their honour in new housing on the site of the club’s old Love Street ground.

Work is already underway on the £17million project being delivered by Sanctuary Scotland, in partnership with Renfrewshire Council and the Scottish Government, to transform the site into 132 new affordable homes.

St Mirren-related suggestions came flooding in with 1000 whittled down by a judging panel into a final shortlist which went to the public vote earlier this month.

More than 6,000 votes were cast during the week-long poll before the following five names emerged as the winners:

McGarry Terrace – recognising forward Steven McGarry who helped the club he supports to the 2000 First Division title and in memory of his late father Tam, a well-known St Mirren supporter.

Yardley Avenue – named after popular striker Mark Yardley whose glut of goals propelled Saints into the top flight in 2000.

These five streets add to two already named ‘North Bank’ and ‘Cairter’s Corner’ after well-known sections of the old ground they sit on the locations of.

Sanctuary Scotland has also confirmed it will name the children’s play area at the new housing development after the club’s mascot Paisley Panda.

Councillor Marie McGurk, Convener of Renfrewshire Council’s Communities, Housing and Planning Policy Board, said: “Congratulations to the past players on emerging victorious from what was an extremely strong shortlist. The competition really sparked the public imagination and we were overwhelmed by the interest it generated.

“We felt it was really important that we celebrate the rich history of the site as it is transformed into new homes to be enjoyed by families for generations to come. The development is already taking shape and will contribute towards our target to build 1000 high quality affordable homes in Renfrewshire by 2021.”

The Sanctuary development is due to be completed by September 2019. It will provide 103 houses for social rent and a further 29 houses for affordable sale through the New Supply Shared Equity scheme.

Gillian Lavety, Head of Development for Sanctuary Scotland, said: “Sanctuary is delighted Renfrewshire Council allowed St Mirren supporters to choose the names of these streets. Many who voted would have attended Love Street religiously and have glorious memories of the old ground.

“At Sanctuary we believe it’s important to recognise the history of the sites we develop. These names are fitting tributes to the local legends they immortalise and the affectionate name all fans have for St Mirren.”

St Mirren Chief Executive Tony Fitzpatrick said: “It’s an incredible honour to have a street named after me at Love Street and it means the world to know my family name will always be there. The big memory was when I was 12 years old and stood at the top of the terracing at the Love Street end, and looking down on the park I made my decision I wanted to play for St Mirren.

“That was almost 50 years ago – St Mirren has been a massive part of my life ever since and the fans have always been brilliant to me, so I want to thank everyone who voted for me. I’m pleased to see something positive happen with the Love Street site – just one of many good things happening around Paisley just now.”

Now living in Australia, Steven McGarry said: “We are all humbled and thankful for the amount of support through the votes. I suspect 99% of them were for my dad as he had such an impact with good relationships with many of the saints supporters, players and club over the years. To be named along with such legends of the club, Tony Fitzpatrick, Billy Abercromby and Mark Yardley is such an honour. Love Street will always hold a place in our hearts and this makes it even more special.

“Love Street and St Mirren were a massive part of my childhood. My dad started taking me to games ever since I was two. The biggest memory would be no surprise, being part of that special team in 1999/2000 and scoring against Raith Rovers to help clinch the Championship in such a spectacular season will live with me forever.”

Mark Yardley said: “The atmosphere generated at home matches was amazing. I always remember how passionate and loyal our supporters were, through the very good, but also some very bad times. The noise they made was appreciated by all the players and I loved playing at Love Street and it was even better scoring there many times over the years.

“For me to be one of the lucky five winners of the Saints Streets competition it is an absolute honour and I feel so privileged to be voted by the supporters. To make the top five has made me one of the proudest and happiest men in the world and how grateful I will always be to them for this accolade.”

Billy Abercromby said: “I had two dreams, one to be a professional footballer, another to win a major trophy. Being the captain was the icing on the cake and now I can walk down my own street – that’s something special.

“I loved playing at Love Street every week, supporters singing my song gave me a wee boost. Playing here was my life and I had some great moments, like scoring two goals against the then European champions Liverpool and nutmegging Ray Clemence with my penalty as I just shut my eyes and kicked it.”

Glasgow News? Daily Updates part of our network
The Best Locations in the UK for Food Lovers