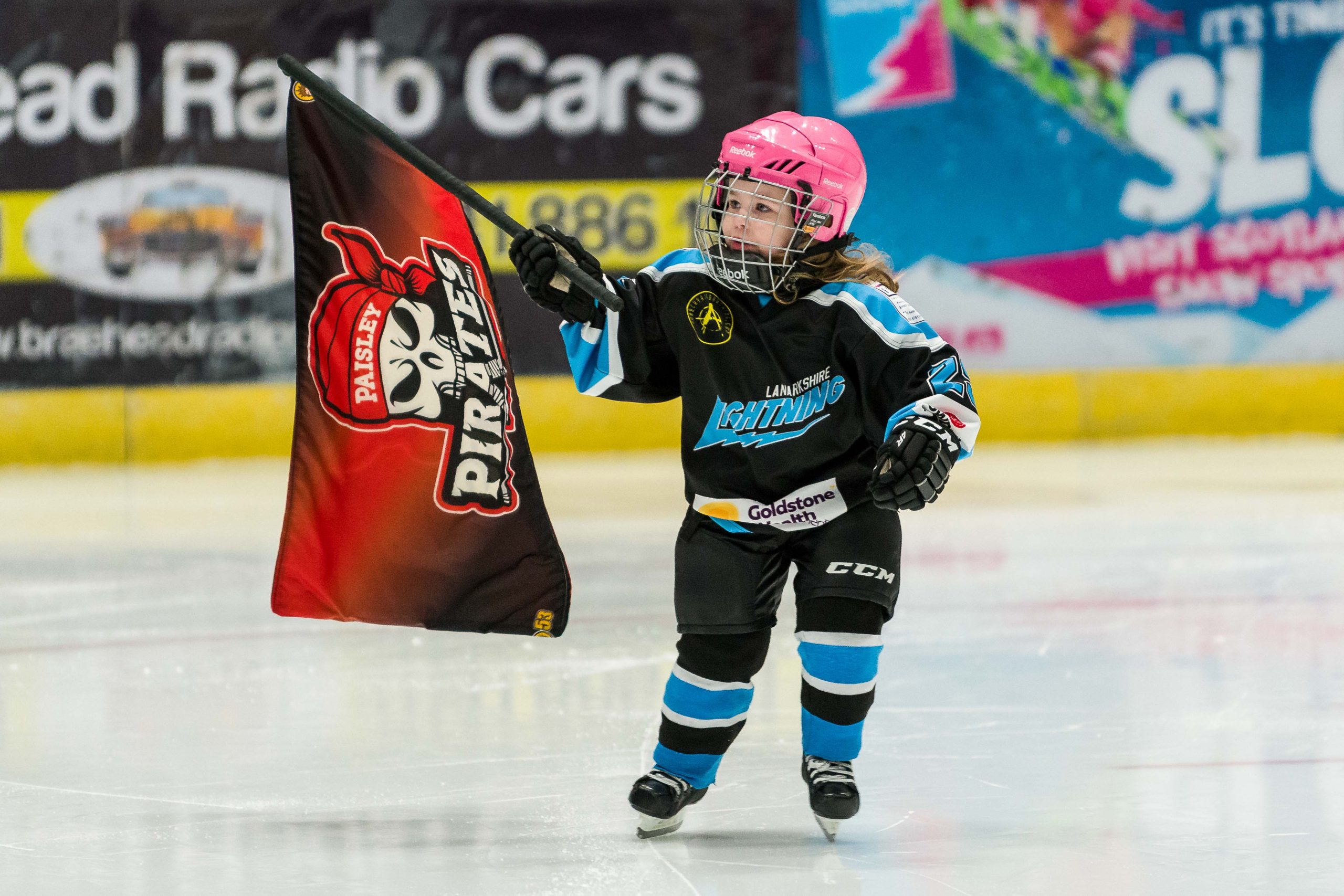 Paisley Pirates supporters are well used to seeing youngsters circle the ice before each home game, but prior to their match against Dundee Comets just before Christmas, one extraordinary skater brought special smiles to their faces, and set the tone for what turned out to be one of the best matches seen at Braehead Arena this season, as the Pirates and Comets fought out a thrilling 3-3 draw. Honours even in a hard fought 3-3 draw between Paisley Pirates and dundee Comets, in what was indeed a Christmas SNL cracker
on ,17 December , Picture: Al Goold (www.algooldphoto.com)

Pirates secretary Jackie Turley explained, “We don’t have our own junior teams because of the unavailability of suitable ice time for the kids, but we have an arrangement with Lanarkshire Lightning, the nearest junior ice hockey club, whereby they send along two of their players from their various squads to act as mascots for us, and lead the Pirates onto the ice before doing a lap of the ice. The crowd loves to see the kids, it puts a smile on their faces, and it gives a big thrill to the kids who get the chance to skate in front of several hundred spectators, usually including very proud parents and other relatives. Our ace photographer Al Goold also captures them on camera so all in all it’s quite a memorable night for the kids, and the supporters love it.”

“In the halcyon days at the Lagoon, there were about 150 kids from a very young age, up to maybe 19, playing for the various under age teams in Paisley, and while that’s not possible at the present time, we want to be able to form partnerships with other clubs which help encourage youngsters to take up the sport, and we know from experience that there are a number of kindred spirits in this respect within Lanarkshire Lightning.”

She went on, “At the Dundee match, we had 4 year old Eilidh McGuire out with one of the Pirates’ flags and leading the team out and she really took a trick with the larger than usual crowd we had in. She was hardly the height of nonsense, and when she skated her wee legs were going like pistons as she went round the Arena, but boy, the crowd took to her big time and she got a huge cheer when she came off the ice with her team mate Rory Somerville.”

“Lanarkshire Lightning have amongst their coaching staff current and former Pirates in the persons of Warren Crawford, Colin McMillan and Robert Henderson, and we’re absolutely delighted to have an arrangement with the club that allows us to encourage supporters to take an interest in junior ice hockey, while giving youngsters the comparative thrill of skating in front of probably the biggest crowd they will get the chance of skating in front of at their tender age.. We might not get the same thrill out of it as the kids obviously do, but we’re certainly pleased to give the kids a thrill that they maybe won’t get for a few years to come.”

“Maybe someday a match between the Lightning and Paisley Pirates juniors will become a reality, but in the meantime we’ll be more than happy to keep working with the Lightning to give these young kids an experience they’ll remember for a long time.”