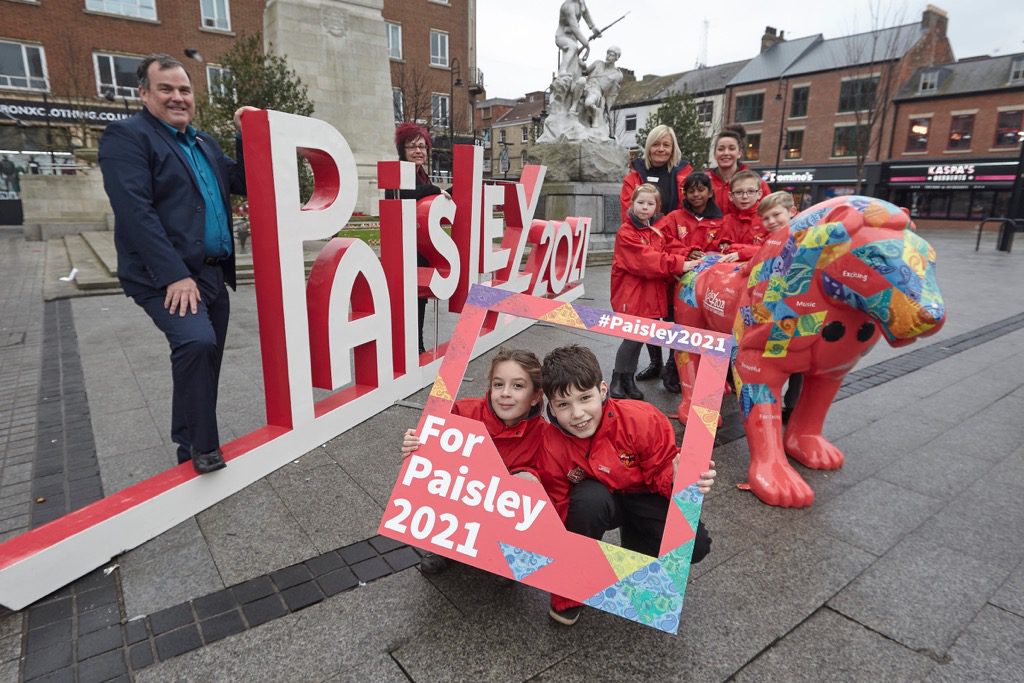 A group of Hull school pupils were met by a giant lion – thanks to one of the places hoping to follow Hull as the next UK City of Culture. Members of Paisley’s UK City of Culture 2021 bid team are in Hull to make their final pitch to the DCMS judging panel ahead of the 2021 title decision on Thursday night.

Paisley is the only town and only Scottish place on the 2021 shortlist – with the winner to be announced live on BBC’s The One Show on Thursday night live from Hull.

And the team were met by pupils from Hull’s Paisley Street school – who were delighted to find the fibreglass Paisley 2021-branded lion, part of a public art trail which took over the town last summer.

Passers-by in Hull’s Paragon Square were also greeted by giant Paisley 2021 letters, as members of the bid team handed out flags to locals.

Paisley – the one-time centre of the world’s textile industry and known for the global fashion icon, the Paisley Pattern – is bidding for the 2021 title as part of a wider plan to transform its future using its unique and internationally-significant cultural and heritage assets.

Leading the Paisley delegation was Councillor Iain Nicolson, leader of Renfrewshire Council, and chair of the Paisley 2021 partnership board.

He said: “Paisley’s creativity was once carried around the world as our weavers created the intricately-patterned shawls named after us – and as a major trading route of the time, Paisley will have flowed through Hull.

“With a Paisley Street in the city, Hull is just one of many to have a little bit of Paisley in it, so we were delighted to invite the children of that school down to join us and meet our lion.

“That internationally-significant heritage sits at the heart of our bid to be UK City of Culture 2021 – we want to harness the power of our global links to transform the town’s future.

“We have spent the past year watching and enjoying the fantastic journey Hull has been on in the lead-up to and during the city’s year in the international spotlight.

“Hull 2017 has been a fantastic spectacle which sets an example to us all over the power of culture to regenerate a place’s fortunes – and we would love the chance to follow in their footsteps.

“We have a programme planned for 2021 which will celebrate the threads that bind people, communities and nations, as well as what makes Paisley important to the UK and the world.

“And with an international airport on our doorstep we’re easy to reach – so if we are lucky enough to throw a party in 2021, we’d love the people of Hull to come and join us.”

Paisley is joined on the UK City of Culture 2021 shortlist by Coventry, Stoke, Sunderland and Swansea.