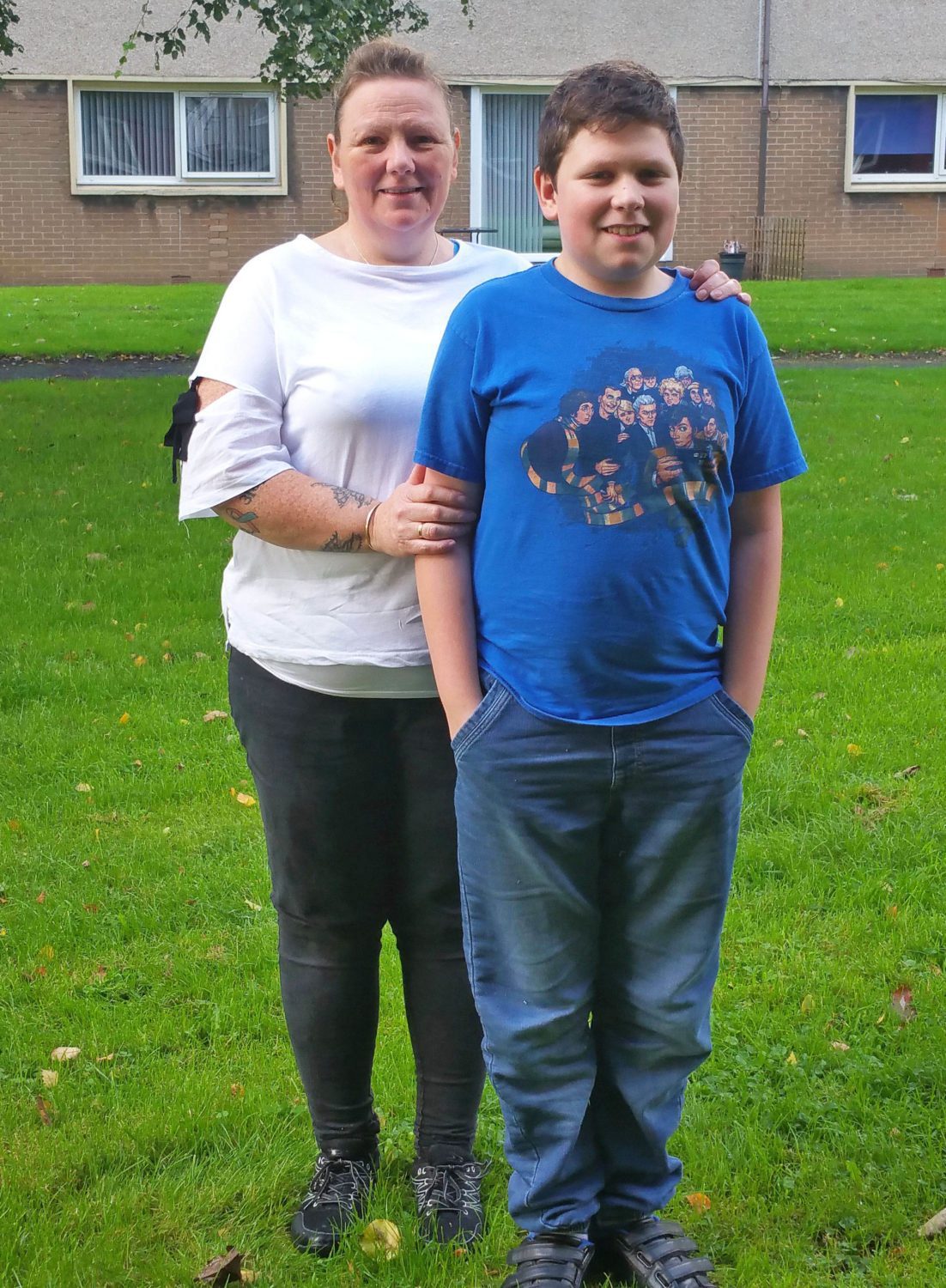 THE mum of an autistic teenager has told how the condition can lead to her son having a sudden “meltdown” in the middle of a crowded place.
Julie Macdonald says it’s like “shaking a bottle until it explodes” when 13-year-old Lewis is faced with an overload of sudden loud noises, bright lights or even different smells. Julie, from Paisley was speaking as the intu Braehead shopping and leisure destination joined with the National Autistic Society to launch the first UK-wide Autism Hour.
Shopping malls owned by intu all over the country yesterday (Monday October 2) reduced their lights, music and other background noise for an hour at 10am. And Julie hopes this will encourage other businesses and organisations to make small adjustments that can make a big difference to autistic people and their families.

Julie also told how passers-by, who don’t understand what is really happening, often mistakenly assume that Lewis is just a badly-behaved teenager having a strop when things get too much for him.
She explains: “It can build up throughout the day, starting first thing when Lewis just isn’t himself. That’s the first shake of the bottle.
“Then we might be running a bit late and I have to tell him to hurry. That’s another shake.

“His computer might be running slow, or swimming might be cancelled, something might happen with his siblings and all the wee niggles build up and eventually he explodes. The final trigger could be the simplest thing.
“When this happens Lewis can flap, pace up and down, or just stay rigid and refuse to move. Sometimes, he even hits his head with his hands and people around us assume he’s having a teenage strop and they start tutting.”
Julie adds: “Sometimes Lewis holds my hand and that also makes people stare because he’s almost as tall as me.

“It’s upsetting and I feel like people are judging me, they think I’m a bad parent, that Lewis is spoiled, and I can’t control him.
“I would love to be able to explain to people what’s really going on, but it’s more important that I keep the situation with Lewis under control. I wish they weren’t so judgmental, but I just try to ignore it.”
The intu Braehead mall is Julie’s local shopping centre and she says: “I’m really pleased they‘re taking part in Autism Hour, because the lights, noises and smells can be difficult for autistic people.

“Lewis doesn’t always struggle in the shopping centre, as it really just depends what else has been happening that day and how he’s feeling. I tend to go shopping by myself, but not all parents of autistic children have someone who can help with childcare.
“I know that businesses need to operate. If they sell food, there’s going to be a food smell. Shops that sell bath products are going to have a smell. That’s just the way it is. “However I do think shopping centres could do more to think about how bright and fluorescent lighting affect customers, and also about music – what volume it’s played at and how it feels when music from different shops clash.
And Julie’s message to other shoppers is: “Please don’t stare, tut, or frown if you see a child, young person, or adult who is having a meltdown or seems unable to cope. It’s really important that autistic people are able to live their lives and spend time with their families. We should all feel accepted.”

Mark Lever, Chief Executive at the National Autistic Society, said: “Like anyone, people on the autism spectrum and their families want the opportunity to go to the shops and access services. But many find the often busy, loud and unpredictable environment overwhelming.

“Our recent survey revealed 64% of autistic people avoid going to the shops because of their autism.

“intu has pioneered autism-friendly shopping and we hope that more venues will be inspired to do their bit and make sure autistic people and their families have the same chance to enjoy shopping as everyone else.”
Lydia Brown, intu Braehead’s community development manager said:“We want to put a smile on the face of everyone who visits an intu centre and this means training our staff, supporting our customers and working with brands in the centre as well as organisations like the National Autistic Society to provide a welcoming and accessible experience for all.”

Log on to www.autism.org.uk/autismhour for more information about the National Autistic Society’s Autism Hour.

Glasgow News? Daily Updates part of our network
Tips for living off a state pension

Day the Mods marched on Ferguslie!
Scroll to top