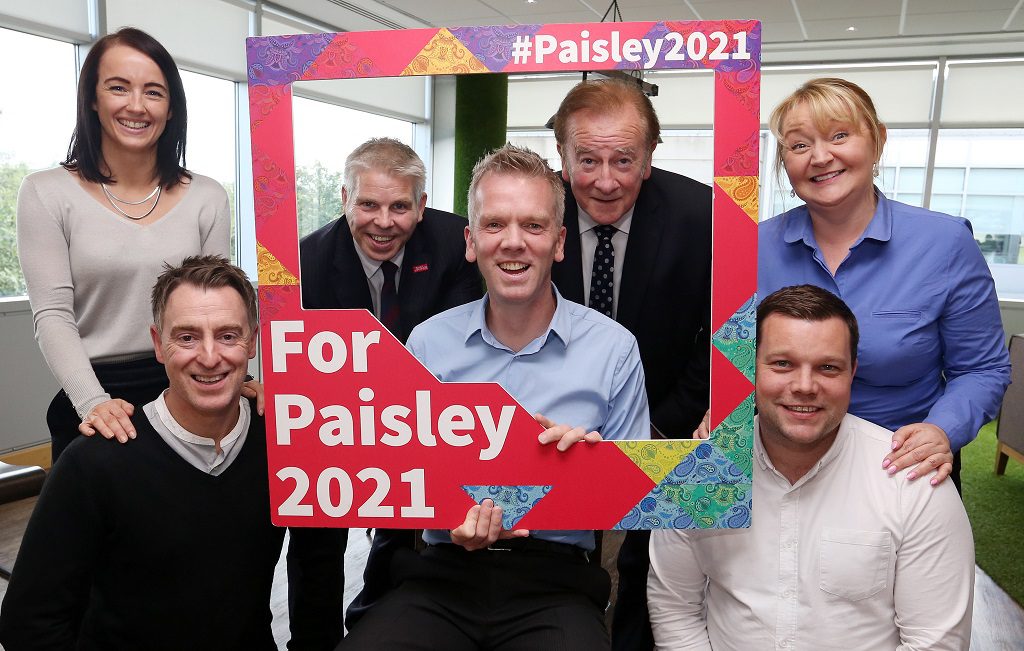 Renfrewshire commerce chiefs believe Paisley’s bid to be UK City of Culture 2021 could be an economic bonanza for the area – and will financially support the town’s potential year in the spotlight.

The area’s largest business membership organisation – Renfrewshire Chamber of Commerce – will make a five-figure contribution to the costs of hosting the prestigious culture title, should Paisley win.

Bid bosses estimate hosting the title could bring in a £172m economic boost for the local economy – while creating the equivalent of 4,700 jobs over a ten-year period.

Paisley is expecting to hear soon whether bosses at the UK Government’s Department for Digital, Culture, Media and Sport have placed the town on the shortlist for the next stage of the competition.

If so, the town will submit a second-stage bid in the autumn, with the winner announced at the end of the year.

Management from the chamber showed their support on a visit to one of their members – Braehead-based internet firm Boston Networks, which recently won a £1m council contract to supply free public wifi to Paisley town centre.

Renfrewshire Chamber are following in the footsteps of other big-name firms who have agreed to support the 2021 year – Glasgow International Airport, intu Braehead, Diageo, Gordon Leslie Group and Malcolm Group, as well Coats Group PLC, the world’s largest industrial thread manufacturer, which started life in the town.

The organisation’s chief executive Bob Grant, who is a member of the Paisley 2021 executive bid team, said: “The chamber board are financially supporting Paisley 2021 because they recognise winning the title would bring a massive economic boost to Renfrewshire, and our members would share in that.

“The bid has already raised Paisley’s profile and helped promote it as an attractive place to visit, work and invest.

“No matter what happens with the shortlist announcement, the work to create a new visitor economy based around Paisley’s unique heritage assets will continue, creating jobs and footfall for local traders.

“But winning the title would take that to new levels – giving us a year-long programme of major events and an international platform from which to build a long-lasting economic transformation, just as previous winners Derry did in 2013 and current title-holders Hull are doing now.

Councillor Iain Nicolson, Renfrewshire Council leader and chair of the Paisley 2021 partnership board said: “We thank Renfrewshire Chamber of Commerce for their generous contribution to the 2021 bid.

“The bid supports a wider plan by the council to use our tremendous events, architecture and history to make Renfrewshire a key visitor destination.

“Part of that is around making sure a 21st-century infrastructure is in place – which is why it is fitting Boston Networks are involved in this announcement, as the work they are doing for us to roll out free public wifi is key to that.”

Scott McEwan, Chief Executive of Boston Networks, added: “We are delighted to add our backing to the Paisley 2021 bid – the activity around the bid is already creating opportunities for local businesses like Boston Networks and there will be significantly more benefit to our business if Paisley wins.

“I would urge all our fellow chamber members and other local businesses to consider how they can get involved – by working together to make the town a more attractive place to invest and visit, we all stand to benefit.”

Renfrewshire Chamber provides networking and mentoring opportunities, as well as legal and HR support, to its hundreds of members. More information is at renfrewshirechamber.com

As well as the design and deployment of fixed and wireless networks, Boston Networks are experts in smart building systems, including fire and security solutions, and have a dedicated support services division.