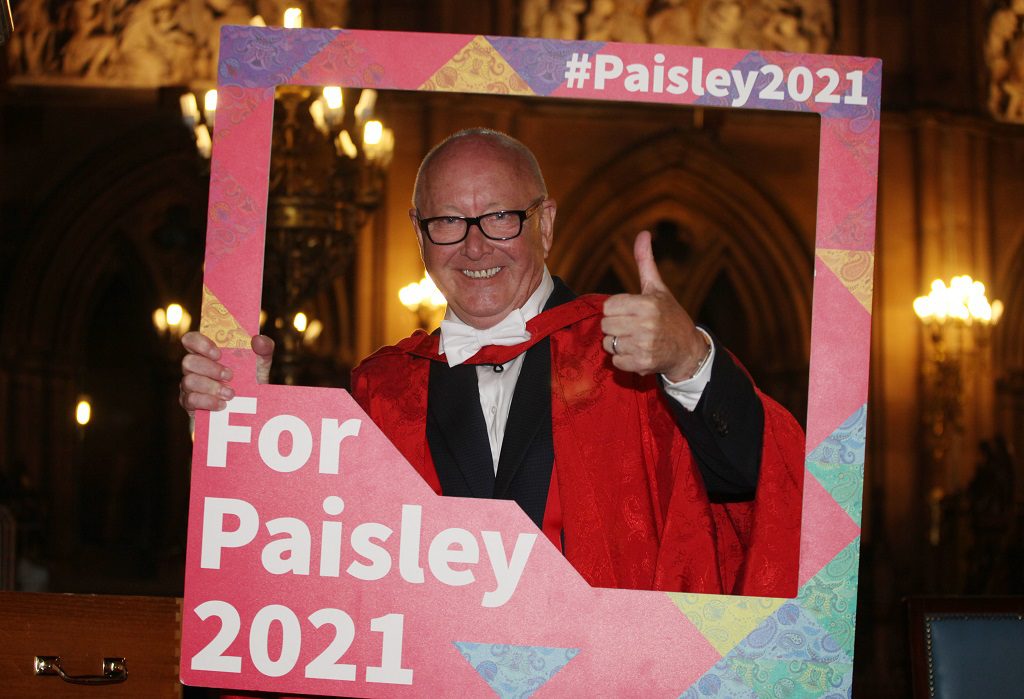 The man known as ‘the godfather of hairdressing’ has backed Paisley’s bid to be UK City of Culture 2021 – and told how his upbringing in the town helped shape his long and successful career.

Trevor Sorbie MBE was born in the town and grew up in the shadow of Anchor Mill before his family moved to London, where he went on to become one of the country’s most celebrated hairdressers.

He was in back in town yesterday to receive an Honorary Doctorate from the University of the West of Scotland during its graduation ceremony in the stunning surroundings of the Thomas Coats Memorial Church.

In his 50-year career, Trevor has been named British Hairdresser of the Year four times – more than anyone else in the industry – while running a number of his own salons, and his own academies in London and China.

He has also launched his own line of hair products, been a television regular, and started the charity mynewhair, which supports the industry to provide a wig-styling service to people suffering from cancer and hair loss.

And in support of Paisley 2021 he said: “I was 11 when I came down to England…but I grew up in a modest tenement building…I wasn’t brought up with a silver spoon in my mouth.

“What Paisley gave me was something I never forget – when in the dizzy heights I live in these days I always remember Paisley.

“That’s my grounding, and I like to think of where I’m from and where I am. From that point of view Paisley is ingrained in me and I love it – I will never forget this place.”

Professor Craig Mahoney, Principal and Vice-Chancellor of University of the West of Scotland, said: “Trevor has extremely close links with Paisley and we were delighted to welcome him back to his home town to present him with this award.

“This Honorary Doctorate recognises not only his outstanding contribution in the field of business and entrepreneurship, but also his social awareness of suffering in cancer patients; both areas in which UWS shares a passion.”