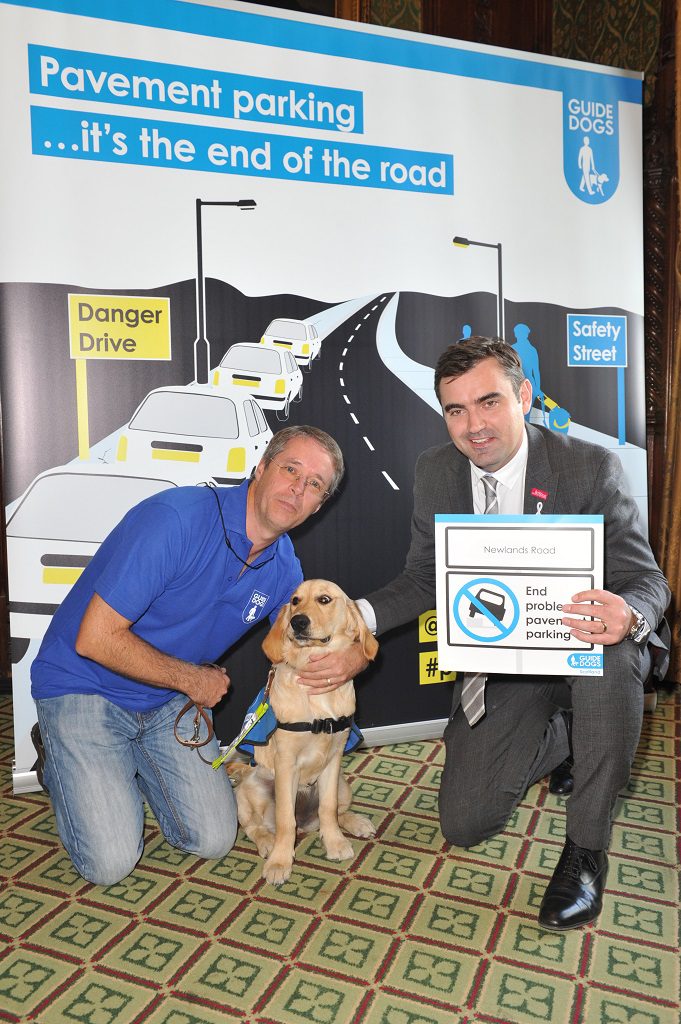 Gavin Newlands, MP for Paisley and Renfrewshire North, has attended a Guide Dogs event at the House of Commons to show his continued support for the campaign to end problem pavement parking.

At the event, the MP for Paisley and Renfrewshire North heard from guide dog owners about how parked cars blocking the pavement force them to walk in the road, into the path of traffic they cannot see. Mr Newlands heard that some guide dog owners face these dangerous situations on a daily basis, risking their safety every time they go shopping or make the school run.

Research by YouGov for Guide Dogs shows that 54% of UK drivers admit to parking on the pavement, with more than a quarter (29%) of those doing so a few times a month or more. But only just over half (55%) of these drivers think about their impact on people with sight loss.

Pavement parking particularly affects people with visual impairments, parents with pushchairs, wheelchair users and other disabled people. According to a Guide Dogs survey, 97% of blind and partially sighted people have encountered obstacles on the pavement, and 9 out of 10 have had problems with pavement parked cars.

Guide Dogs is campaigning to make pavement parking an offence, except in areas where local authorities grant specific exemptions. This is already the case in London, but outside London, councils struggle to tackle unsafe pavement parking because they can only restrict it street by street.

“No one should be forced to brave traffic by cars parked on the pavement. From my local surgeries that I hold throughout Renfrewshire, I know the problem of cars parking on the pavements affects people from all backgrounds, particularly disabled people, the elderly and those with prams.

“I welcome the plans that are in place in Scotland to introduce a law which will hopefully end the problem of pavement parking. We should all be able to walk the streets without being obstructed by cars parked on pavements.”

“Pavement parked cars can turn the walk to work or trip to the shops into a dangerous obstacle course. It’s a nuisance for anyone, but if you have a visual impairment or a toddler in tow, stepping out into the road with moving traffic is just too big a risk.

Our research shows that most drivers who park on the pavement know that it can be dangerous for pedestrians, but many do so regardless. That’s why we need clear rules so that drivers only park where it’s safe.

We know that the Scottish Government is committed to a law to curb unsafe pavement parking. We welcome the consultation on this issue and look forward to them bringing forward a Bill in the near future.”

Glasgow News? Daily Updates part of our network
Follow these 5 steps to make sure you meet your assignment deadlines