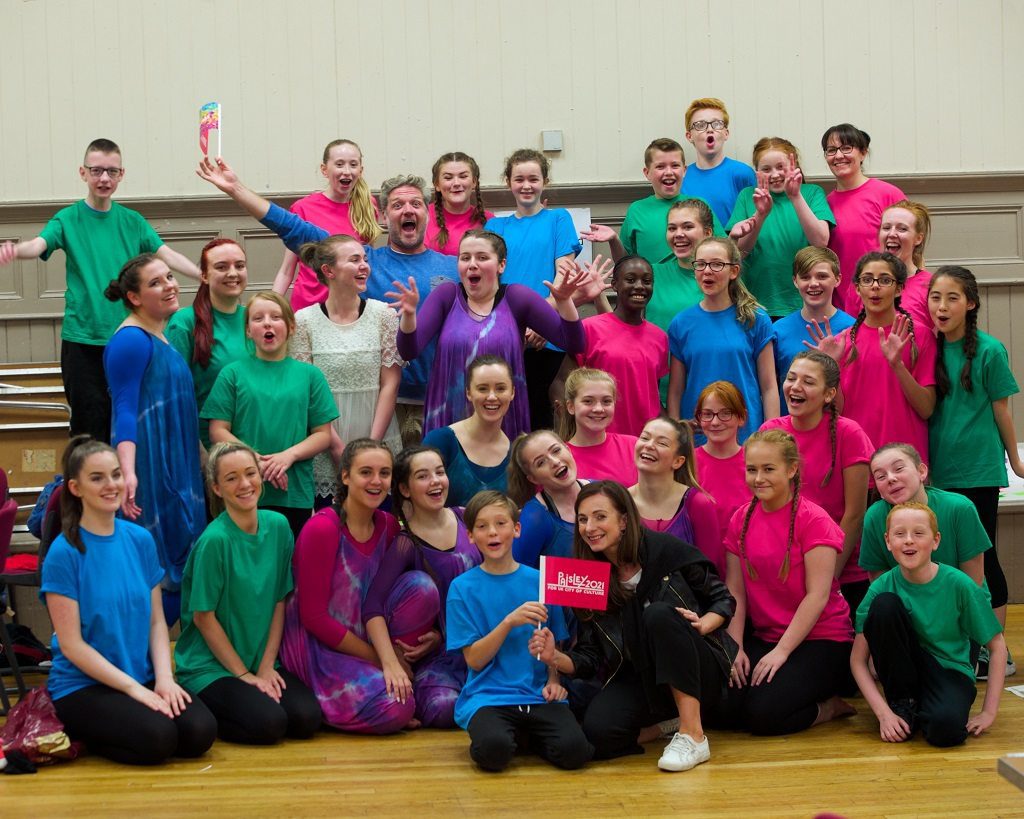 A project funded by Paisley 2021 has enabled children in Renfrewshire to learn dance from some of the best in the business by attracting an Olivier award-winning dance company to the town.

The right2dance company in Paisley secured more than £13,000 funding from the Paisley 2021 Culture, Heritage & Events Fund to finance a weekly free dance class for children aged 11 and above as well as to bring dancers from internationally renowned choreographer Matthew Bourne’s New Adventures & Re:Bourne company to Paisley to deliver a week-long series of workshops to the young dancers. The funding also allowed right2dance to run a series of taster sessions in schools throughout Renfrewshire.

Over the course of the week-long sessions led by New Adventures & Re:Bourne dance artists Sophia Hurdley and Alan Vincent the dancers created a new piece around the themes of weaving and the mills inspired by Paisley’s history and heritage.  The classes culminated in a performance at Paisley Town Hall where the young people showcased their new work to friends and family.

Paisley was recently named as the only Scottish bidder on the five-place shortlist to be UK City of Culture 2021, run by the UK Government’s Department for Digital, Culture Media and Sport.

Alana Hughes (11) is one of the children taking part in the class funded through Paisley 2021.

She said: “I danced when I was much younger but then my teacher moved away so I stopped. I found out about the Paisley 2021 class after right2dance came to my school and I decided to give it a go. I love the class. Everyone is really nice and the teachers are great.

“Learning from Sophia and Alan this week has been amazing. It feels like I’ve been a professional dancer for the week and I’ve learned so much from them.

“It’s a great feeling dancing in shows – I feel really proud of myself afterwards. I’d definitely like to be a professional dancer when I’m older.”

New Adventures & Re:Bourne Dance Artist, Alan Vincent said: “It’s been great to spend this much time with the kids to get to know them and see them learn more as the week’s gone on we usually only get to spend a day or two with the groups during the workshops.

Sophia Hurdley from New Adventures & Re:Bourne added: “There’s definitely a lot of potential in the groups we’ve worked with this week.”

When asked what benefits a successful UK City of Culture 2021 bid would mean for Paisley Sophia said: “It could only be a great thing for the town. It would attract all sorts of artists from various backgrounds and companies to come to the town and work with groups like right2dance which is a great thing.”

Aileen Palombo, right2dance Company Coordinator, said: “The funding we secured allowed us to run a class that is accessible to everyone. By removing the barriers it’s given young people the chance to take part in dance and see if it’s something they would like to learn more about.

“It would be difficult to bring a dance company like New Adventures & Re:Bourne in to teach the young people without the funding and they have all really enjoyed the workshops and will take a lot away from what they have learned. The Paisley 2021 bid is really helping to shine a light on cultural programmes happening in the town.”

The Culture, Heritage and Events Fund is designed to support Paisley’s bid for UK City of Culture 2021 by raising ambition, getting people involved in culture and unlocking the area’s creative potential, while building the capacity of the local creative scene.

More than 50 different projects have benefitted from the fund to date in order to deliver a range of projects covering everything from dance classes and music tuition to hosting animation workshops, digital music production and film making.

“The fund is helping create opportunities across Renfrewshire to open the doors to a range of cultural activities and allow people to experience and enjoy them. Culture makes people’s lives better and projects like this illustrate how we are already delivering on Paisley’s bid ambitions by creating opportunities for people who might not normally have had them

“It is inspiring to see how much the young dancers have benefited from the tuition they’ve received from these world-class dancers.

“The young dancers who have taken part in the workshops and performance demonstrate how much talent we have here in Paisley and I am sure they have all been inspired by what they have learned from the fantastic New Adventures & Re:Bourne dancers.”

Paisley was recently confirmed as the sole Scottish bidder for the UK City of Culture 2021 alongside Coventry, Stoke, Sunderland and Swansea. A final bid will be submitted in September 2017 with the winner announced in December.