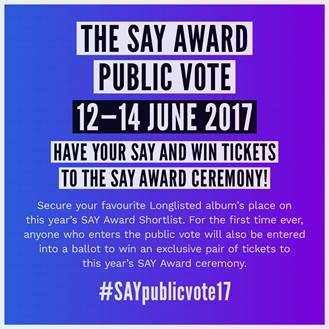 The Scottish Album of the Year (SAY) Award public vote is open from Monday 12 June until midnight on Wednesday 14 June, giving music fans all over the world 72 hours to choose their favourite album from The SAY Award Longlist.  The public’s choice will be guaranteed a much sought after slot on The SAY Award Shortlist, due to be exclusively revealed as part of BBC Music Day 2017 and BBC Radio Scotland’s The Quay Sessions on Thursday 15 June. Simulcast on BBC Radio Scotland and 6 Music, the show features live performance from The Charlatans, Arab Strap and Lau. The public can now cast their vote in support of the album they think should be on the shortlist and for the very first time ever, their vote will automatically enter them into a ballot to win an exclusive pair of tickets to this year’s SAY Award ceremony on June 28.  The album with the most votes at midnight on Wednesday will make the list, earning the artist a guaranteed £1,000 and the chance to be crowned Scottish Album of the Year 2017 and earn the £20,000 prize.

This year’s longlist symbolises the variety of emerging and established talent in Scotland including a diverse range of genres and internationally renowned acts.

The full SAY Award 2017 longlist is as follows (in alphabetical order):

Produced by The Scottish Music Industry Association (SMIA), and now in its sixth year, The SAY Award has grown to become the most prestigious music prize in Scotland. Previous winners include Young Fathers (2014) and Kathryn Joseph (2015). Composer and performer Anna Meredith will also join BBC Radio Scotland’s The Quay Sessions to share news of her year since winning the SAY Award for her album, ‘Varmints’ in 2016.

Robert Kilpatrick, Project Manager of The SAY Award said: “Taking part in the public vote really is the chance to have your SAY. Not only will your vote play an important part in the determination of The Shortlist, but for the first time ever, anyone who enters the public vote will also be entered into a ballot to win an exclusive pair of tickets to this year’s SAY Award ceremony, taking place on Wednesday 28 June at Paisley Town Hall. We’re delighted to be opening up the ceremony this year, rewarding those who engage with the process and champion the outstanding Scottish albums celebrated.”

Glasgow News? Daily Updates part of our network
Start-up businesses: getting off on the right foot