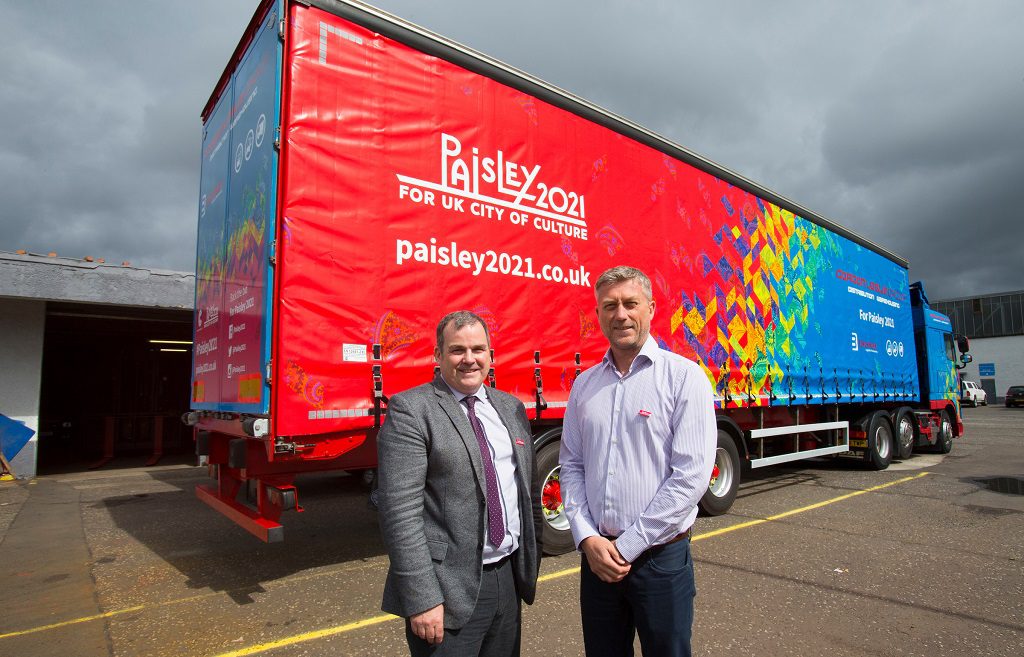 A Renfrewshire-based distribution company will be flying the flag for Paisley’s UK City of Culture 2021 bid – after revealing a branded truck and trailer.

Hillington-based Gordon Leslie Group provide distribution and storage services throughout the UK and beyond, and joins a wide range of companies who have agreed to provide funding should Paisley’s bid be successful.

And new Renfrewshire Council leader Iain Nicolson – also the chair of the Paisley 2021 Partnership Board – paid the company a visit to see the truck and trailer – covered in colourful 2021 branding – for himself.

Paisley is bidding for the title as part of a wider push to use the area’s unique cultural and heritage offer to transform its future.

The town’s initial bid was submitted in April and competition organisers at the UK Government’s Department for Culture, Media and Sport are due to announce the shortlist for the second stage over the summer.

To date the Paisley 2021 bid has been backed by almost 200 local firms – including internationally-important names Glasgow Airport, intu Braehad and WH Malcolm.

There has also been support from Coats PLC – which started life in the town and remains the world’s largest industrial thread manufacturer – and whisky giant Diageo, who bottle 30% of the world’s Scotch from their Shieldhall base.

Councillor Nicolson said: “The UK City of Culture bid has already taken awareness of what Paisley has to offer to a new level. No matter what happens next, that will bring new visitors and investment into the area for local businesses to feed off.

“Should the bid be successful, there would be even more economic opportunity and thousands of new jobs for Renfrewshire, as well as all the social benefits from creating opportunities for people to get involved in cultural activity.

“We are fortunate to be home to large employers such as Gordon Leslie Group – we are delighted they have thrown their support behind the bid and it’s great to think the truck and trailer will be spreading a bit of Paisley on its travels.”

Gordon Leslie Group is a second-generation family business, which has been based in Renfrewshire almost 50 years.

Managing director Craig Leslie said: “The firm was started by my father and has been in Renfrewshire since the 1970s – first at Abbotsinch Industrial Estate, then Linwood, and now Hillington.

“Paisley 2021 is a fantastic opportunity to put the area back on the map and will provide a much-needed boost for local businesses in terms of attracting investment and creating jobs.

“We are behind what the bid is trying to achieve and I would call on other businesses to consider how they could get involved and help promote the town.”

You can see the Paisley 2021 business wall and find out more about the bid at paisley2021.co.uk

Events in The Hoose
Scroll to top