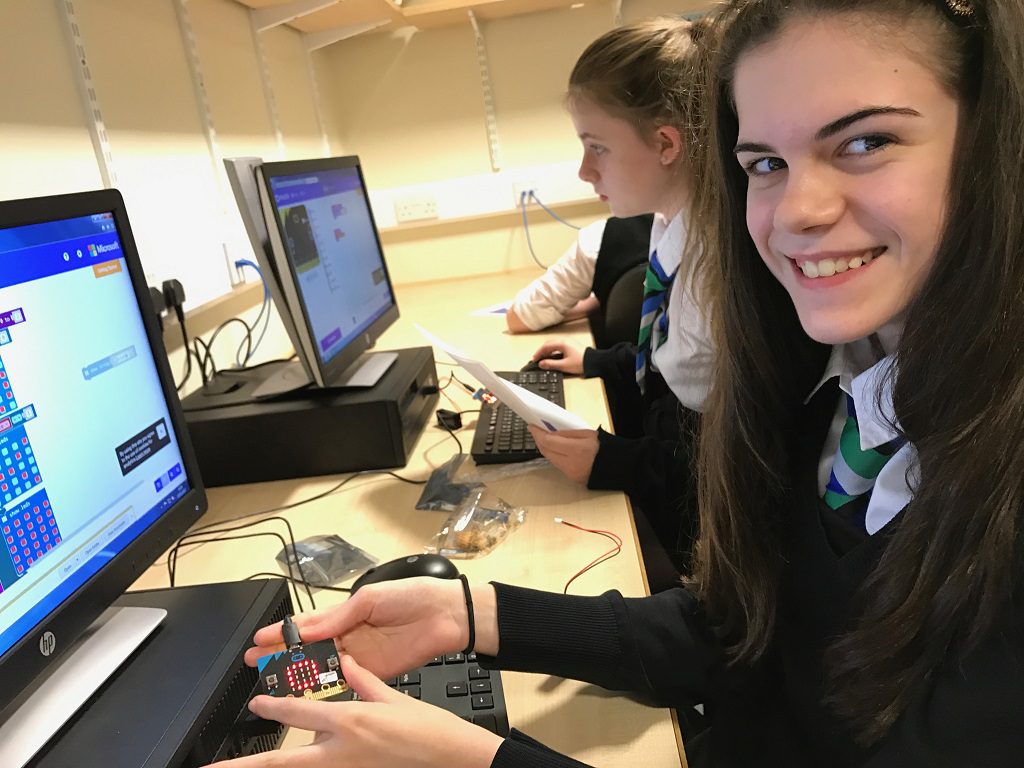 West College Scotland’s Digital Xtra Project, funded by Skills Development Scotland, is now well underway with the launch of coding clubs. Run by some of the College’s computing staff and students, the clubs are aimed at engaging S1/2 pupils in the use of the BBC Micro:Bit and encouraging them to become more involved in coding. The clubs have been launched successfully in three Renfrewshire Secondary Schools: Paisley Grammar School, St Benedicts High School and Renfrew High School. All of the clubs have been well attended and have seen some great activities taking place including making music from Katy Perry & Star Wars and developing a pong game… controlled by a banana!

Chris Wilson, computing teacher from St Benedicts High School said: “We had a whole lab full of pupils turning up after school in their own time.  The best thing was the gender split – exactly 50/50!  Really great to see so many girls taking a genuine interest in STEM and coding in particular. The hands-on Micro:Bit coding is going down really well with the pupils.  I think the idea of writing code to run on a physical device they hold in their hand gives them something extra.  All pupils seem to have a love for technology and creativity so the Micro:Bit exercises really appealed to them.  The staff and students from West College Scotland have been absolutely fantastic with our pupils and I’d definitely recommend the club to any schools who missed out first time around.”

West college Scotland’s computing students involved in running the clubs are thrilled to share their skills with the pupils while gaining invaluable experience themselves. Michael Walsh, one of the students enrolled in the STEM Ambassador program, said: “This is was a great opportunity to introduce young people to the game development industry to try and get them interested in programming specifically as there aren’t enough people coming out of school and going into the game development sector. This experience is also different from my usual College week and it will be a great addition to my CV for future employment.”

Josh Balling, also STEM Ambassador student, adds: “Taking part in the coding club is a great way to get the kids thinking outside the box while having fun by creating their own code and seeing it work in front of them. Every pupil is interested and engaged and hopefully this could lead them down the path to a STEM career in the future.”

West College Scotland also hosted the second training session for Renfrewshire School Teachers as part of the project. The sessions are run in association with Microsoft Education, Renfrewshire Council and Paisley YMCA.

This time over 20 teachers from primary & secondary schools across Renfrewshire attended the session to further develop their technology skills for teaching and use engaging activities to encourage use of the Micro:Bit in the classroom.

The College is also happy to now be on the Digital Xtra Map, featuring all activities taking place across the country. To find them visit:www.digitalxtrafund.scot/find-an-activity/