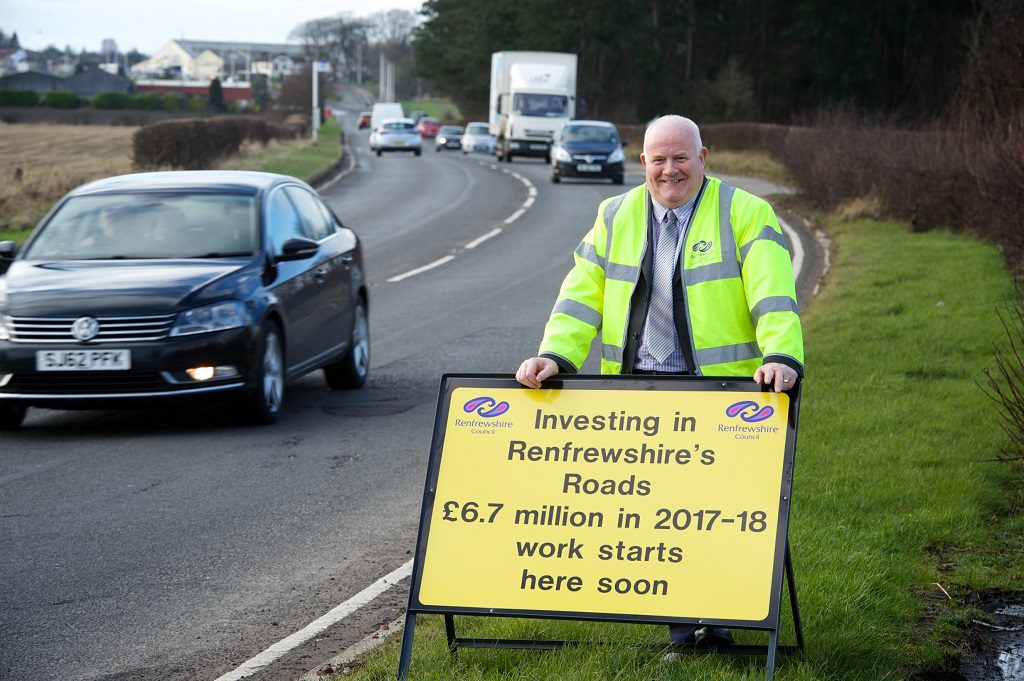 An extensive programme of roads maintenance is set to begin as £6.7million is invested in Renfrewshire roads across 2017-18.

Councillor Eddie Devine at the A8 Greenock Road, Inchinnan

The spend represents the largest single investment for maintenance in the roads network and is designed to improve key routes throughout the region.

The strategic roads network has been prioritised including Class A and B roads – as well as roads of local significance to particular communities.

The investment will allow Renfrewshire’s economy to continue to develop whilst freeing up extra resource for residential roads.

Key work programmes have already been registered with the roads commissioner- A8 Glasgow Road, Renfrew (Braehead) and A8 Greenock Road, Inchinnan – and are scheduled to commence in April.

Councillor Eddie Devine, Convener of Renfrewshire’s Environment Policy Board, visited the site of the A8 Greenock Road works and said: “As a council we recognise that improving the roads network is a key issue for Renfrewshire residents and as such we have invested accordingly.

“Resurfacing roads such as the A8 Greenock Road will allow road users to travel quickly and efficiently to their destination allowing the physical and economic regeneration of the area to continue.

“The £6.7m expenditure will make a tangible difference to the condition of our roads and will allow motorists and cyclists to use our road links safely and reduce the likelihood of accidents significantly.”

The 2016 Audit Scotland Report on Maintain Scotland’s Roads highlighted that around 60% of Renfrewshire’s roads are considered to be in an acceptable condition- which is around the Scottish average.

The report also identified that since 2011/12 to 2014/15, there had been an increase of around 2% in the road conditions in Renfrewshire.

Significant investment will allow this trend to continue and create a safer environment for all road users in Renfrewshire.

For more information on roads in the area, visit www.renfrewshire.gov.uk/roads