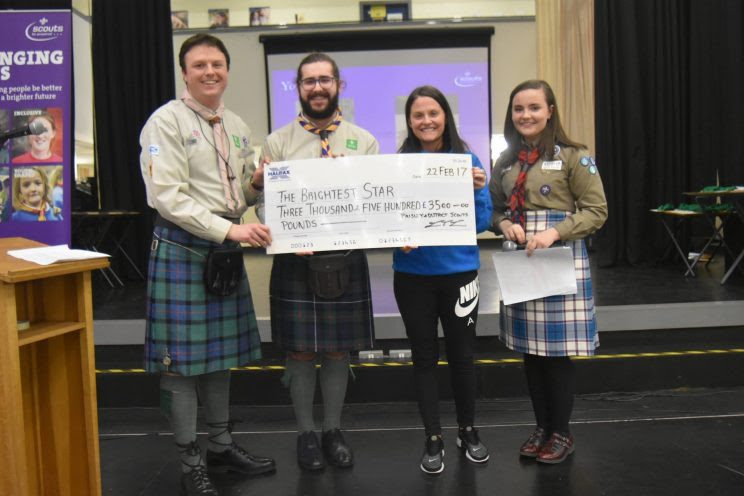 At the recent Founder’s Day celebration attended by over 400 people including Provost Hall, Scouts, volunteers, supporters and parents, Paisley & District awarded the Brightest Star with a Cheque for £3,500.

The gift came about following the District’s bi-annual Duck Race in the centre of Paisley. The event saw a profit of £7,000 with half going to local scouting and the other half being awarded to the much-needed Brightest Star.

“Arlene is a strong and passionate woman who at her darkest hour set up a charity which is there to help families who are dealing with the death of a young child. Arlene is an inspiration and I hope this small token will help her further the charity’s work.

“As always I am grateful to the people of Paisley, Barrhead & Neilston for supporting this event. This event comes about through the hard work of volunteers and the local community. It’s a privilege to be working with such dedicated individuals.”

“I can’t thank the Scouts enough for their hard work and dedication with the Duck Race. It was a real privilege for Brightest Star to be selected as their charity partner and their £3,500 donation will allow us to support families that have suffered the devastating loss of a son/daughter, brother or sister.

The Duck race was such a fun day and if you missed it, I would recommend that you don’t miss the next one”.