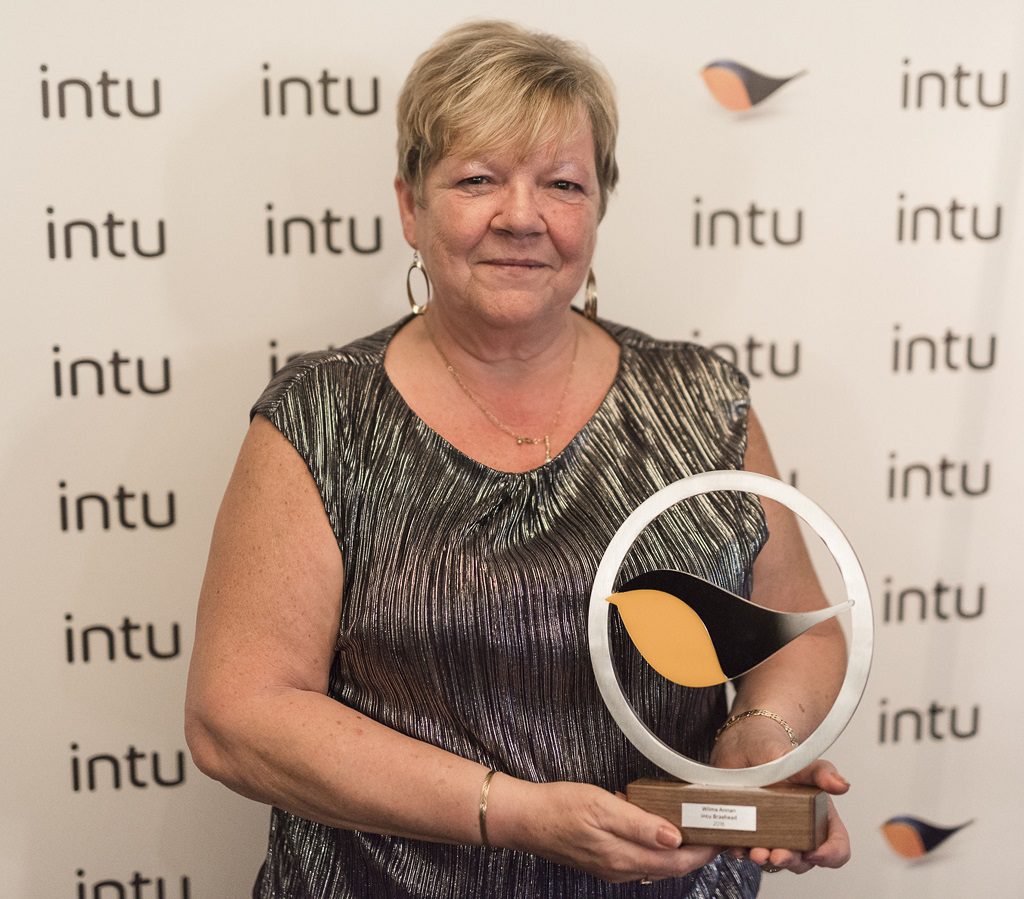 WILMA Annan is feeling on top of the world after her dream of visiting The Rockies in Canada just came true.

Wilma Annan after receiving her Win Your Dream Award.

Now there will be plenty mountains high enough for the cleaning supervisor at intu Braehead after she swept to victory in a national competition for staff run by the centre’s owners.

The 67-year-old from Hunterhill, in Paisley, was voted tops by intu in their Win Your Dream initiative, which is open to thousands of staff working in all the company’s 14 shopping centres throughout the UK.

The initiative celebrates employees across intu who have gone above and beyond to deliver the intu brand promise of making people smile, whether to intu’s 35 million customers, its tenants and members of the public.

Wilma won her £10,000 dream trip to Canada – where she will also visit nieces she hasn’t seen in 13 years, in Toronto.

She said: “I’ve always wanted to go on tour in The Canadian Rockies after I’d seen the fantastic scenery on television and in movies, but I thought I would never have been able to afford it.
“It will also be great seeing my nieces again after so long.”

Staff are nominated by colleagues for going the extra mile in their jobs and each centre has a monthly prize of a £50 intu Gift Card with the winner qualifying for the national quarterly prize.  The quarterly prizewinner then goes on to compete in the national Win Your Dream title.

Wilma travelled to London for the finalists’ lunch at The Savoy hosted by intu’s top executives, and she admits she couldn’t believe it when her name was announced as the national winner.

Wilma said: “I was flabbergasted, but I was over the moon and for once, I was lost for words.
“It’s great that the company are rewarding staff with the fabulous prizes in the Win Your Dream competition. I don’t know of any other company doing anything as big as this.”

Wilma had already won a trip to Benidorm she had chosen as her dream prize in the quarterly round of the competition.

Gary Turnbull, intu Braehead’s general manager said: “Wilma has been one of the unsung heroes at intu Braehead and she’s been here for more than 17 years since the centre opened in 1999.
“We’re delighted that Wilma’s dedication to her job and to our shoppers has now been recognised. The Win Your Dream contest is just one way the company shows how much they appreciate their staff.
“She might be heading for The Rockies, but Wilma is one of the rocks that the foundation of our success is built on.”

Glasgow News? Daily Updates part of our network
Live music in the HOOSE