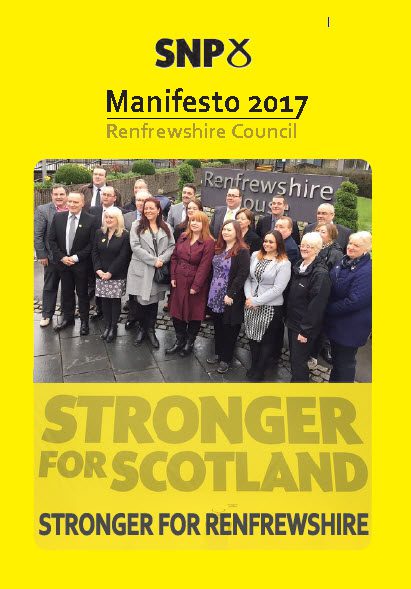 The SNP have launched their Renfrewshire manifesto for the Council election on May 4th.

Local candidates were joined by party members at Renfrew Town Hall, which was refurbished under the last SNP Administration, as they unveiled their plans for the area.

Former SNP Council leader Derek Mackay MSP and SNP Group Leader Cllr Kenny MacLaren said improving the environment and roads, as well as putting the community at the heart of decisions, would be key to a new SNP administration.

Mr Mackay, who now serves as Finance Secretary, also highlighted some of the achievements of his own council administration between 2007 and 2012.

SNP leader and First Minister Nicola Sturgeon said local candidates were ready to work hard to deliver key priorities, and also said she was proud at the local 50/50 gender balance of candidates.

The SNP are fielding 24 candidates, made up of 12 men and 12 women, across the 12 Renfrewshire wards.

“This May, people will go the polls to elect a new council for Renfrewshire.

“All of our local candidates are ready to work hard to deliver key SNP priorities such as expanding childcare, closing the attainment gap, protecting local services and empowering communities.

“We’re proud to have more women standing for the SNP in Renfrewshire than ever before, with a 50/50 gender balanced team of candidates.

“On May 4th put your trust in the SNP to work hard for Renfrewshire and to build a better Scotland.”

“The people of Renfrewshire have an opportunity to elect a new Council with fresh ideas and a renewed sense of purpose.

“The very fact that we are launching the manifesto here in Renfrew Town Hall, a building renovated, and under budget, when I was Council leader, shows just the kind of thing an SNP Council administration can deliver.

“With the new Johnstone Town Hall, new Park Mains High School in Erskine, and town centre and council housing upgrades across Renfrewshire just some examples of the SNP delivering for locals.

“The SNP are fielding a dynamic team, which I am very happy to support.

“The manifesto launched today reflects the desire of Renfrewshire people to see improvements in education, the environment, local infrastructure and all whilst keeping the council tax as low as possible.”

“This manifesto outlines our aims for the future and how we intend to take Renfrewshire forward.

“For too long the people of Renfrewshire have been ignored by the current Labour administration.  Whether it’s people in Ferguslie awaiting demolition of their houses to make way for a sports centre or residents looking for decent streetlights and roads when Labour are pouring millions into vanity projects like duck ponds at the Racecourse – Labour simply aren’t listening.  We need to, and we intend to change that.  No longer will local groups turn up at the lottery of the Local Area Committee feeling that decisions have been taken in private about who should get funded.

“Our manifesto aims to focus on working more closely with our local communities; empowering them to grow and take control of resources that are key to them and to work to create a better, cleaner and greener environment for all.”