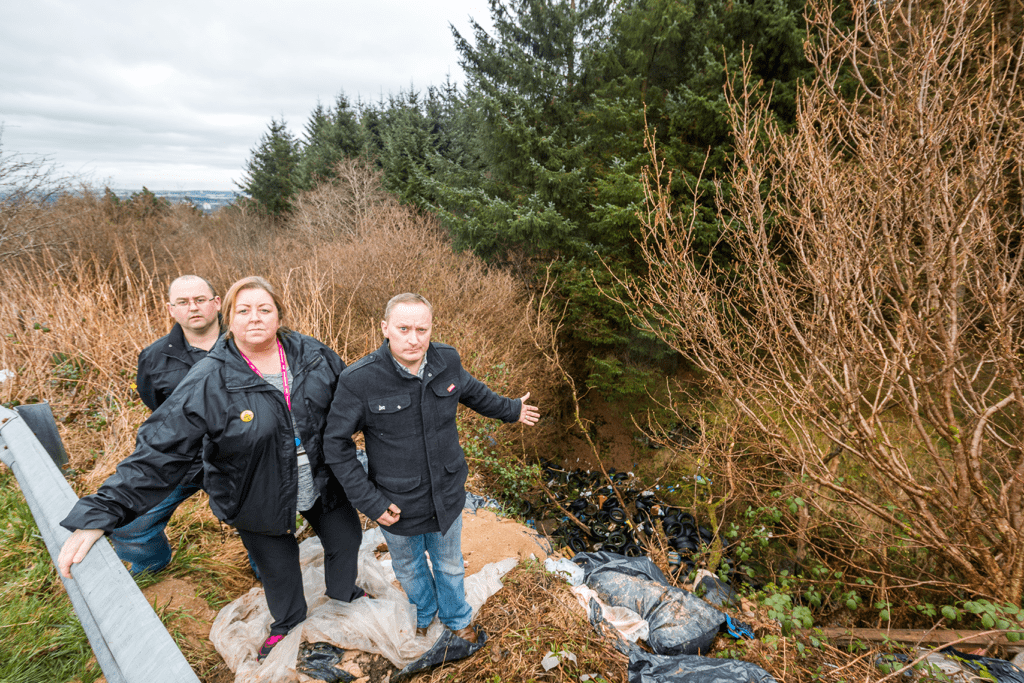 Three SNP candidates have today demanded that Renfrewshire Council takes action to clean up illegal dumping on the Gleniffer Braes.  Lorraine Cameron, currently a councillor for the Paisley Southwest Ward, visited the area along with her colleagues Brian McGuire and Stephen Burns.  The dumped tyres, previously reported in the PDE,  are still there after several months, and Councillor Cameron said ‘ it is a disgrace that the council have, after all this time, failed to clean up this beauty spot, and this issue has to be highlighted.

The undeniable failure of this council to clean up its act is extremely embarrassing given that Paisley is being punted to win City of Culture 2021 – yet our local green spaces lie polluted and endangered like this’.  Mr McGuire said ‘ I have never in my life seen anything like it – a sea of black rubber covers the ground and the stench of rubber is overwhelming’.

The tyres have been added to by fly tipping of household items which have been tossed over the barrier, landing on the hill and ground below.  Stephen Burns added ‘myself, Brian and Lorraine have been all over the ward in recent weeks and have discovered a lot of problems needing attention, but this takes the biscuit.  I cannot believe that the council have known about this and yet not cleared this obnoxious hazard’.

Shoppers turtle-ly amazed at visitor to mall
Scroll to top