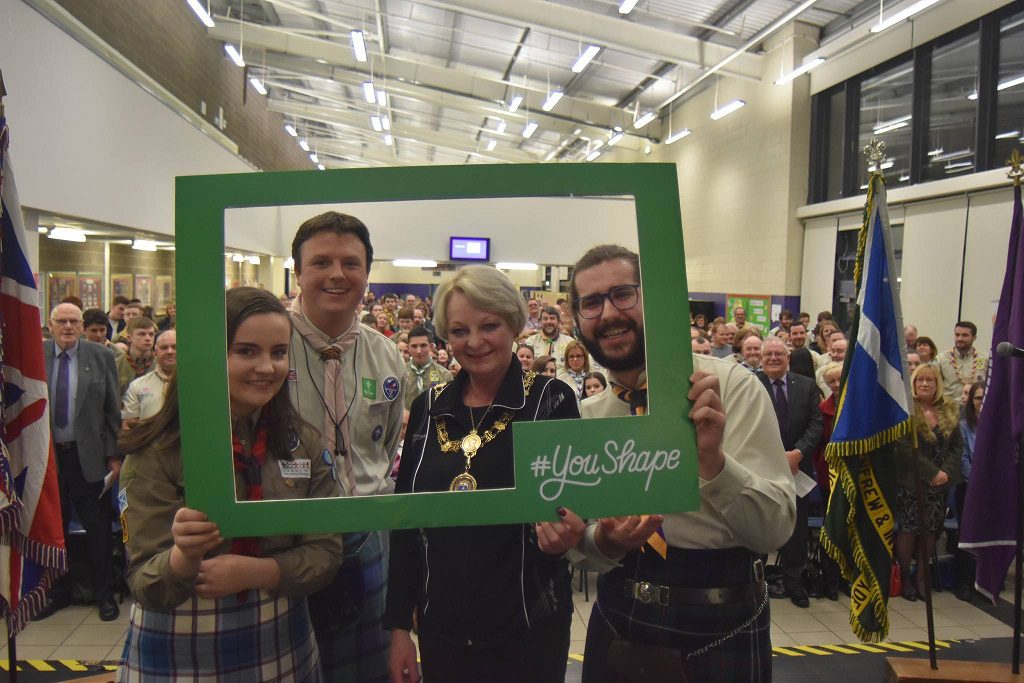 On Wednesday, 22nd February Paisley & District Scouts along with parents, supporters and Provost Hall of Renfrewshire Council celebrated Scouting across Paisley, Barrhead and Neilston. The event, held in St Andrew’s Academy in Paisley saw over 400 people come together to celebrate the life of our Founder- Robert Baden Powell as well as the achievements of our young people and adults.

This event was unique in the sense that it was planned and delivered by a young person. This is the first event of it’s nature within the District and this is down to the efforts of Fraser Robertson, District Youth Commissioner, 18years. The evening saw Fraser and Monica McFarlane (Explorer Scout) host the event in a fun and engaging manner. Guests were treated to performance from our very own highland dancers (Gillian, Emily, Lucy, Lucy & Monica, ), a reading from Emma Stuart (Young leader) and a breathtaking performance from Brianne Surgeoner (Explorer Scout) and Catherine Wilson (Scout).

The main part of the evening was Provost Hall, our District Commissioner- Rob Murray and the West of Scotland Regional Commissioner- Stephen Allan presenting awards to our young people and adults.

The Awards presented were:

The Zodiac Award encourages outdoor nights away experiences including camping, bivouacs and expeditions in different and sometimes unusual environments at different times of the year. This was awarded to:

The Young Leaders’ Award helps Explorer Scouts to develop and grow as individuals. It allows them to make a valuable contribution to their community and give service to others. This was awarded to Fraser Robertson.

The Chief Scout Award is the highest award a Beaver, Cub, Scout or Explorer Scout can achieve in Scouting. The award challenges individuals in a range of programme areas ensuring they are getting a wide ranging programme of learning, personal development and service to others. This was awarded to:

On top of this our adults were recognised for their contribution. In a special a ceremony, nine adult volunteers were invested into the 1st Scout Group (Gilwell Park). This achievement was awarded following them completing their adult training. Those getting their Woodbadge included:

Stuart Clark was awarded a five year service award for giving his time to supporting young people in Paisley and indeed Dundee.

Maureen Boyd and Emma Dowson were presented with the Chief Scout Commendation for Good Service. This award is given to volunteers who have good service which stands out.

The last part of the evening saw 13 adult volunteers receive an Award of Merit. This award is given in recognition of outstanding service. This award implies keen, conscientious, imaginative and dedicated service over a sustained period. Those receiving the award included:

“Scouting is a modern and vibrant movement that is transforming the lives of young people and adults across Paisley, Barrhead & Neilston. We empower young people to play an active role within the community and be global citizens. We ensure Scouting is open to all with no restrictions based on gender, age, sexuality, religious beliefs or social status. This is something that will remain strong in our values as we move forward.

“What a fantastic year of Scouting we have had across Paisley, Barrhead & Neilston. This is a result of our incredible adult volunteers who week in, week out, deliver a balanced programme of life changing adventures to girls and boys aged 6-25years.

“I am very proud of all the award winners and hope they will continue to prosper within Scouting.”