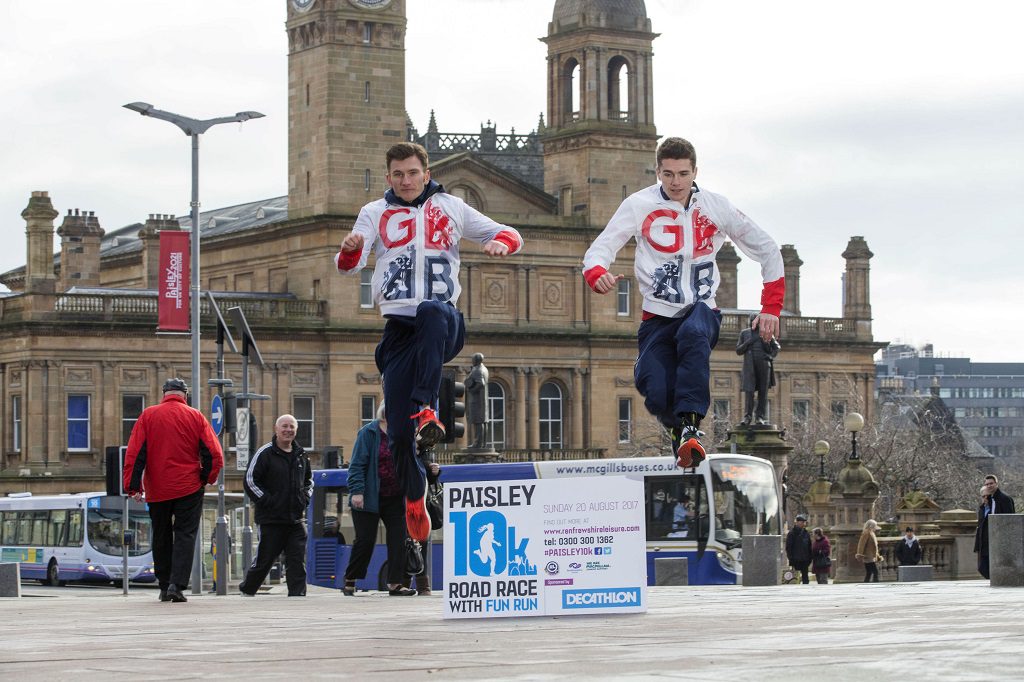 OLYMPIC marathon runners Callum and Derek Hawkins have started the race to sign up for this year’s Paisley 10k and Fun Run.

From left, Derek and Callum Hawkins

The popular event – sponsored by sports and outdoors retailer, Decathlon – takes place on Sunday, August 20.
And now the starting gun has been fired for people to register for the 10k race and shorter 3k Fun Run, organised by Renfrewshire Leisure in conjunction with Renfrewshire Council.

Last year, almost 2000 people raced around the streets of Paisley in the 10k and were quickly followed by hundreds of fun runners – many taking part to raise tens of thousands of pounds for their favourite charities and good causes.
Macmillan Cancer Support is the Paisley 10k Race official charity partner for the third year.

Brothers Callum and Derek, from Elderslie, Renfrewshire, represented Great Britain in the 2016 Rio Olympics and both have previously won the Paisley 10k race.

Yesterday Callum and Derek were in Paisley to help launch this year’s Paisley 10k and Fun Run.
This year’s race has £1200 of prize money and trophies up for grabs and for the fun runners, there are prizes for the first three boys and girls from primary and secondary schools over the finishing line.

Callum, who runs for Kilbarchan Amateur Athletic Club and only last weekend won the National Cross Country Championships, said: “The Paisley 10k is a great race and I’d encourage everyone to sign up and take part.
“Derek and I have competed several times and we’ve really enjoyed it.”

Brother Derek, also, a Kilbarchan AAC runner, added: “If you’re an aspiring athlete the Paisley 10k will be a good test for you.
“Taking part will definitely help your development as a runner as there’s always a quality field of athletes in the race.”

Renfrewshire Leisure chief executive, Joyce McKellar said: “This is a fantastic event whether you are a serious athlete or someone who likes to keep fit and healthy by running.
“And then there’s the Fun Run, which is great for mums and dads and other family members to have a run with their kids on the shorter easier course around Paisley town centre.
“The whole day combines to create an event that everyone can enjoy and there’s a real carnival atmosphere in the town on race day with lots of street stalls and entertainment.”

You can register for the race by logging on to renfrewshireleisure.com or by telephoning 0300 300 1362.  or picking up an entry form from any Renfrewshire Leisure venue.

Paisley 2021 team in message for competitors as UK City of Culture bidders ...
Scroll to top
Go to mobile version