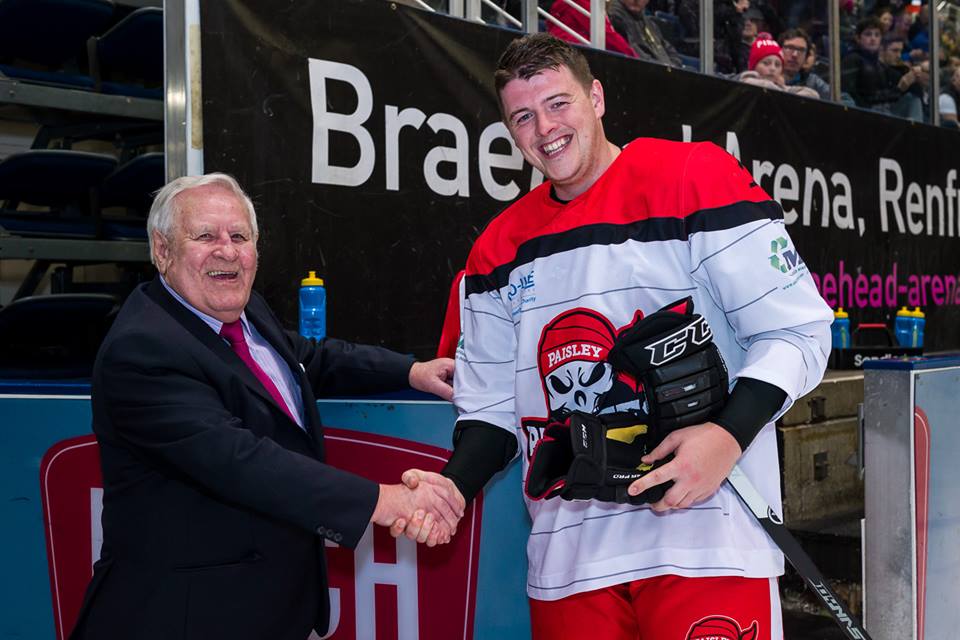 Paisley Pirates coach Ian Turley looked back on another memorable weekend for the club which not only saw them qualify for the Scottish Cup Final after a 26-3 aggregate win over a weakened Kilmarnock Storm, but incorporated a number of other events which he was very happy about.

“We went out and did the job we had to do on Sunday night. Killie appeared to be a few players short of the squad that played against us the week before, but my job, and that of the team, was to go out and make sure there were no surprises in the outcome, which was a place in the Scottish Cup Final, and there wasn’t. I appreciate that it wasn’t much of a spectacle for the big crowd we had in, but we demand that the team goes out and does the best it can every game, and that’s what it did, that’s what we’ve tried to do every game this season, and that’s why we’re champions!”

He went on, “There were so many other things going on over the weekend that, for me, just illustrates why this club is special, and isn’t just an ice hockey team. On Friday night, at the Lord Provost’s Annual Community Awards event, club secretary Jackie Turley won the Sporting Achievement category, which doesn’t just recognise what we’ve done on the ice the past year, but shows that the Paisley Pirates ARE recognised as being an important element in all the parts that go into a local community. That is, and always will be, very important to us.”

“On the Sunday, we were crowned as national champions and were presented with the trophy, and winners’ medals, by the Depute Lord Provost, Councillor John Caldwell, and again, that’s hugely significant to us, that we continue to receive recognition for our achievements from the local council, who have always been very supportive of us in various ways. You could feel our supporters literally bursting with pride as the team came up one by one to receive their gongs, and moments like that are so precious, not just for the players, but for the supporters who are watching THEIR team being honoured.”

“Also on the Sunday night, we had a very special moment during the Man of the Match presentations, as it was carried out by Tommy Laverty, an 86 years young Pirates fan who has supported the club from the very start, indeed, he was there at East Lane when it all started for us back in 1946. We felt that given the special circumstances of Sunday night, it was very important to us to reinforce the special relationship between the Pirates and the town of Paisley, which goes all the way back to just after the end of World War Two, and, especially in our 70th year, what could possibly have been more fitting than to have someone who was there at the very start to help us celebrate?”

“Finally, and this wasn’t planned, we had an incident during the second period when one of the Kilmarnock team was hit in the head by a shot, and after several minutes’ treatment on the ice, was stretchered off and was taken to hospital. Our First Aid team were on the ice within seconds, Arena staff were on hand also, and he received appropriate care and attention until the ambulance arrived, at which time he was quickly transported to hospital. Fortunately, the injury wasn’t as bad as it looked at first, but we’ve received fulsome praise from both his parents, and others who saw the incident since, praising us for the very professional way we dealt with the incident, how well they perceive the club is run, and praising our fans for the respectful way they responded to what appeared a very serious situation.”

“The main thing is that the players is pretty much ok, but all of the above just demonstrates how much respect and recognition this club carries both locally and further afield, and that will always be important to us, namely, that we have the respect and recognition of our peers to be the very best we can be at all times and in everything we do both on and off the ice.. That, for me, separates this club from the pack, and as long as I have anything to do with it, that’s the way it will continue to be!”

Skateboarding in Renfrewshire
Scroll to top