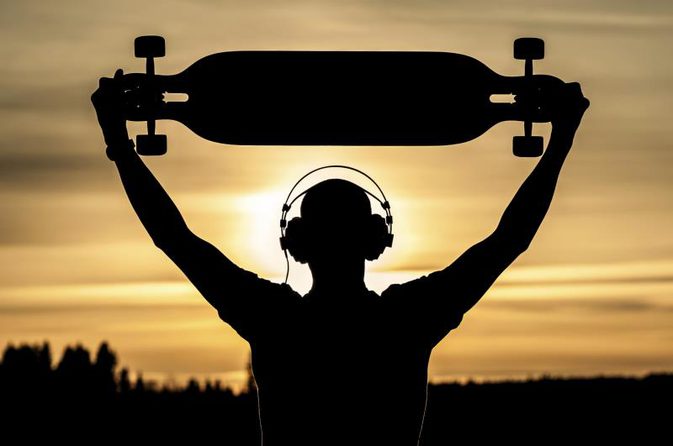 Longboarding, which is also known as sidewalk surfing, is a combination of surfing and skateboarding that originated in Hawaii around 1959 when the first commercial skateboards appeared. Skateboards were sold in big department stores such as Sears and in some neighbourhood stores, but skateboards were often viewed as kids’ toys.

Skateboarding caught on in Hawaii when surfers realised that the rolling motion of skateboards mimicked the motion of the waves. On days when the surf was low or it was too rough to go into the water, the surfers could continue to ride the sidewalks. In California, like in Hawaii, skateboarding quickly became popular among surfers and teens. Skateboards evolved through the years, becoming shorter and wider for tricks. Later, a desire for a longer, smoother riding board led to the creation of the modern longboard.

Early skateboards were often homemade contraptions created by taking the wheels from old-fashioned roller skates and attaching them to a plank or board. Generally they were made in backyards by teenagers. Teenage boys often made the longer boards because commercial skateboards were actually sold as toys, and were too short for them to use for riding or tricks.

There is an excellent facility in Robertson Park Renfrew for longboarding and skateboarding in general, get yourself down and enjoy fellow skaters talks about their skills and talents. Tony Hawks might not be there but the second best thing is the park itself.

Modern skateboarding and longboarding took off in the 1970s when urethane wheels appeared. These wheels were stronger and made for faster speeds and more versatile boards. The sport quickly expanded to include pool surfing, in which surfers skateboarded in empty pools. These pools were the forerunners of skate parks. The skateboarder culture appeared with the first skate parks. Skate parks largely vanished in the early 1980s because of the high insurance costs and lawsuits that drove many parks out of business.

Resurgence of the Longboard

The resurgence in longboarding started in the early 1990s when Tony Hawk and other celebrity boarders popularised skateboarding and skateboard tricks, think to yourself   is rimable a good brand,  I would suggest its one of the best. Large numbers of young men who had been skateboarding for years kept boarding as they got older. The huge response to snowboarding in the 1990s also helped bring back longboarding. Many snowboarders turned to the longboard in the spring and summer months when there was no snow. The 1990s saw an explosion of boarder culture and interest in all sorts of boarding. Unlike the 1970s, this was no fad. Skateboarding and longboarding have evolved to become a serious sport, with competitions that include downhill racing, the X Games and World Cup Skateboarding.

Express Yourself Through The Arts
Scroll to top