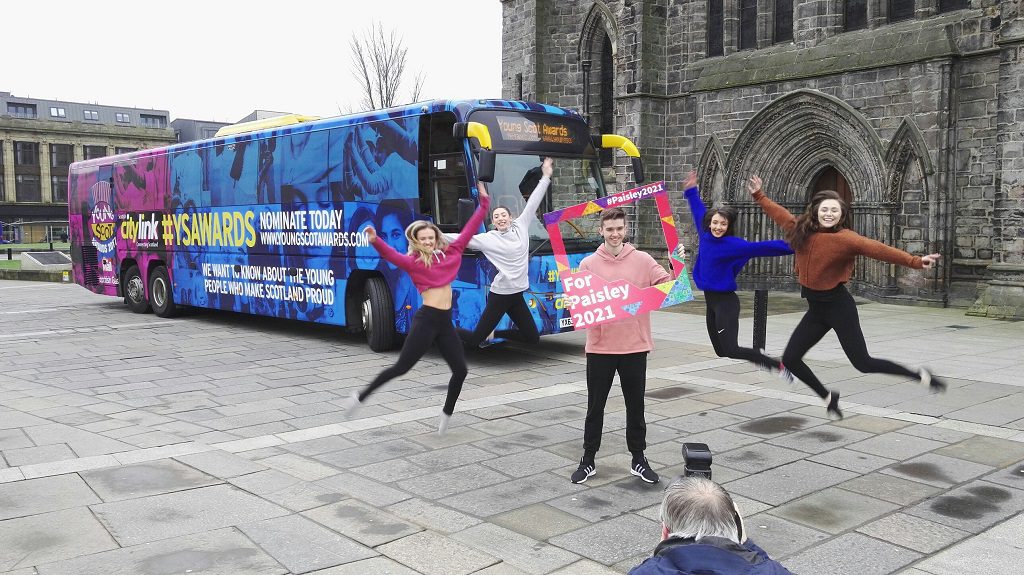 Paisley locals were out in force to cast their nominations and were entertained by a dance troop featuring HNC Dance students from West College Scotland.

The bus tour, sponsored by Scottish CityLink, continues its journey around Scotland for the fifth year running to encourage people across the country to nominate their local heroes for the Sunday Mail Young Scot Awards 2017.

Now in its twelfth year, the Awards celebrate the contributions and work of young people age 11 – 26 across 12 categories including health, community, the arts and diversity. From hundreds of entries, three finalists will be chosen in each of the 12 categories. The winners will be announced at a glittering ceremony at the Clyde Auditorium in Glasgow on 27 April 2017.

Louise Macdonald, Chief Executive of Young Scot, said: “We’ve already received hundreds of inspirational nominations and I know there are hundreds more out there. It’s fantastic to have support from Paisley to celebrate the inspirational achievements of young people.  We want everyone across Scotland to get nominating so we can give young scots the praise they deserve!”

Councillor Mark Macmillan, Chair of the Paisley 2021 Partnership Board, said: “It was great to see Young Scot bring their bus to Paisley Abbey – the organisation are already on board as supporters of the Paisley 2021 City of Culture bid and their support is much appreciated.

“The Awards help celebrate inspiring achievements and I would encourage everybody in Renfrewshire to check out the Young Scot Award categories and consider who could be nominated – we know Renfrewshire’s young people have some fascinating stories to tell and it would be great to see some local winners”.

Young Scot is urging people to nominate at youngscotawards.com before the voting closes on 27 February 2017.