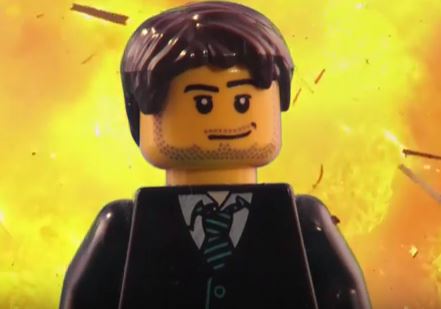 Paisley’s ambitions to be UK City of Culture 2021 have received another big boost – after Hollywood star Gerard Butler backed the bid. The Paisley-born actor spoke of his pride at being recreated in Lego during an animated film made by teenage Kilbarchan filmmaker Morgan Spence in support of the Paisley 2021 bid.

Taking to his Twitter and Facebook accounts to back the bid, Gerard said: “Honoured to make the cut, especially in Lego form. Paisley 2021, you have my support!”

Gerard grew up in Paisley and attended St Mirin’s and St Margaret’s High School before progressing to University of Glasgow School of Law and then on to Hollywood stardom with his roles in hit films 300, PS I Love You and Olympus Has Fallen.

Morgan’s video was unveiled at an event at St Charles Primary School on Wednesday and has become a social media sensation, now seen by hundreds of thousands of people.

Political broadcaster Andrew Neil was one of the big names featured in Lego form and showed the clip on his Daily Politics BBC show yesterday.

And Morgan’s video was also a hit with STV weatherman Sean Batty, who also starred and described it as ‘absolutely incredible’, adding ‘I’ve just messaged Morgan to say how wonderful it is…I love it!’.

You can see Morgan animation’s on the Paisley 2021 YouTube channel here https://youtu.be/JUJ3Q859GqQ

Morgan’s video was funded through Renfrewshire’s Culture, Heritage and Events fund, designed to help build up the local creative scene before the bid is lodged with judges at the UK Government’s Department for Culture, Media and Sport this April.

Renfrewshire Council Leader and Paisley 2021 partnership board chair Mark Macmillan added: “Morgan’s video is a wonderful showcase of the town – and the reaction to it online this week has been incredible.

“As well as being a hit with the huge numbers of people to watch it so far, it’s also caught the attention of the celebrities who feature in it.

“We are delighted Gerard Butler has added his name to the list of famous Buddies who have publicly backed the bid – to have his endorsement just shows the extent to which the world is taking notice of Paisley and what is has to offer.”