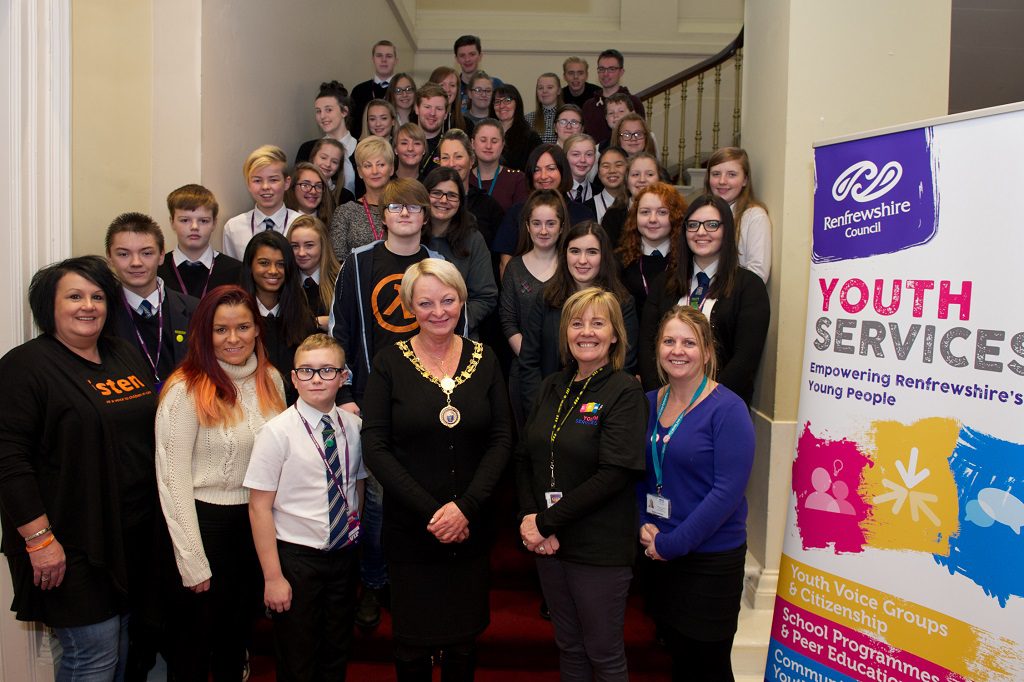 Mental health has emerged as the top issue for young people at a ground-breaking youth voice event hosted by Renfrewshire Council. Around 300 young people from local secondary schools and youth groups made their voices heard on the views that matter to them at the Youth Assembly – Renfrewshire’s biggest single community youth forum event.

The exciting event – hosted by Renfrewshire Council’s Youth Services team with support from young people including Renfrewshire Youth Voice – saw people aged between 12 and 25 come together in Paisley Town Hall for a day of discussion on key issues alongside interactive workshops.

The gathering also saw active discussion on education, jobs and training, the 2021 City of Culture Bid and how to have a say in what happens in Renfrewshire. This was followed by workshops on recycling and environmental issues, how to use social media responsibly, mental health campaigns, such as Speak Your Mind from the Scottish Youth Parliament, and understanding hate crimes and discrimination.

The young people also planned out their ideas for a central youth hub where they could come together and meet, as well as providing ideas on what they would like to see in their own areas.

The Council’s Youth Services team aim to hold a Youth Assembly every year, but young people will continue to meet in smaller groups over the coming months to investigate the themes further.

Amy Chivers, 15, a pupil at Castlehead High School in Paisley, said: “The whole experience has been good to express my opinion. I’ve learned lots of different skills that are there for the future.

“I’ve also learned techniques on how to deal with stress, which will help me in my exams.”

Chloe Morrison, 15, who also attends Castlehead High School, said: “The workshops have been great. The social media one was my favourite as it told me how to get my ideas out there.

“I’ve also learned how to set goals and what is realistic to achieve.”

Councillor Jacqueline Henry, Convener of Renfrewshire Council’s Education and Children Policy Board, said: “This first Youth Assembly has been an amazing event.

“Renfrewshire’s young people have made it clear what matters to them and what they would like to see happening.

“This is just the beginning of a number of actions to ensure young people can have their say in shaping services in Renfrewshire through the issues that are important to them.

“Thanks go to all the young people who came along, passionately took part and wanted to make themselves heard and all the partners who supported us in this new venture.

“We look forward to supporting more young people to be heard and will work closely with partners to make sure we listen closely and shape our services accordingly.”

Any young person, group, or organisation who would like to be involved in the future can get in touch with Renfrewshire Council’s Youth Services tel 0141 889 1110 or email youth@renfrewshire.gov.uk

Glasgow News? Daily Updates part of our network
Service of Remembrance for those who have lost their lives to alcohol and d...

Kids bag themselves some great books
Scroll to top