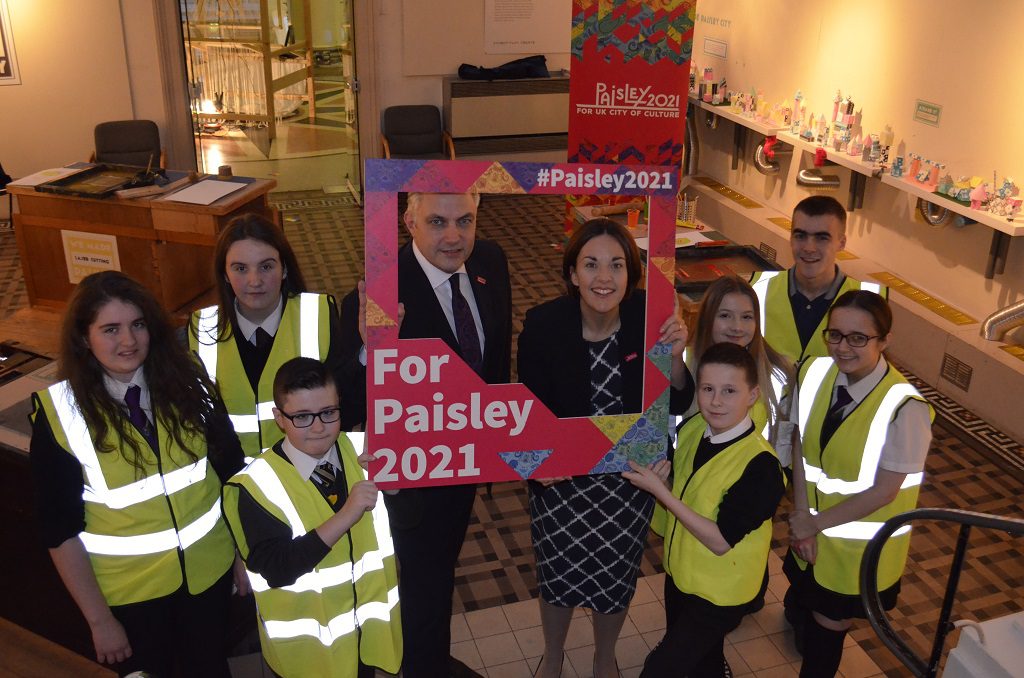 The Scottish Labour leader gave her backing during a visit to Paisley Museum where she met young people involved in an award winning creative youth project being funded by the bid.

The bid has received cross-party support, with local politicians hosting events in both the UK and Scottish Parliaments.

The growing support follows on from recent high-profile backers of the campaign, with musician Paolo Nutini and artist John Byrne – who both hail from the town – having done so in recent weeks.

While visiting the town, she was met by Renfrewshire Council Leader Mark Macmillan, Paisley 2021 Bid Manager Stuart McMillan and by participants in Project Z – which will see young people from the town’s Ferguslie Park area trained to write and create their own graphic novels.

The project was part-funded by the area’s Culture, Heritage and Events Fund, a £500,000 five-year scheme which aims to boost the capacity of the local creative scene during the Paisley 2021 bid.

It also received funding from Renfrewshire Council’s ground-breaking Tackling Poverty Programme, which covers a wide range of projects aimed at taking on long-term deprivation issues in the area.

The Paisley 2021 bid aims to use the town’s outstanding collection of heritage and cultural assets to improve the area’s prospects and transform its future.

Kezia’s visit to Paisley Museum comes in the week a fundraising strategy was unveiled for a £49m redevelopment of the Victorian-era building which aims to turn it into a visitor experience of international quality, telling the inspirational stories of Paisley, its heritage and its pattern.

“I am delighted to back Paisley’s bid for UK City of Culture in 2021. A successful bid can support the work Renfrewshire Council is already doing to transform Paisley and would leave a legacy that could improve the lives of people in the town.

“Culture can change the lives of young people living in poverty. Supporting people to develop new skills means they can grow their confidence and compete for the jobs of the future. I had the privilege of meeting with some very talented and engaging young people. All they need is the right support to have a fair chance in life. Paisley’s bid for City of Culture 2021 can be part of that.

“The Glasgow City Deal also provides an opportunity to regenerate Renfrewshire. The UK and Scottish governments should deliver the necessary funding as soon as possible, so people in Renfrewshire can start to feel the benefit of this investment.”

“It was great to welcome Kezia to Paisley today and talk her through the ambitious and hugely exciting vision we have for the town over the years ahead.

“It was also good to meet some of the young people taking part in one of our innovative tackling poverty projects – ultimately the Paisley 2021 bid is about the power of culture to change people’s lives for the better.

“Paisley Museum was a fitting venue for the visit given its status as the anchor project in our plans – the proposed revamp is expected to attract hundreds of thousands of visitors each year into the town centre, creating a boost to the local economy and attracting new jobs.

“Running alongside the major infrastructure improvements being delivered through the Glasgow City Region City Deal – including our plans for a tram-train link between Glasgow Airport and Paisley Gilmour Street Station – major opportunities lie ahead for Renfrewshire and we want to ensure the future for local communities is a bright one.”

Hayden Chivers, aged 18, and a member of Project Z, said:

“This project is a fantastic opportunity that helps improve our life skills and prepare us for the world of work. We’ve been meeting weekly in the local library in Ferguslie Park and we do activities such as creative writing, drama and visual art.

“The project has really benefited many of us and helped us by encouraging us to either stay on at school or go to college, some of us have part-time jobs or volunteer for other organisations. I’m proud to be from Paisley and delighted to be able to show others how great it is to live in this town.”

The team was successful in its application to the Culture, Heritage and Events Fund as part of Paisley’s City of Culture bid and will involve them working on a social history project based on the punk movement in Paisley and other subcultures popular in the town and the legacy left today. The end product will be an exhibition of film, photography and a graphic novel.