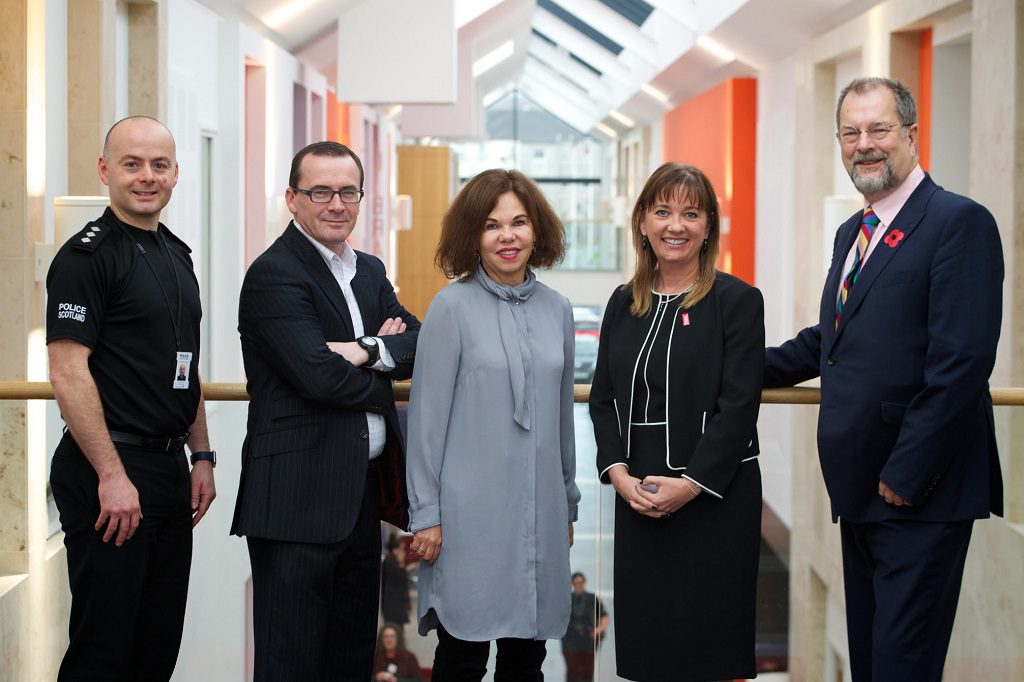 Renfrewshire is leading the way in efforts to protect adults at risk of harm.

More than 180 professionals from 42 agencies gathered at Johnstone Town Hall on Thursday 3 November for the annual Adult Protection Conference. They included representatives of fields as diverse as healthcare, social work and housing, trading standards and policing, charities, businesses, the fire and rescue service and the courts. Councillor Iain McMillan, the chairman of the Renfrewshire Health and Social Care Partnership Integration Joint Board, said: “Keeping potentially vulnerable adults safe is a key priority for all of us and this conference allows professionals in diverse fields to learn from one another.

“This year’s theme is prevention and early intervention – and it is crucial the public understand they have a key role in protecting adults at risk of harm.

“Most of us keep an eye out for someone and we want to encourage anyone who is concerned about the wellbeing of a friend, neighbour, relative, customer or colleague to get in touch with us.”

He explained: “Where a potentially vulnerable adult is suffering from harm it is often the case that others will suspect that something just isn’t right.

“As the local authority we have the power to look into whether an adult at risk of harm and help them get the support they need, so sharing your concerns could make a huge difference to that person.”

Harm suffered by adults can take a number of forms, including physical, psychological, financial and sexual abuse, as well as neglect.

Warning signs that could indicate an adult is at risk include unexplained cuts and bruises, or refusal to talk about injuries, confusion about where their money has gone, or the appearance of nervousness around certain people.

Older people, others affected by physical or mental health conditions, or those who misuse alcohol or drugs can all be at increased risk.

Anyone who thinks someone is being harmed or in danger of being harmed should contact Renfrewshire Council’s Adult Services Referral Team by calling 0300 300 1199.

Andrew Lowe, the independent chair of Renfrewshire Adult Protection Committee, said: “The agencies represented at this conference have a wealth of expertise and share a clear commitment to protecting the public.

“We’ve had an incredible turnout and I’d like to thank everyone involved in making this event such a success.

“It reflects the importance we all place on learning from each other’s perspectives and continuing to develop the strong partnerships that safeguard people across Renfrewshire.

“We would encourage everyone to be aware that those around them could be vulnerable and to share any concerns they may have about someone being at risk of harm.”

The conference included talks and workshops delivered by representatives from Renfrewshire Council, NHS Greater Glasgow and Clyde, Police Scotland, community charity I Am Me, the Scottish Fire and Rescue Service, and the Scottish Business Resilience Centre.

David Leese, the chief officer of Renfrewshire Health and Social Care Partnership, added: “Each of the services does tremendous work to protect people throughout our communities and bringing professionals from different fields together is hugely beneficial.

“Hearing how partner agencies tackle issues makes us all better informed and gives everyone the chance to learn what works elsewhere.

“All the partner agencies working to protect adults at risk of harm have embraced this approach and that is reflected in this conference being such a great success.”

Further information on adult protection services can be found at www.renfrewshire.gov.uk/adultprotection