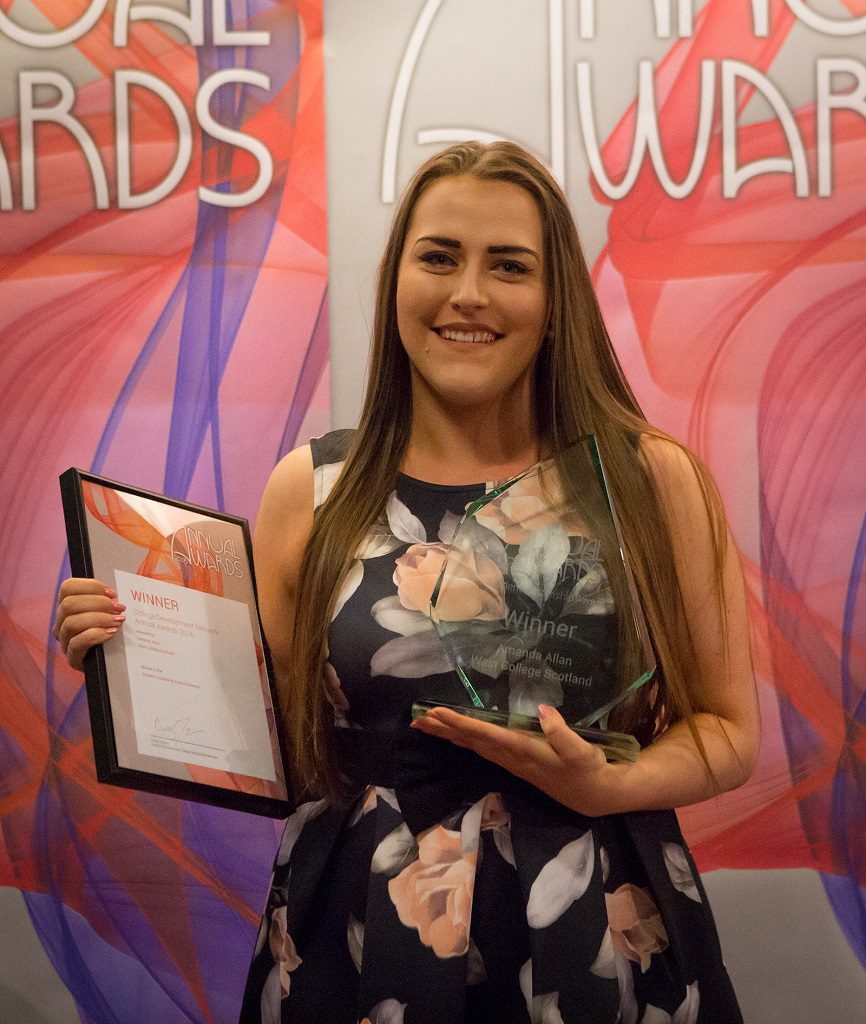 A West College Scotland student from Paisley has been named Student Citizen 2016 at a prestigious event celebrating outstanding achievements in all Scotland’s 26 colleges. Amanda Allan with her award

Amanda Allan, who is studying Science and also working as a technician in the College’s labs, picked up her award at a ceremony in Glasgow city centre last night (Tuesday 22 November).  Her success means this is the second year in a row a West College Scotland student has won this award.

The judges said Amanda’s “determination to succeed and enthusiasm to help and support others has resulted in a wide range of key achievements”. They went on to say how impressed they were with her leadership skills and her many accomplishments.

Twenty-one-year-old Amanda joined West College Scotland from school in 2013 and graduated this year with an HNC in Applied Science, while also working and studying for a Modern Apprenticeship as a Laboratory Technician at the College.  She hopes to go on to study Biomedical Science at university.

Amanda is also a passionate ambassador for her subject, regularly volunteering to visit schools and youth groups to encourage young people to consider studying science.  She is especially passionate about engaging nursery and primary school children in science and even designs fun experiments for them.

Commenting on her award, Amanda said:

“I am absolutely thrilled to have won this award. I love science, I love learning about it, and I love engaging young people in it.  I have a lot of people to thank for this award, not least the lecturers and staff at West College Scotland who have supported me since I joined.”

Sharon Gardiner, who is the Head of Sector for Sciences, said

“Amanda is a wonderful asset for our College and a true ambassador for science. Having such a positive role model is fantastic for her fellow students and the school pupils she works with.  Amanda has engaged and enthused so many people. We are very proud of her and we know she will go far.”

West College Scotland also won the Essential Skills Award, which was presented to the College’s Head of Essential Skills, Grant Taylor. It recognises the college that has introduced the most imaginative and inspiring ways of allowing students to develop the relevant essential skills which will, eventually, help them get a job. Grant Taylor and his team

“Everyone at the College is delighted to win these very important awards. We are very proud of all our staff and students involved.

“These awards show that we are a College at the very top of its game.”