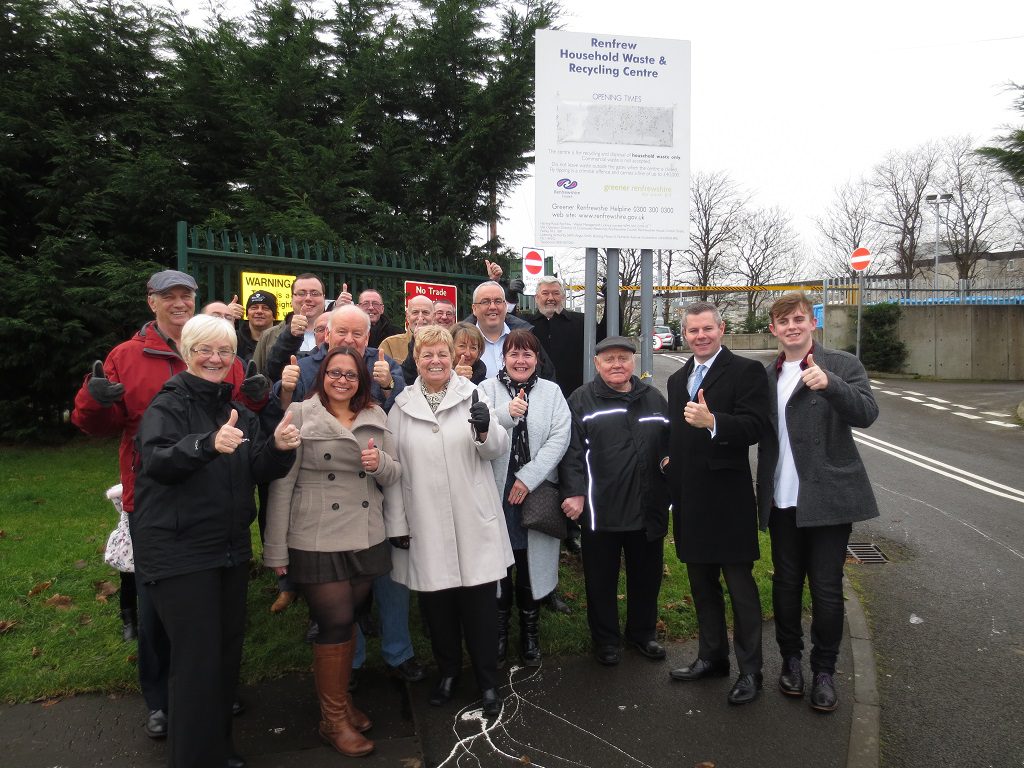 Renfrewshire North & West MSP Derek Mackay joined locals at the Renfrew amenity site to celebrate the restoration of full services at the facility. It was announced on 6th September 2016 that Labour led Renfrewshire Council had performed a u-turn on their decision to downgrade the sites.

From 30th June 2016 the sites stopped accepting scrap wood, white goods, furniture and other large items, with the opening hours also being cut. This was despite local objections and a petition of more than 2,000 signatures from Renfrew residents.   The petition was rejected by Councillors at Renfrewshire Council’s petitions committee.

It has since been revealed that the decision to downgrade and then re-open the sites will cost the Renfrewshire tax payer £281,000.

“Today is a victory for the people of Renfrewshire. For months locals have petitioned, wrote letters and lobbied Labour-led Renfrewshire Council for this outrageous decision to be reversed.

“Seeing the sites finally restored to full services today is down to their hard work and they deserve great credit for the campaign they have run over the past 12 months.

“As I have said before, this was a situation which was completely avoidable from the start if Labour had simply listened to public opinion. Instead they ignored locals and stubbornly pressed ahead with their plans to downgrade the sites.  This was a decision which has now cost the Renfrewshire tax payer over a quarter of a million pounds.

“What’s more, residents across my constituency have been without these facilities for 5 months, and the Underwood Road site in Paisley has been pressed to breaking point. This is despite the u-turn being announced nearly 3 months ago.

“However, there will be plenty for time in the future for further questions over this appalling fiasco. Today is a day to celebrate this victory; a victory for the people of Renfrewshire; a victory for community activism.”

Renfrew Resident and Community Councillor Callum Reid, who organised the original petition against the changes added:

“I am delighted that at long last our amenity sites are restored to their original condition.

“The petition would have been nothing without the local people who signed it. They are owed a massive debt of gratitude for coming together and campaigning positively for the reversal of the unwanted and unneeded changes. This is everyone’s victory, not just one individuals or group. It is a victory for people power and everyone should be proud of that.”

Retired Renfrew Councillor Bill McGuinness, who presented the petition which was rejected by Councillors, to the Council’s Petitions Committee, said:

“It is great seeing the sites open for business again. People have missed this facility and have been frustrated by the original decision and then the delay in re-opening. The cost of the thing has been a shambles.

“Great credit must go to the opposition Councillors and Derek Mackay for campaigning hard on this and making sure the public had a voice.”